We sat in on a conversation at the Gorman headquarters as Lisa Gorman and artist friend Rhys Lee discussed their recent collaboration. 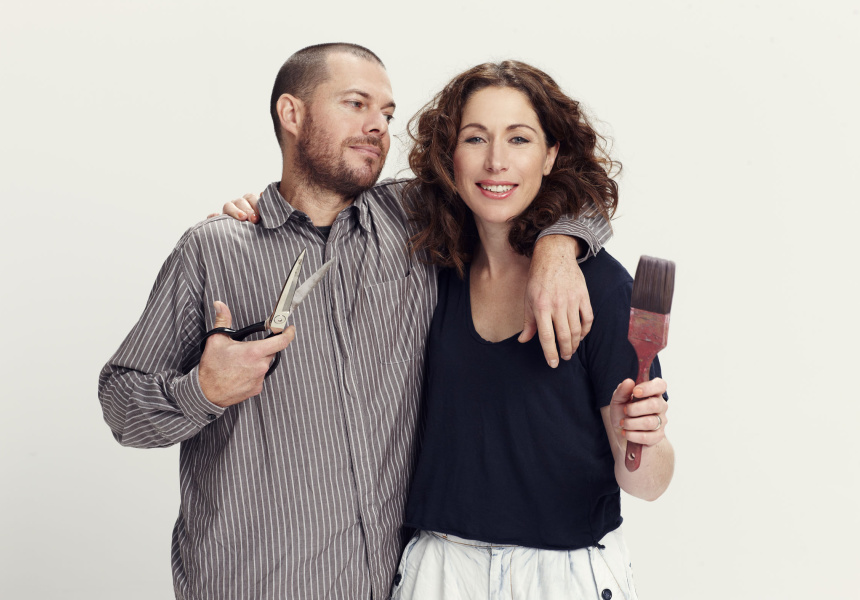 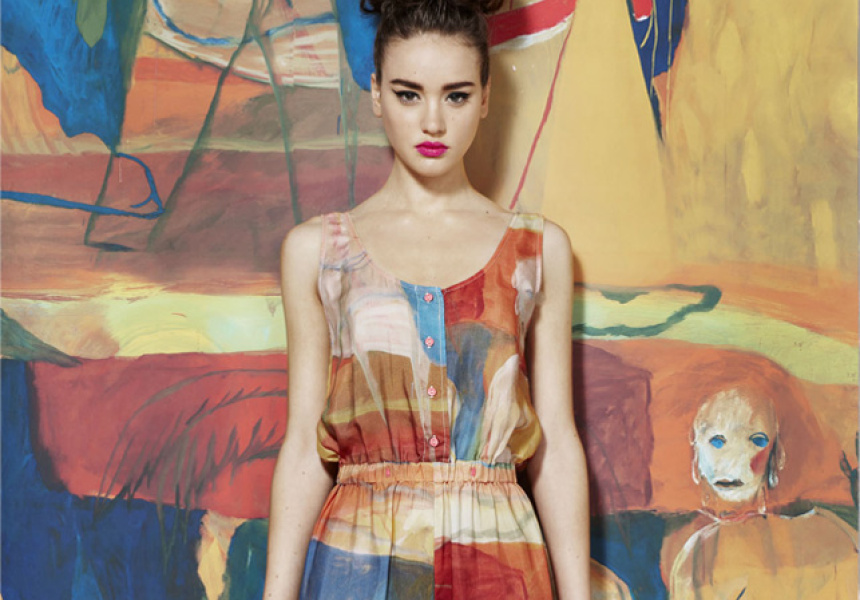 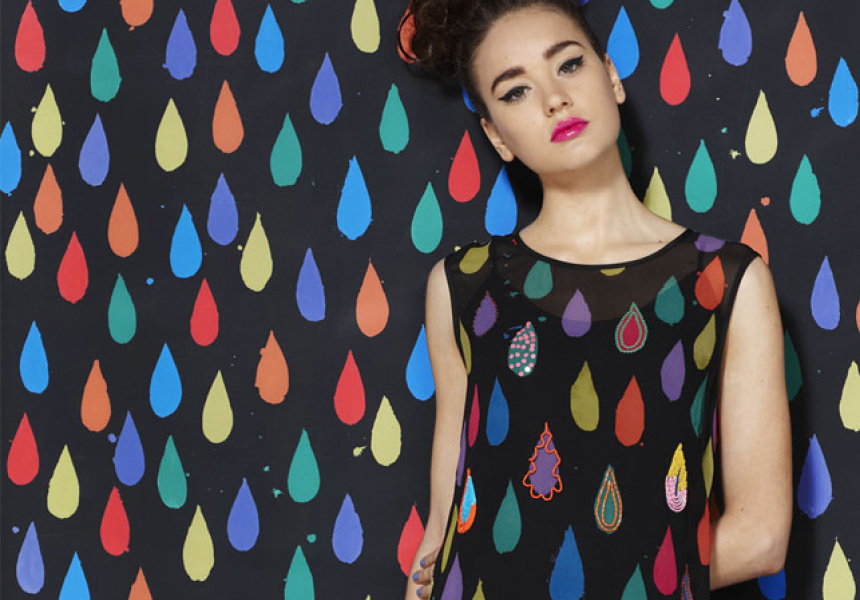 These days, Lisa Gorman might be considered somewhat of a matriarch to the wave of budding Australian designers. She has been around for long enough (since 1999) to know what’s what, but still has enough nous and credibility to keep the brand on track and to keep many coming back season after season for her latest ideas and developments.

One of these recent developments is a numbered, limited edition collection designed in collaboration with her good friend, artist Rhys Lee. Just before the range hit stores in September, the two caught up at the Gorman headquarters in Abbotsford to chat about the collaboration.

Rhys Lee: People often do collabs and they’re not necessarily friends and they don’t necessarily know each other that well. We’ve been friends for a bunch of years.

Lisa Gorman: I’ve got a lot of Rhys’s work and…

RL: She has lots of my work on the wall in her house.

RL: And that automatically makes me like Lisa, because she likes my work, likes what I do, you know, she’s stuck her hand in her pocket over many years and supported me so…

LG: And I’ve done that because I love the work, you know. I mean, the first pieces of work I bought of Rhys’s was back at Fat52 – the little pieces on collected bits of wood. I bought three of them from that show; most of them are grey lead drawings.

LG: 1999. It was the year I started Gorman coincidentally. You had your first mini show at the Fat store with Kim and Rach and the girls.

RL: And that’s how we know each other, really… They really stuck their hand out and they took me under their wing and that’s how I met you.

LG: Yeah, I think we probably met at the shop, at your first show…because of my friendship with the girls at Fat. I was actually sharing a house with them at the time, so I came to the show, bought Rhys’s work and then started my own label later that year, because we were all surrounded by the same sorts of stuff. It was quite a significant time.

RL: It was a good time, lots of things were happening.

LG: Yeah, there was lots happening in Melbourne at that time. Opportunity was abound. One of Rhys’s most famous early works was the green dog and it was referenced a lot in the press you were getting and it was on the front of the catalogue for that show.

RL: Because you only buy the pieces that are on the cover of catalogue, yeah (laughs)?

LG: No! But I was lucky enough to get that one. And there’s a similar one… This is a hilarious story actually – you tell it.

RL: Well, Lisa bought this painting of mine – of this green dog – and it’s got its mouth wide open. It looks like a dingo, kind of graphic and dark with teeth, acrylic on canvas. Anyway a good friend of mine wanted the painting and I was like ‘You can’t, it’s already been sold, Lisa bought it’. But I needed the money at the time, so I painted him a very similar painting, almost identical. Anyway, this guys ends up moving in next door to Lisa, so I had to tell her.

LG: He lives next door to me in Fitzroy (laughs)! But weirdly, I’ve never seen it.

RL: But what’s hilarious is that because I’ve told him about your painting, he’s like ‘It’s okay mate, it’s stashed out the back, she’ll never see it’. He keeps it hidden because he’s too scared to hang it in his house.

LG: So getting back to the collaboration, we’d talked about it for years…

RL: And I guess I’ve always played with the idea of doing collaborations with different people and then at the last minute pulled back from it, just thinking it might not have been such a great idea. When you show through galleries, you have this idea instilled in you that this thing [your work] is this precious thing and a one off and as soon as you take that and stick it on a garment worth however much it is – two, three hundred dollars – I’ve always struggled with the fact that this brings the work down to another level, taking away from it. It’s exposure in a different way and I’ve kind of always struggled with that, but this time I didn’t really care, I just got over it.

LG: I think that was something I was always thinking about for Rhys and is something that I am really conscious of when collaborating with artists. There are some artists I’ve collaborated with who are used to volumes of product, like Rachael Castle last year. However, Rhys does one of something and I’m quite sensitive to the fact that that one artist is going to see maybe more than one of his pieces on girls walking down the street…I mean we haven’t done big runs of the Rhys Lee stuff because it’s an exclusive thing and not super commercial work, so we don’t want it to be everywhere and we don’t want to do heaps of it. You don’t want to feel like you’re commercialising something that shouldn’t be commercialised. But I think now that the collaboration is done and I’m looking at it, it isn’t doing that, which I’m really pleased about, because what Rhys has done is patterns. The work is designed to go onto clothing. But I am quite conscious of not giving much of a brief at all. Basically it’s like ‘Do you want to do something together?’. Really, that’s it.

RL: And it comes down to, do you have a similar idea about things? Then you don’t really need to have a huge discussion about the finer details.

LG: If you mutually like each other’s work and respect each other’s work, I think you can’t collaborate successfully without that. So the thing I love about Rhys’s work is the form and colour. While it can be dark at times it, I found it really youthful and fresh and that came through the use of colour, neon and this naivety it has to it. I don’t know, I’ve never really had to describe your work and I’ve never really had to sit down to tell anyone why I like it. I can walk around my house and Rhys’s shows and it’s instant, the pieces that I love. I don’t know, I guess it’s the same as clothing. I can’t always tell you why I think a piece of clothing is great; it’s visual and it provokes an emotion that you can’t always describe.

But it’s been really great fun doing this. I feel privileged to do collaborations with artists and Rhys in particular, because as a clothing brand it can be so two-dimensional – it’s season on season and month on month and there’s no stopping. It’s quite a treadmill. So it’s really lovely for me to step off that and start to do things like this.