In this home, fashion and food go together better than expected. We chat to Sunday Style’s junior fashion editor, Emma Freebairn, and co-owner of Shuk Cafe in Bondi, Yoni Kalfus. 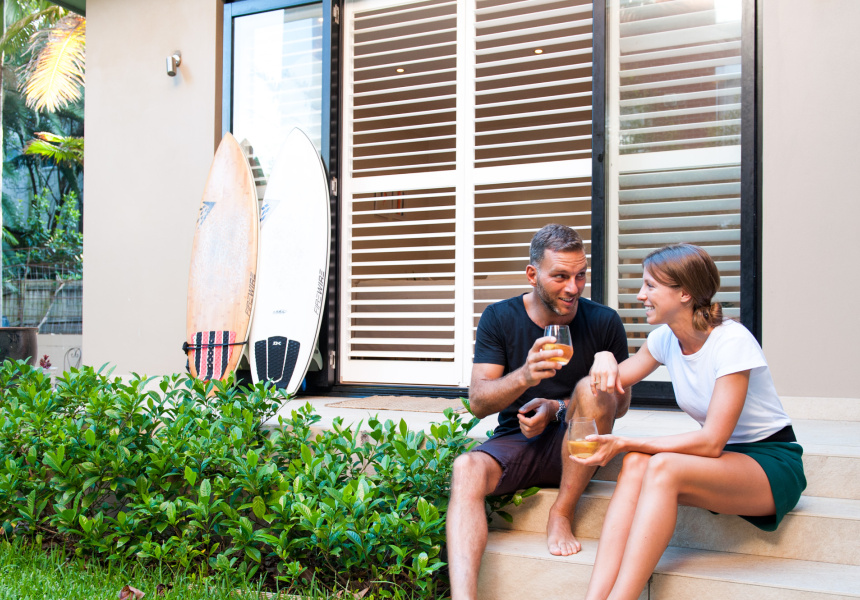 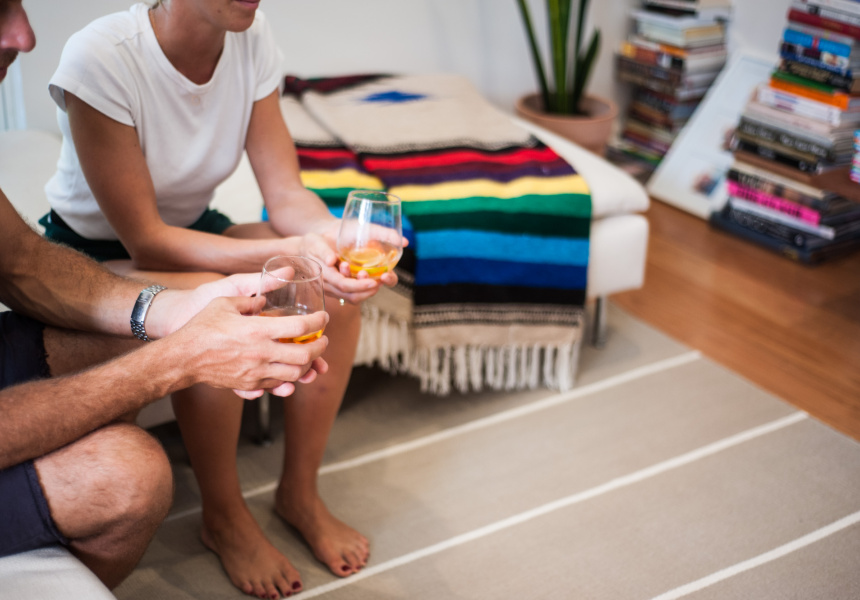 It’s not a common trait in Australian men to approach women outright for a date, let alone to persist after several polite rejections. In the case of Emma Freebairn, junior fashion editor at Sunday Style and her partner Yoni Kalfus, co-owner of Bondi’s Shuk cafe, it took six months before their first date. “He asked me out quite a lot,” says Emma. “Like once a month … He (an Israeli) is definitely different to Australian boys.”

Four years on, it’s easy to be in the company of these two. We’re sitting inside their Diamond Bay home, an open, light space, which stretches out onto a low grassy garden shaded by trees. They’ve mixed up a Spritz and perch together on their wide couch as we talk.

Yoni arrived in Sydney 13 years ago for a holiday from Tel Aviv, following a four-and-a-half-year stint of military service (three years is compulsory for all Israeli men over 18). Drawn in by the sun, surf and freedom, he never left. He worked in a Paddington cafe, then went on to co-own Mint Cafe in Surry Hills where he met Emma, who bought her coffee there each morning. Yoni opened Shuk in Bondi last year with two partners, both also Israeli, that he met in the surf. “I heard [people speaking] Hebrew and we started eyeing each other off, like ‘I’m the Israeli!’” says Yoni. A fierce friendship grew, fused by surfing together every weekend. Soon after, the concept for Shuk was hatched.

The inspiration for the cafe, now one of Bondi’s busiest, sprung from the buzzing marketplaces of Tel Aviv. In Israel, it’s common for cafes and bars to specialise in one item – whether it be shakshuka (eggs poached in a spicy tomato and capsicum sauce), hummus or pastries. At Shuk, the team aims to bring the best of it all, combining a cafe, bakery and deli. “We’re [all] very competitive in a way,” says Yoni. “We were in the army, so we have that fighting spirit. I think if we had to copy Shuk into Tel Aviv it would be a very different story, a much harder business to run, with a lot more competition.”

Unlike Yoni, Emma’s career didn’t start in the army, but in Adelaide. After relocating to Sydney in 2009, and landing a coveted internship with the fashion team at InStyle while studying, she soon accepted a full-time position as fashion assistant. Just over a year later she moved across to The Sunday Telegraph’s immensely successful fashion and lifestyle insert, Sunday Style, where she now works as junior fashion editor. It’s a role she’s relishing, even though, “it’s not what you see in movies.” Moving into the beauty space is also an aspect of the industry she’s enjoying learning more about. “Beauty wasn’t really something I was interested in, but I’m at a point where I’m quite obsessed with it,” she says. “I do like going to the showings and seeing all the new things, too, I’m not someone who wants to sit in an office all day.”

After getting engaged two years ago while on holiday in Europe, Emma and Yoni will marry in Tel Aviv in July this year, something very important to Yoni’s father. “My father made me swear. He said to me, ‘I don’t care what you do, you can have 10 weddings, I just want one. The most important one is in Israel.’” Israeli weddings are typically huge, and the couple struggled to find a venue that would fit their “small” party of 150 guests, but at least that will ensure room to move. “It’s all dancing, all drinking,” says Yoni. “[Israeli weddings] usually end in the middle of the morning.”

Emma ordered her wedding dress online with little fanfare, something one would think to be unusual in the fashion set. She describes the wedding preparations in her lovely, grounded style – the stress of planning something on the other side of the globe unapparent. It’s this groundedness in her work and her nature that drew Yoni to her, something he still finds calming. “I just love that she’s free,” says Yoni. “Emma comes to Shuk in the most beautiful dress and barefoot, like she just wants to go to the beach. I remember our first trip to Israel. We were in a room with a bunch of Israelis struggling to speak English with her, and she just made her way through the room and everybody got to know her. She’s really independent. I love it.”

For Emma, it’s a similar characteristic in Yoni that won her over. “There’s not really any drama in our lives, which I love,” she says. “He’s one of those guys that kids swarm to and everyone calls. The go-to guy when you have a problem or just to feel good about yourself. And he’s a really good cook. That probably won me over more than anything, our love of food.”