It was all systems go on day one of Mercedes-Benz Australian Fashion Week. We round up the day’s highlights. 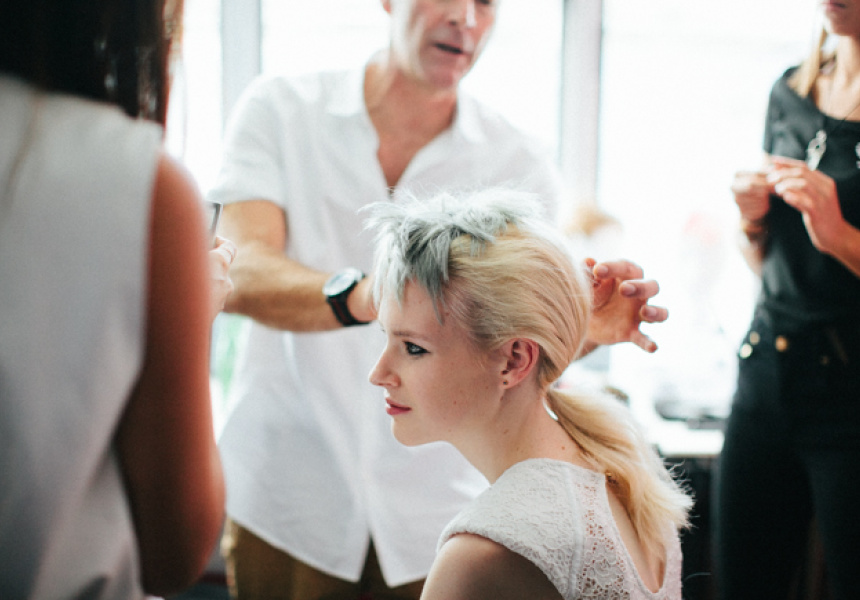 Alessandra Ambrosio at Alex Perry, Gerard Butler at Ellery, Susie Bubble at Karla Špetic … It was a day of celebrity sightings and grand entrances. The mood? Celebration, anticipation and excitement. School’s back. And so is the ’90s, with clean, minimal looks striding down the runway at Kahlo and Ellery and more outré signatures – logomania, streetwear and sporty touches – at Gail Sorronda and Karla Špetic. Here are our wrap-ups.

Ellery
Music: ’80s synth-punk, directed by Graz Mulcahy and mixed by Marc Dwyer
Hair: Low ponytails, with super-textured top hairpieces, held in place by custom headbands by Henson jewellery (which also designed the models’ delicately twisted nose and ear cuffs).
Beauty: Matte skin, with slim and precise cat-eye flicks.
Key piece: Julia Nobis in the show’s closing look: an origami-pleat, embellished bustier and slim-fit kick flares, all in semi-sheer organza.
Overall feel: Nobody does directional better than Kym Ellery. This season, Ellery’s trademark volumous and architectural silhouettes were cast in alternating light and dark shades, referencing religion and astrology. The silhouettes were outsized and fluid; hems trailed the floor and shirt cuffs drooped over wrists.
In her own words: Ellery commented: “This season it was really about creating looks that an Ellery girl would wear on the red carpet.”

Desert Designs
Music: Tribal beats for dancing.
Hair: A network of intricate braids drawn together in buns or ponytails.
Beauty: Soft, fuzzy brows and sculpted, bronzed cheekbones.
Key piece: Samantha Harris in a zebra-print, sleeveless, puffer hoodie.
Overall feel: Earthy – with just a touch of magic. With a set that featured huge, powerful crystals and a show with a dance intermission and body paint, Desert Designs captured a little bit of mythic, epic Australia in its collection. Marking the debut of Alvin Manalo as new head designer, the range also expanded to include menswear, childrenswear and swimwear.
In her own words: Desert Designs’ co-creative director Caroline Sundt-Wels, commented, “We were inspired by three of Jimmy's stories [Jimmy Pike, the late Aboriginal artist], by love, water and each other.”

Karla Špetic
Music: ’80s pop-rock.
Hair: Wet look (again), but relevant thanks to the show’s location at the EORA pool. Twisted into buns, each model had a brush of colour – pink, orange and coral – woven in on one side.
Beauty: Iridescent white glitter was dabbed under the eye, complementing a white eyeliner flick and super-sheeny skin.
Key piece: A double-breasted, slightly oversized suit cast in white glitter and finished with a pair of Karla Špetic customised Reebok kicks.
Overall feel: So fresh, so clean. Špetic is one of Australia’s most talented young designers and her show only reinforced that point. Although a Karla Špetic design is instantly recognisable – sheer paneling, boxy, outsized cuts sitting away from the body, a clean pastel palette – her real skill lies in her ability to constantly play with her signature so that every subsequent season feels fresh. This season’s high, half-turtleneck necklines and flirty thigh-split silhouettes were an on-point addition to her existing repertoire.


Click here to see our wrap-ups of Opening Night and Day 2, Day 3 and Day 4 of MBFWA.