Alice McCall wows, the student shows excite and Song For The Mute closes. Read our review of the last day of MBFWA. 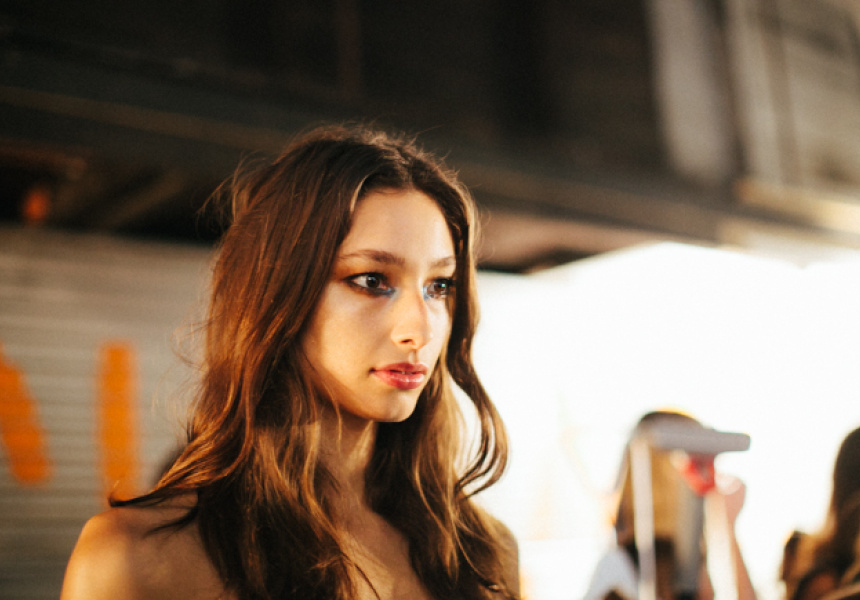 Song For The Mute

The last day of Mercedes-Benz Australian Fashion Week started and ended with a bang. Alice McCall made it rain confetti, and Song for the Mute called upon its friend and fan, Lupe Fiasco, for a cameo model appearance. It really doesn’t get more exciting than that. Here is our round up of the day’s highlights.

Alice McCall
Music: The show-stopping finale, complete with confetti canon, was set to Kermit the Frog’s Rainbow Connection.
Hair: Tousled and sexy, with a final spritz of glitter hairspray right before the catwalk.
Beauty: Glitter under the eyelids and a lot of highlighting on cheekbones and the T-zone.
Key look: The salmon-pink crop top and midi skirt, emblazoned with a cheeky lipstick print, worn in the front row by Nicole Warne of Gary Pepper Vintage.
Overall feel: All grown up. It’s the 10th anniversary of Alice McCall and it shows: the saccharine sweetness of old has been replaced by technical mastery, on-point tailoring and savvy collage prints. Against the backdrop of Alice Babidge’s remarkable set design – oddities and curiosities, painted white and suspended in the air – the result was nothing short of spectacular.

New Generation
Music: Each designer chose his/her own tunes – we loved the remix of Miley’s Wrecking Ball that opened the show.
Hair: Textured and very glossy.
Beauty: A bright fuschia lip.
Key look: Dyspnea’s glitter cage dress, adorned with fur pompoms.
Overall feel: Ready to wear. Each and every collection presented a remarkably wearable and current vision. Sheer was a major trend – with overlays and paneling appearing at Anna Quan, Daniel K and Rachel Alex – as was sports-luxe streetwear, which defined the collections by Doris Q, Caslazur and Aquintic.

The Innovators
Music: Again, everyone used their own music, we liked the party tone that was set by the opener: Brontosaurus by Tkay Maidza.
Hair: Slicked-back ponytails encased in a rubber tube.
Beauty: Super-smoky eyes – where have they been all week?
Key look: Hayley Dawson’s burgundy-leather pinafore dress with matching slides.
Overall feel: Experimental. The six chosen designers from the TAFE design course were all very different. There was Ciara Nolan’s ‘80s, trashy goodness, Logvin Code’s riff on fringing, Hayley Dawson’s leather separates, Bei Na Wei’s futuristic glamour, Kiaya Daniels’ modern menswear and Yousef Akbar’s graphic tailoring. What they had in common was a dedication to technical experimentation and their craft. Every collection was a meditation on how each designer could best realise their vision, using the skills they had learnt during their time at TAFE.

Song For The Mute
Music: Bass so amped up you could feel it through the seats, mixed by Danny Daze.
Hair: Wet look (one of the week’s most popular hair trends), with a lick of white paint through the centre part.
Beauty: Man-grooming at its finest.
Key look: A hooded, ribbed coat, with a cardigan tied around the waist, over slim-fit jeans. All in varying shades of gray and finished with white desert boots. So smooth.
Overall feel: Slick. There was a smoke machine. There was Lupe Fiasco. There was a front row that featured every single well-dressed Australian man, from Timomatic to the Stenmark twins. The slickness came from the show sponsorship and support from Harrolds, Sydney's luxury menswear boutique, and one of Song For The Mute's major stockists. But it also came from the clothes themselves. Song For The Mute is a local and international menswear success story, so it goes without saying that the clothes were truly cosmopolitan. In a style that can only be described as ‘structured sportswear’, the range featured a more tailored update on the brand’s signature drop-crotch track pants, puffy hooded jackets in crisp white and the introduction of blended virgin wool, alpaca and wax fibre used in coats and suiting for added structure. The design duo – Melvin Tanaya and Lyna Ty – received a nomination for the International Woolmark Prize barely one hour before the show. The prize clearly recognes the understated, yet significant role the duo play in the Australian fashion industry.

Click here to see our wrap-ups of Opening Night and Day 1, Day 2 and Day 3 at MBFWA