Catching up with TOME

Broadsheet favourite TOME held its first runway show at New York Fashion Week two weeks ago, so we thought it was time to see what the rising stars behind the label have been up to. 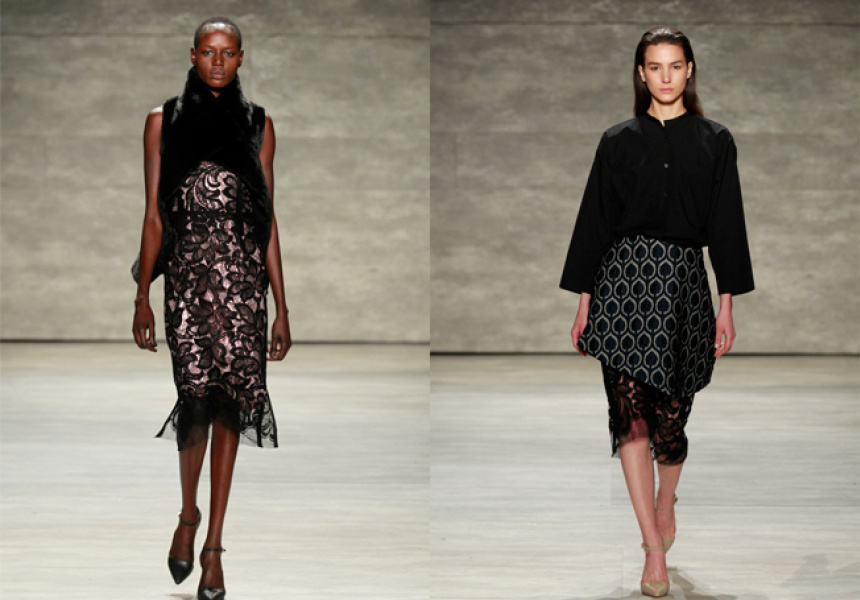 It’s been (another) big year for Ramon Martin and Ryan Lobo, the pair behind New York-based (but Sydney-bred) label TOME. They’ve staged their first runway show, been part of a television show, been nominated for a prestigious fashion prize, and met the industry’s top tastemaker, editor-in-chief of American Vogue, Anna Wintour.

“She is very sharp, to the point and insightful,” says Lobo. “She doesn’t mince words but is genuinely interested when engaging you.

The Wintour meeting was part of the process Martin and Lobo went through as nominees for the Vogue/CFDA Fashion Fund. While they didn’t take out the top honours, the experience was clearly a winning one for their label. For Lobo, the Fashion Fund process “created a new awareness, and elevated TOME in most people’s minds.” It also led the two in an unexpected direction – being TV stars. Currently screening in the US, The Fashion Fund follows all the designers nominated for the prize as they are put through their paces by judges such as Wintour, Diane Von Furstenburg and J. Crew’s Jenna Lyons.

The real achievement of TOME in the past year has been the gradual growth of the label, a feat Lobo and Martin have achieved without sacrificing the integrity of their original intentions. Two weeks ago, the two hit a major milestone – their first runway show, staged at the epicentre of New York Fashion Week, the Lincoln Centre.

Just a year after their first staged presentation, the leap to showing on a catwalk was one they had been waiting for. “It was the culmination of three years of pent up energy,” says Lobo. “We showed double the looks compared with our first presentation a year ago. [We] created our own accessories and showed knitwear for the first time.”

Once again, the designers took as their starting point a specific, inspiring woman – in this case, Shirin Neshat. An Iranian artist who now lives in New York, Lobo says it was her “sweet duplicity” that felt right for this Autumn 2014 collection. “Her work is so powerful, so political, so polemic and she is so subtle, so sweet, so warm and light hearted. We tried to evoke these [different] faces in the clothes.”

In practice this translated to fluid looks and a considered use of colour and fabrication. A layered silhouette dominated, pairing mid-thigh-length, sleeveless tunics, over knee-grazing skirts. The look was fluid, yet modern, with an emphasis on the oversized that is quickly becoming a TOME signature. The coats were a highlight – they enveloped the body without overwhelming the wearer. Building on last season’s plays with texture, there were looks both sleekly shimmering (the pink dresses are sure to be a success) and darkly embellished with lace.

As in seasons past, the designers built on ideas that have been present from the very first collection, while introducing new fabrics and silhouettes. For the two, this is the very point. “We are not so interested in ephemeral ideas,” says Lobo. “Some brands and designers thrive on a completely clean slate every season. We find it far more rewarding to build on what we have already established. It feels somehow more sincere, more thoughtful and more in keeping with our ideals of style versus trend, classic versus throw-away.”

It’s a truly modern idea, one that allows their customers to build a wardrobe season upon season, and is more reflective of the actual lives that women live. Clearly this approach is paying off – their previous spring collection is set to appear in the coming weeks at major retailers including Net-A-Porter, SAKS Fifth Avenue and Myer.