It has all the potions and creams you’d expect from the skincare brand, as well as an amphitheatre for performances and digital art exhibitions. 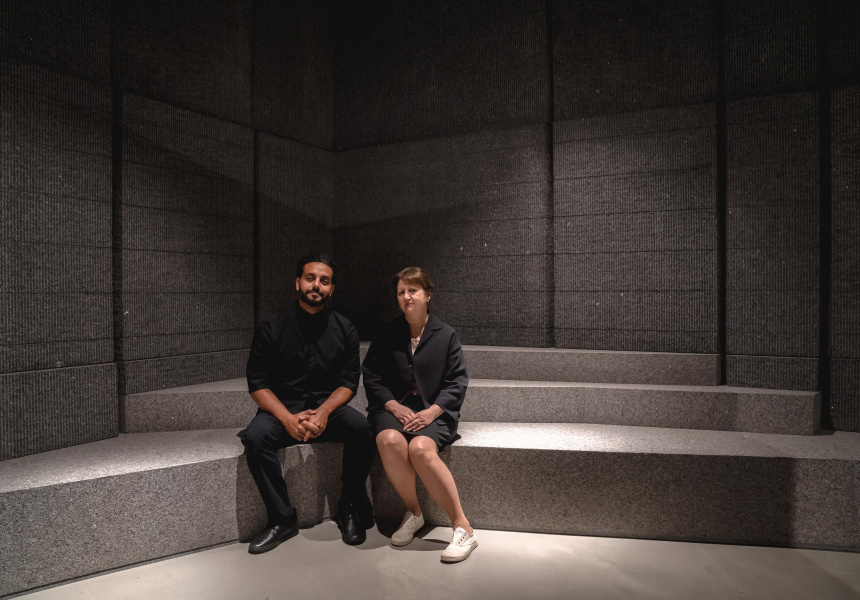 The rugged forms and epic scale of Christo and Jeanne-Claude’s 2.4-kilometre-long 1969 artwork Wrapped Coast are the inspiration for the new Aesop store on Pitt Street in Sydney, the brand’s largest in the world. It joins other nearby stores in The Strand Arcade, The Rocks and Paddington and replaces the existing store in Westfield Sydney.

Monumental granite slabs (mirroring the granite pavements that line the CBD’s streets) wrap the interior of the sandstone building in the Sydney CBD. Its softly lit and plant-filled interior brings a little coastal serenity to the bustling downtown environment.

Designed with international architecture firm Snøhetta (which designed Europe’s first underwater restaurant, the Shanghai Opera House and several Aesop stores around the world), the new store celebrates the skincare company’s evolution over the past three decades and will provide a blueprint for the next stage of the brand, which was founded in Melbourne in 1987.

“There was a desire to make a space that would have the spirit of all that is great about Aesop,” Snøhetta senior interior architect Peter Girgis tells Broadsheet. “The idea was to create a place that is memorable, and we wanted it to have an environment that is soothing, calm and transforming.”

Sanctuary amidst the chaos of lunch-hour shopping can be found in a series of private consulting areas. And an immense stainless-steel counter with basins for sampling products will calm the workers and tourists that frequent Pitt Street. The transformation aspect comes courtesy of an amphitheatre at the rear of the store, which will present a seasonal digital-art program curated by Guest Work Agency as well as providing a venue for performances and events.

It was the epic Wrapped Coast artwork of 1968 and ’69, commissioned by arts philanthropist John Kaldor, that inspired the space. Aesop and Snøhetta agreed on the wrapping of Little Bay’s cliffs, in Sydney’s south-east, in swathes of billowing fabric as a reference point.

“We were inspired by the elemental work connected to landscape, nature and natural materials, which are often referenced by Aesop, as well as the rugged grandeur of the project,” Aesop retail architectural manager Denise Neri tells Broadsheet.

But it was not until Girgis, who is based between Europe and the US, visited Sydney in March that he truly understood the emotional connection Australians have to the coast.

“When you come from somewhere so far away, the impact of the coastline is immediate,” he says. “I was up one morning at 6am at Bondi Beach watching the sunrise, and seeing all the people using the beach was a moment of understanding [of] how the water and the sand within the city is so important to people.”

With thousands of those locals and tourists walking through the CBD every day, the scale of the new store was born as much out of necessity as imagination.

“Every Aesop store is individually designed with a character determined by the location and the community, and with Pitt Street [being] one of the biggest retail precincts in Australia, we simply needed more room to deliver our experience to customers in a more comfortable way,” says Neri.

The star of that experience is of course Aesop’s skin, hair, and body-care unctions in their signature little brown bottles and vials. Since the company’s founder, Dennis Paphitis, opened its first hole-in-the-wall store in Melbourne’s St Kilda, Aesop’s range has expanded to include more than 90 products stocked in more than 220 signature stores across 23 countries.

“We are always driven by designing for the customer,” says Neri. “With both the products and the architectural locations we are always thinking about what the customer wants and needs. As they grow and evolve, we’ve grown and evolved with them.”