For the first time, shop its collection in its entirety, including its women’s and men’s collection and exclusive access to the label’s high-end Edit range each month before anywhere else. 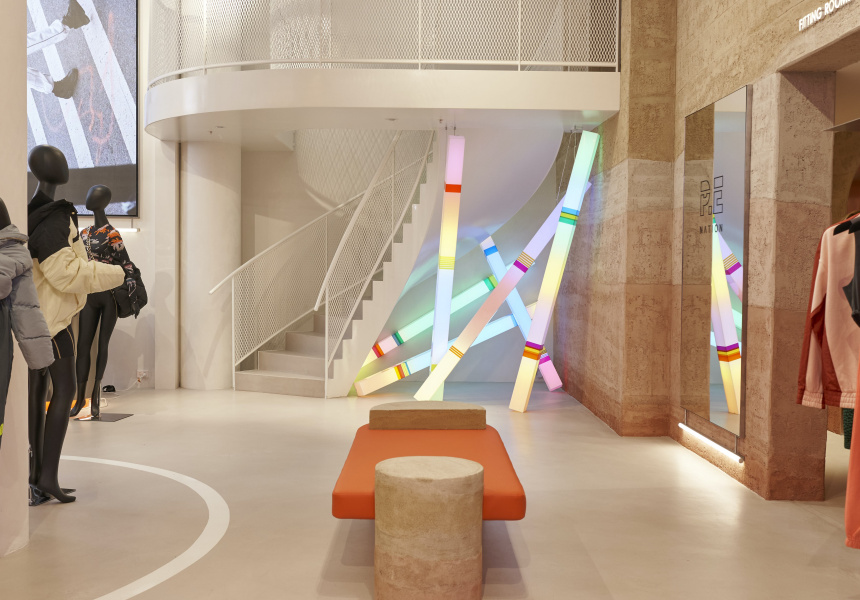 It’s been six years since Pip Edwards and Claire Tregoning first introduced their activewear label PE Nation to the world. The strategy of the Sydney-born label has so far relied on working closely with wholesalers and online retailers to help get the word out and sell its products. While the pair admits this approach has been extremely successful, it also has its limitations.

“With our expanding categories and growing collections, we wanted to show the whole collection in its entirety and we couldn't do that through our wholesalers,” Tregoning tells Broadsheet. “There are a lot of layers to the brand.”

To overcome this, PE Nation has opened its first standalone boutique store on Sydney’s George Street, in The Galeries. Designed by architect Kelvin Ho of Akin Atelier, the 200-square-metre, gallery-like space features light installations by Trish Campbell, artwork by Clementine Maconachie and bespoke furniture by Dowel Jones, and brings both the label’s women’s and men’s collection together for the first time.

The store will also hero PE Nation’s high-end Edit collection each month, ahead of its limited global release, alongside its seasonal lines. The space incorporates the brand’s urban-meets-coastal lifestyle identity with the use of sandstone, concrete and muted tones throughout.

“We also love colour – and a big part of our DNA is how we clash colour because it brings that joy and boldness to the brand, so we were able to bring that to [the space],” says Edwards, who earlier this year issued a public apology on Instagram after posting a story in support of changing the date of Australia Day, before posting photos of herself at an Australia Day party, with the Aboriginal flag flown upside down.

“We also love motion and movement, that’s why we have these big LED screens so that the space can be continually dynamic and it can keep evolving that way.”

Also, unlike other retail stores where clothing lines are categorised by product or colour, at PE Nation, it will be according to outfits. “We’re about the look, not a piece,” Edwards says.

The duo assures us that the opening of the Sydney flagship is only their first, hinting there are plans underway to expand the physical store footprint around the country and eventually internationally.

In the pipeline are also collaborations with global brands, Edwards adds. Most recently, PE Nation partnered with Virgin Australia to help the airline upgrade its cabin crew’s winter uniform with the addition of new sustainable puffer jackets and vests. The new uniform pieces are currently available only for staff flying on routes to Tasmania and marks the return of the Apple Isle’s official “off season”.