There are few restaurant experiences in Sydney quite like Icebergs Dining Room and Bar, where you can kick back with a plate of food, a glass of wine and a view of the ocean. But restaurateur Maurice Terzini is improving on that already spectacular experience by adding live music to the mix.

To celebrate the return to dining in NSW after a Covid-enforced lockdown, Icebergs is hosting a relaunch week packed with live music, with a different artist performing every night of the week – and a menu of the restaurant’s greatest hits.

It kicks off on August 1 with music promoter Steve Pavlovic, who brought Nirvana, Hole and the Beastie Boys to Australia in the early ’90s, and has since signed bands such as The Avalanches, The Presets and Cut Copy to his Modular label. He’ll be curating a playlist of songs for guests to dine along to.

On August 5, operatic couple Anna Dowsley and Jonathan Abernethy will bring some serious drama to the dining room as they perform pieces from French and Italian operas.

On August 6, singer Mahalia Barnes will drop in for a night of soul and blues, and the following night, Elliott Hammond and Michael “Monte” Tramonte from The Delta Riggs will play an unplugged set. Farmers from oyster collective East 33 will also be on hand, shucking bivalves for diners to taste-test.

On August 8, the week will finish on a high with a set from Sydney icons Sneaky Sound System, who’ll bring a taste of the sunset tunes of Mykonos and Ibiza to Bondi.

For the menu, Icebergs will be reviving its most popular dishes from the past two decades. The menu includes beef tartare; koshihikari risotto with blue swimmer crab; a choice of blue-eye trevalla or salt-crusted, boneless rib-eye; and pavlova for dessert (you can pay extra if you would like to add things such as truffle and caviar to your meal). You’ll also receive a drink on arrival.

And to help support NSW vineyards, which have faced a tough time thanks to the triple-whammy of drought, bushfires and Covid-19, Icebergs head sommelier Gabrielle Webster has put together a wine list representing NSW’s 14 wine regions. It’s available from August 1 until September 30.

This listing was updated on July 21 to reflect Kate Ceberano's inability to perform on August 6 due to coronavirus border restrictions. Her show will be rescheduled in the coming months. 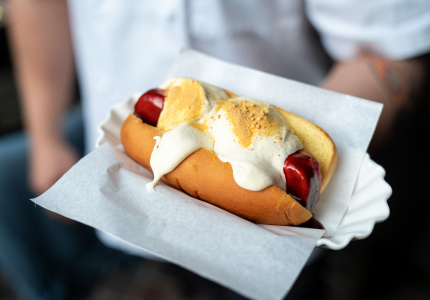 Bistro on a Bike