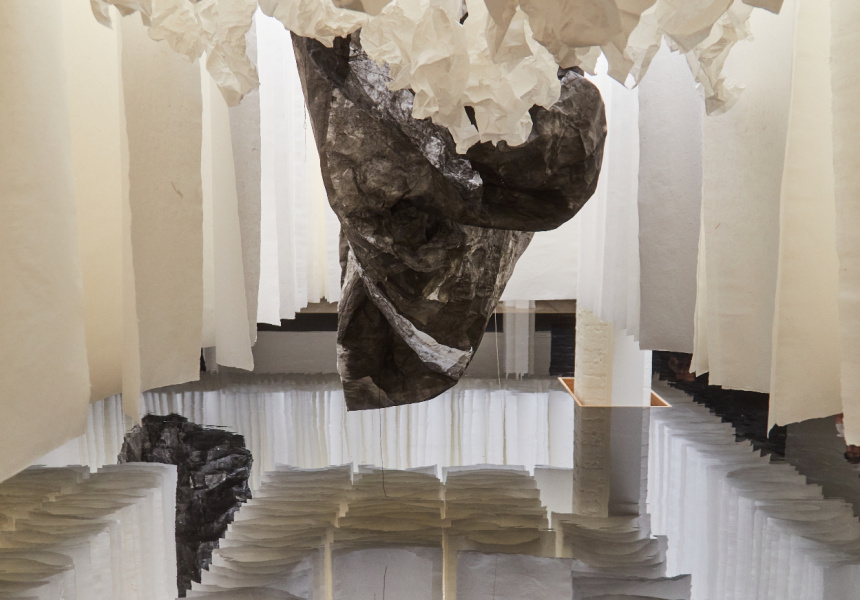 You could think of White Rabbit’s latest exhibition as a series of levels in a computer game. On the ground floor you use your thumbs to battle dragons and warriors while leaping over gaping chasms. On level one, there’s a maze of paper with a mirrored floor and every step you take has the power to disturb the peace. Level two sees you come face-to-face with a Dune sandworm-like beast, which twists and follows your movement. Then, when you reach the top, you’re left to contemplate your quest in the middle of dark, mountainous waves of water.

It’s quite the journey of imagination – and that’s precisely what curator David Williams is presenting in Big in China, a collection of works by 12 artists that captured the imagination of a nation of 1.4 billion people (and beyond).

You’ll recognise Pikachu smooshed against Mario in a curvaceous resin cast by Xu Zhen, an artist who has multiple works in the exhibition. There’s an intricate work by Fu Xiaotong, called Spiritual Mountain, made from punctured marks in paper. Lean in and you’ll see thousands of pinholes; lean back and you’ll see a mountain range that took the artist a year to create. Then there’s Lin Yan’s cloudscape of crumpled and ink-saturated paper, Sky 2. It’s fragile yet domineering and you can walk around it, peep under it, or venture into a pathway through it.

When you’ve completed all four levels of the gallery, return to the ground floor to see how far you can get in Feng Mengbo’s multi-level video game Long March – Restart. Two imposing screens face each other in a corridor of familiar gaming sounds and moves. It’s a little bit Street Fighter, a little bit Sonic the Hedgehog, and a little bit of a crash course in the Red Army’s 1930s retreat.