Anangu Pitjantjatjara Yankunytjatjara (APY) artist Vincent Namatjira has won this year’s $100,000 Archibald Prize for his portrait of ex-AFL player and community leader Adam Goodes, titled Stand strong for who you are. The painting depicts Namatjira in the foreground alongside Goodes, who also appears in the background in three iconic poses – including his 2015 “war dance”, which sparked racist abuse and a public discourse.

Namatjira first met Goodes when Goodes visited Indulkana as part of his work promoting Indigenous literacy. The artist reached out to him after watching Ian Darling’s 2019 documentary The Final Quarter, which explores the final three years of Goodes’s playing career, when he took a stand against racism.

Vincent is the great-grandson of acclaimed landscape painter Albert Namatjira and the win marks his fourth time as an Archibald Prize finalist. Last year he was awarded the $100,000 Ramsay Art Prize for his irreverent, double-sided interrogation of colonisation. Close Contact featured Captain Cook on one side and Namatjira on the other side giving a thumbs up.

The Archibald Prize (now in its 99th year) and the Wynne Prize for landscape painting or figure sculpture (established in 1897) are judged by the AGNSW’s 11 trustees, two of whom are artists.

This is the fifth year in a row an Indigenous artist has been awarded the Wynne Prize.

The $40,000 Sulman Prize for subject painting, genre painting or mural project was selected by guest artist Khadim Ali from 18 finalists and awarded to western Sydney artist Marikit Santiago for her work The divine, which depicts her three young children (the work also includes markings from all three).

And on December 16, it was announced that Angus McDonald's portrait of Kurdish-Iranian writer, poet, filmmaker and journalist Behrouz Boochani – who was held on Manus Island for six years by the Australian Government – had won the People's Choice award.

The exhibition opens to the public on September 26 and runs until January 10 at the Art Gallery of NSW before travelling to regional galleries. Bookings required. 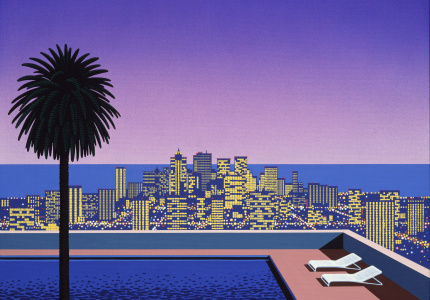 Streeton at Art Gallery of NSW