A new podcast for women, by women, about women. What do motherhood, Donald Trump, poetry and Ru Paul’s Drag Race have in common? They’re all topics of discussion on Sisteria – a new podcast giving voice to the shared experiences of women.

Each episode unpacks the experience of being a creator and consumer of art and culture – and of being a woman trying to make it work.

The hosts Stephanie Van Schilt (author and former editor at The Lifted Brow) and Veronica Sullivan (writer, editor and Prize Manager for the Stella Prize), and producer Izzy Roberts-Orr (also a writer and editor) have “known each other professionally and personally for years”, says Van Schilt. She worked closely with Roberts-Orr on podcast The Rereaders, a fortnightly literary and culture podcast. Van Schilt was a co-host, Roberts-Orr the producer and Sullivan was a guest on the show.

Van Schilt says they are all “friends who love spending time together and talking about pop culture, feminism and creative women, so we wanted to take those conversations we’d usually be having via text message or at the pub and bring them onto the podcast.”

With support from Creative Victoria and the Melbourne Library Service, Sisteria became a reality.

The self-confessed “massive podcast nerds” are using the medium to take the “huge appetite for feminist conversation and events” to audiences outside major cities, says Van Schilt.

“The more access people have to women’s stories and voices the better, and the accessibility of the medium for people in regional and rural areas is crucial.”

The season has six episodes. So far Van Schilt and Sullivan have talked literary journals, creative anxiety and self-doubt with best-selling author Hannah Kent (Burial Rites). In the second episode, freelance writer and feminist Amy Gray joins the conversation, speaking about political action, naked selfies and being a mother.

The third episode features broadcaster and poet Alicia Sometimes and a discussion on the new AFLW league among “three feminist footy fans who have often felt politically conflicted about our love of AFL”, Van Schilt says.

“Choosing the guests is the hardest part, because there are so many amazing women artists, writers and creators doing amazing work, and we want to speak to them all,” Van Schilt says. The six guests chosen for the first season are “as diverse and wide-ranging as possible,” she says.

“Part of the joy of a podcast is getting across larger political issues and ideas in an accessible, conversational way.” Each episode is a mix of free-wheeling conversation and four regular segments – ranging from cultural criticism to advice. “Often the conversation, like any interesting conversation, ends up zigzagging all over the place and covering a gamut of various topics.” 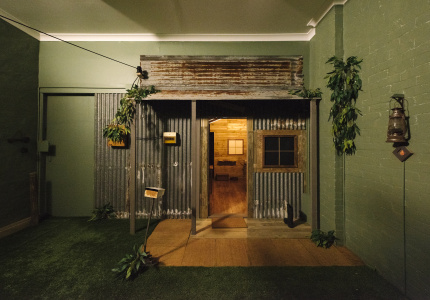