Where To: Sophie Lowe's Inner-City

The actor and singer plays it cool in summer with shady gardens, ice-cold gelato and an escape to an air-conditioned cinema. 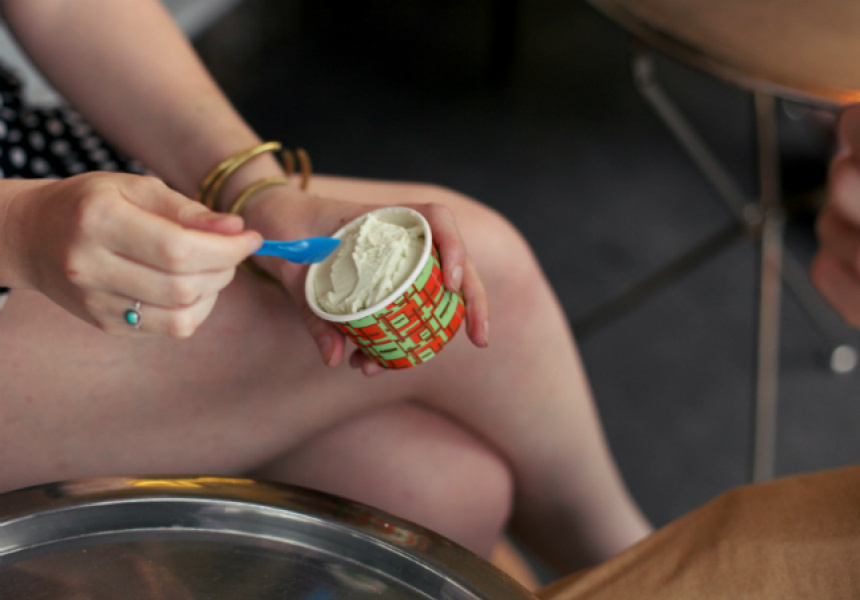 You’ll know Sophie Lowe as the complex, compelling Kitty in ABC’s The Beautiful Lie – its final episode aired on Sunday – or perhaps from Beautiful Kate, The Slap and the US version of The Returned. But before Lowe was honing her acting skills, she was a singer. And now with the release of EP2 (produced with Neal Sutherland of Jack Ladder and the Dreamlanders), her dreamy electro pop is having its moment in the sun, too.

Lowe has lived in Sydney since she was 10, when she moved here with her family from Yorkshire, England. One of her first Australian memories is of being stung on the stomach by a bluebottle at Balmoral and vowing never to wear a bikini again. And while Lowe, to this day, is not much of a beach person – the sun makes her happy, but she’s fair-skinned and would rather not sunbathe – she does love Sydney. “No matter where I go in the world, and I’ve been to some pretty cool places, I always can’t wait to come back home,” she says. “I don’t think there’s any other place like it.”

When she’s not at home in Camperdown playing her new PlayStation 4 or chilling in friends’ backyards, this is where she’ll be hanging out this summer.

The Royal Botanic Garden
Mrs Macquaries Road, Sydney
sydney.com/royal-botanic-gardens-and-the-domain
“I always come here with friends. Sometimes we’ll have a picnic or we’ll just be walking around the city and think ‘screw this, let’s go sit in the garden’. And then we just chat and giggle and sometimes bring in drinks … but you’re not meant to do that! It’s such a beautiful garden – it’s really relaxing and there’s always a place to sit even though there are so many people here.

It’s weird, I don’t really go to the beach or the ocean that much, but whenever I’m away all I want to do is come home and be by the water, and I usually want to come here. I love seeing the harbour and the bridge, everything’s here.

Sometimes I go to the St. George Open Air Cinema, which is nice, and I saw an opera there once too – that was really cool.”

The Grounds of Alexandria
“My parents took me here for my birthday when I got back from shooting The Beautiful Lie. I have a really nice memory of it because they surprised me and they had booked a table – even though I didn’t think you could book!

It always reminds me of summer because of all the flowers and everyone seeming so happy. But there’s that petting zoo there as well, and the food there is really good. I usually have the breakfast burger.”

Artificer Specialty Coffee Bar & Roastery
“I always visit Artificer when I stay at my boyfriend’s house. Because I don’t think it’s that well known, it’s never packed. But the coffee is good. I’m starting to get into filter coffee, too, and they do really good ones. Otherwise it’s a skim flat white. I usually have a large, but I’m trying to cut down because it’s not good for your throat to have too much dairy. The design is nice – really clean lines. I wish it were my house!”

Dendy Newtown
261–263 King Street, Newtown
dendy.com.au/Page/Dendy-Newtown-Location
“I live really close to the Dendy, so I can just walk up. I like Newtown as well, it’s a cool vibe and I love movies obviously! They always have the best films playing there. I Recently saw The Lobster there – it’s probably one of my favourite films of the year. I can’t explain it – it’s so weird and so funny and makes you feel so much even though no one says that much. It’s really cool.

Also, when it’s too hot, sometimes I just go to the movies because I can’t deal with the heat. And sometimes I go because really I just want an ice cream – you have to eat stuff in the cinema!”

Gelato Messina
“I love it – it’s the best ice cream in the world and great in summer. I go to the one in Surry Hills and usually have the pandan coconut and dark chocolate sorbets. But they don’t taste like sorbets because they’re kind of creamy.

Where To is a series in which locals we admire show us their favourite spots in Sydney. See our interview with actor Anna Bamford here, and Campbelltown Arts Centre's Michael Dagostino here.