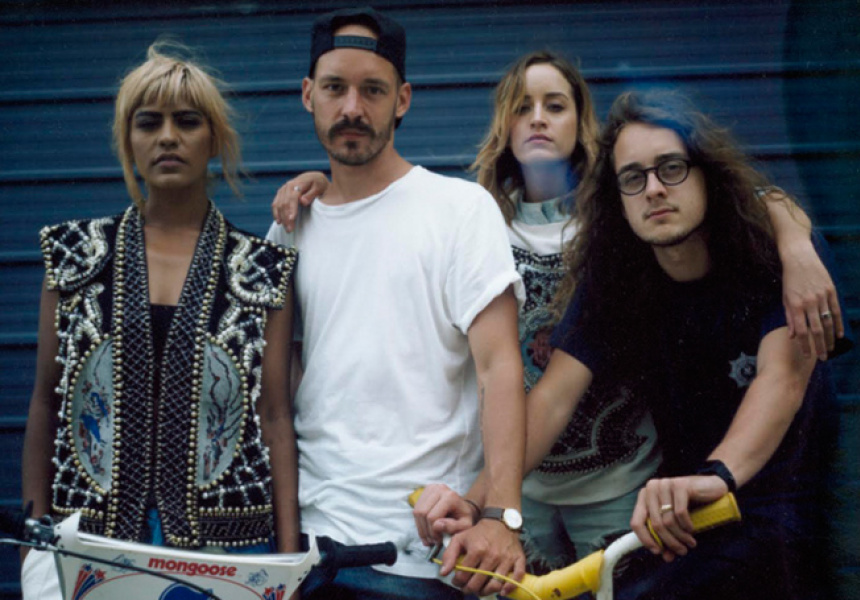 Pop music can be unimaginative drivel. It can also be infectiously catchy and make you feel buoyant. Tigertown makes the latter – it’s funk-infused jangly pop. The foursome is from Sydney; a family unit. Husband-wife duo Chris and Charlie Collins are on guitar and lead vocals respectively. Chris’s brother and sister, Alexi and Elodie Collins, play keys and bass. You’d think it would be a Collins-overload (and not of the Sussudio kind), but Alexi says it makes touring life easier.

“I think the good thing about all being family is that we can share small spaces without complaining too much,” Alexi says, via phone from Los Angeles. “I mean, we’re used to living together. At the moment we’re in an Airbnb … and there’s only one person sleeping on the couch. That’s good for us.”

When we speak to Alexi, Tigertown is wrapping up a North American tour. It’s been a monumental 12 months for the band. Tigertown was headhunted at last year’s SXSW Music Festival in Austin and was signed by Inertia Music, Neon Gold and Atlantic Records. Since then, it’s been constantly writing, recording as well as supporting St Lucia around North America.

“The interesting thing about American crowds is that they vary so much from city to city,” Alexi says. “Playing in New York, compared to playing a show in Columbus, Ohio, is a completely different experience. They’re both cool in their own ways.” Throughout the tour, Tigertown has played to sold-out venues in Brooklyn, Detroit and Toronto.

“I really like Columbus,” Alexi says. “The crowds are probably some of the friendliest. I think it’s a middle-American thing; they’re very encouraging. As soon as it’s said that we’re from Sydney, Australia, they give us a big welcoming scream.”

Tigertown returns to Australia in April. It will be the band’s first opportunity to play music from its debut EP, Lonely Cities, on home turf.

“I know a lot of our friends and family are ‘gonna be there,” Alexi says. “I think our music probably sounds a bit different from when they last saw us. We got excited about writing music that makes us dance, because that brings us happiness. I think that was our goal: to write music that makes you happy.”

“[English] is one of those guys who’s just constantly got good ideas. He’s pulling them out left, right and centre. He’s got a great set-up there, with a few vintage synthesisers and a piano … He’s an amazing guitarist and he has an amazing dog named Blueberry. When we were feeling uninspired, Blueberry would come and walk around the studio for a while and then we’d get back to it.”

Blueberry aside, there are other influences that punctuate Lonely Cities. The five tracks hark back to classic pop of the ’70s. From all accounts, Michael Jackson is Tigertown’s unofficial spirit guide. Collins cites P.Y.T (Pretty Young Thing) as one of his favourite tracks of all time. This proud fandom is an intrinsic part of Tigertown’s identity.

“My brother Chris and I both have Michael Jackson tattoos on our arms,” Collins says. “Matching ones, because we’re super cute. It’s actually the production logo … Sort of an abstract drawing of his legs and his feet on tippy toes.

“We’ve always had that Michael Jackson influence, and I think this newer sound is definitely leaning more towards that because [it’s] the music that makes us dance.”

Lonely Cities is out now on iTunes and all good streaming services. Tigertown will be playing Newtown Social Club on Friday April 1, and Northcote Social Club on Saturday April 2. Tickets available here.