Immersive feasts, an ATM dispensing cupcakes and a pulsating forest. 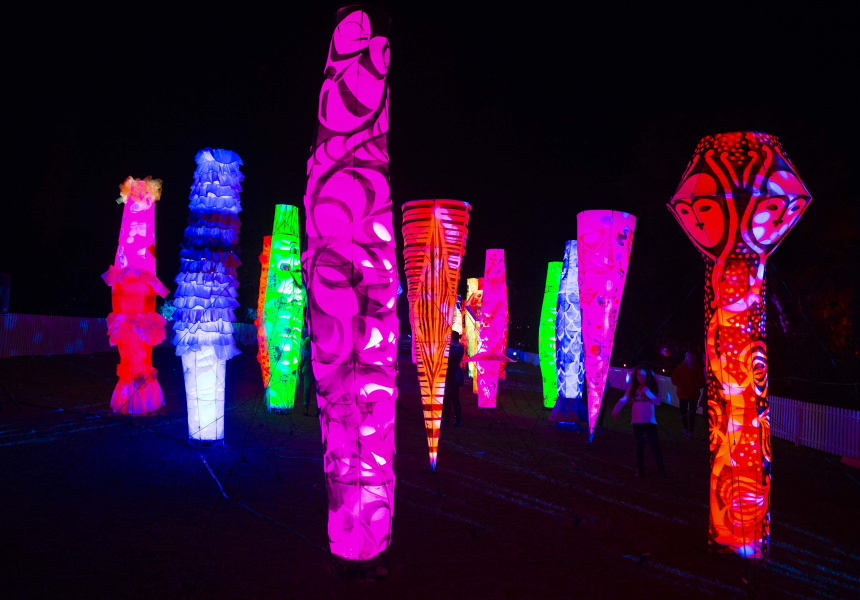 The Royal Botanic Garden’s Vivid display is part of the two-kilometre Vivid Light Walk that takes in The Rocks, Circular Quay and the Opera House.

The garden component starts at the Queen Elizabeth II (QEII) gates with Midnight Moon, giant, shimmering, glowing discs you can walk beneath. You’ll then enter the Nautilus Forest filled with spiralling trees that pulse and ripple with colour, and then encounter The Bloom, a huge metallic flower with petals covered in mirrors. After that you can ride the He’e nalu, a wave tunnel that appears to open up before you.

A cheerful flock of birds will be throwing a Parrot Party, which has been inspired by the New Zealand kea parrot and the Australian rainbow lorikeet. Finish with a meander along the pathway of light, or Aqueous.

There’s also an ATM dispensing cupcakes and two immersive feasts being hosted in The Calyx.

The curator of Light for Vivid Sydney, Anthony Bastic, describes it well: “Exotic, beautiful, intriguing and downright strange works of lights will take visitors on an interactive adventure through a fantasy world as the garden bursts into life with brilliant colour and incredible creations and creatures, from a majestic midnight sun to a busily building bowerbird.”

Vivid Sydney at the Royal Botanic Garden runs from 6pm to 11pm every night from May 25 to June 16. Enter via the QEII Gates, adjacent to the forecourt of the Sydney Opera House.