Ross Goodwin uses machines to create language-based art. He’s coming to Sydney for Vivid to talk about the marriage of the two. 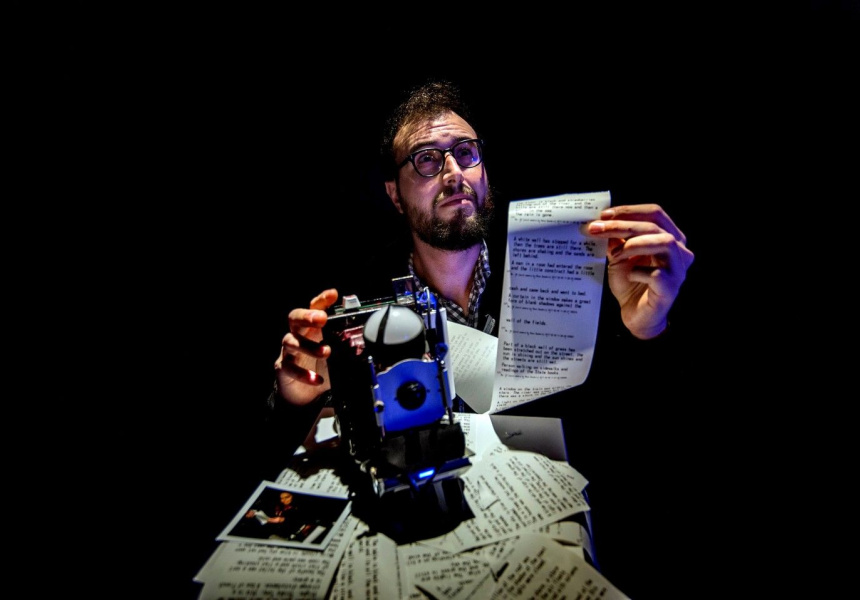 I’ll never forget the time autocorrect failed completely to save me from myself when I signed off an email to my editor with “kind retards”. On countless other occasions it has “corrected” me to sound like a maniac. And I reckon most of the time Siri deliberately misunderstands me.

The hit-and-miss nature of everyday artificial intelligence (AI) can be frustrating and hilarious. But Ross Goodwin, an AI artist, independent researcher and “gonzo data scientist”, sees its creative potential. He believes the technology’s glitchy imperfections can create thought-provoking art and “augment human writing”.

“I think of myself as an expert in generative text and natural-language processing,” says Goodwin. (“Natural language” is spoken or written language, as opposed to computer code). He uses computers to analyse text and to create language-based art.

Goodwin is appearing for Vivid as part of a panel called Human & Machine: The Next Great Creative Partnership. It will explore the idea that the next cutting-edge of AI will be helping humans in creative pursuits.

AI is the theory and development of computer systems that can perform tasks that require human intelligence (visual perception, speech recognition, decision-making). AI machines learn as they go, reason and interpret the world around them. They do this based on data (information) input by humans.

An example is Goodwin’s Word Camera. It has been “trained” on millions of images captioned by humans and has come to its own understanding of language. It can recognise objects in an image and describe them. The results are abstract and poetic. “It uses technology to make expressive narratives of images. I want it to conjure imagery in its own right,” says Goodwin.

This led to Sunspring, a short film (directed by Oscar Sharp) made from a computer-generated screenplay trained on 170 human-written science-fiction movie and TV series screenplays (including Star Trek, Futurama and The X-Files ). Goodwin built what’s called a Long Short Term Memory neural network (LSTM). It creates language at the character level. “It’s a lot like auto-complete … when you’re writing on your phone and it suggests the next word for you, but a lot smarter,” says Goodwin. And it’s not suggesting the next word, it’s suggesting the next letter, or space or punctuation, over and over again. “Just like a human writing letter by letter,” he says. The machine named itself Benjamin.

The film involves three protagonists – possibly involved in a love triangle – wearing shiny clothes (futuristic!), spitting out eyeballs and using iPad-like gadgets with green-laser face scanners. Examples of dialogue include “Well! I have to go to the skull!”; “He looks at me, and throws me out of his eyes”; and “The way you were sent to me … that was a big honest idea.” It’s fever-dream-esque, intense and would be mostly nonsensical without the expression of the actors. It’s also surprisingly emotional, considering it was written by a machine.

“Now, when the technology is new and fun and we’re getting interesting results just from playing with it,” says Goodwin. “People are seeing what the machine can do and how that can be valuable, but I know it’s not perfect yet.”

The imperfections are part of the point. For Goodwin, the best examples of human creativity make you think.

There have been some embarrassing examples of AI gone wrong; the result of training the algorithms on data that reflects cultural biases. In 2015 Google’s photo-recognition algorithm recognised black people as gorillas. And last year Microsoft’s Tay “chatbot” (described as a tool for "conversational understanding" – the more people use it the better it becomes at chatty banter) was quickly hacked to become racist and misogynistic. “AI is like a mirror, it reflects who we are as a society, not as individuals, and we need to be careful about that,” says Goodwin.

So will Kitt from Night Rider and R2D2 put artists, writers and other creatives out of work?

Goodwin believes that as far as creativity goes, human decision-making will always be crucial. "It’s going to open up new opportunities for creativity in the future,” he says.

“To think of technology as an ‘other’ that’s out to get us is not only misguided, it’s incorrect, because humans have always integrated themselves with technology,” says Goodwin. He compares the AI he is using to the invention of the camera. “Before it, creating a photo-realistic image used to take innate talent combined with years of training. Now the camera democratises that and allows anybody to create a photo-realistic image. The camera didn’t make painting extinct.”