Something for Kate's Twenty Something

We sat down with Something for Kate frontman Paul Dempsey to get his thoughts on the band's 20 years, looking back, and fumbling forward. 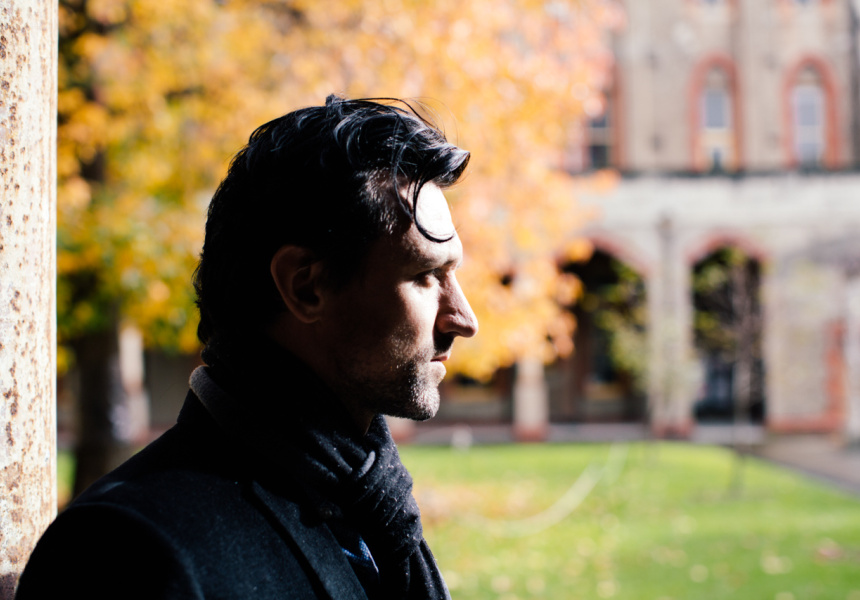 Six albums, 24 singles, 16 ARIA nominations and half-a-million records sold to date; Something For Kate has some impressive numbers to its name. This year, the trio – Paul Dempsey, Stephanie Ashworth and Clint Hyndman – will add one more figure. The band will be celebrating 20 years in the biz. The grandiose national tour planned for July is nearly sold out, but it's just one piece of the puzzle. The anniversary will also be marked by a book (Paper Trail), a short film, and the re-issue of the entire SFK back-catalogue on vinyl, CD and digitally. We caught up with lead singer Paul Dempsey.

How are you feeling about the 20-year thing?

It doesn't feel arbitrary; it's definitely a milestone. We didn't want to let it just go by without marking the occasion. But it's just kind of like, “Oh, shit, we've been around that long?” It's not like a big line in the sand or anything. We'll probably be around for another 20 years. We've always just kept looking ahead and pushing forward and doing our thing. We're not overly sentimental about it, but we love touring, we love playing shows.

We just thought this is a great opportunity to do another tour, but make it special, make it different. We're not going to have a support band, we're going to show a film before playing two sets with an intermission. It's a chance to do something different and feel the love a bit with the people who've kept us going for 20 years, and try to treat them to something a bit more than the usual.

Tell us about the pre-show film.

It's not finished yet. It's being put together by a guy called Callum Preston, who also put together the book. The book is like a scrapbook; it's just a lot of images and a lot of material from the past 20 years. We had this storage unit for 20 years that we just keep throwing stuff in. You pick up all these T-shirts and posters and articles and artefacts. They all got thrown in boxes and put in this storage unit we just never expected to look at.

So we emptied out all these boxes of stuff and Callum came and photographed it all. Similarly, the film is a sort of motion-picture scrapbook. Sort of just moments in time. It's not chronological so much. You just get a sense of all the stuff that's happened with us. We've never really been into the completely linear, serve-everything-up-on-a-platter sort of thing. We've always made things patchy and obscure.

Because it's like a cloak or a mask, I think. We've always tried to just leave it halfway so our listeners can step forward and meet us in the middle. We like to leave room for people to bring their own interpretation, instead of just laying everything out and being too clear. It ends up being boring.

How would you describe the band's progress over the past 20 years?

I would describe it as fumbling forward. You only learn by trial and error, and just working out what not to do; what didn't work. It's more an experimental process. We've always just done what felt right at the time. And then the next time, we've been able to look back at that and go, “Well, actually, it may have felt right then, but it doesn't feel right now.” There's no grand design – I wish we were that smart.

Looking back, how does that process make you feel about the music you were originally signed with?

We were young and we were over-excited kids just making a racket. I was screaming my guts out and writing whatever dumb words I could fit to the music. But that's all we knew. Like I said, you do what you know at the time. You always look back and go, “Well, I know better now.” But you didn't know then, so you can't change it. There's no point giving yourself a hard time.

I wish Leave Your Soul to Science was our first album, but you have to learn your way there. We were really young, so our whole evolution has happened in public. No one's going to let us forget about our earlier stuff. You just have to accept it and keep going. A lot of people still judge us on 10- or 15-year-old stuff. You wish they wouldn't, but what are you going to do about it?

A lot of your albums have been recorded overseas. Why is that?

I think you just do better stuff, are more creative and a bit more free when you're not surrounded by your buddies or your family, or going home to sleep in your own bed and to feed your cat. I think if you can escape familiar things, then that's good for any kind of creative process. It works for us, anyway.

Is it purely a distraction thing? You don't have to worry that a friend might call you and want to catch up?

Yeah, or drop by the studio and get drunk, and encourage you to get drunk with them. It's just better. We did our second album in Melbourne, and we just decided then that we wouldn't do it again for exactly that reason. The studio just became everyone's designated party spot. It's just annoying when you're trying to focus.

It's funny, people have this perception that artists get up and spend half the day in their pyjamas, doing a bit of this and a bit of that, and after six months they have something. But lots of successful musicians, painters, whatever, say, “I made an effort to get free of distractions and work consistently hard.” Do you think that's been key to your success?

Yeah. There's this idea that if you treat art like a nine-to-five job and get up and go to the same rehearsal space every weekday, that's somehow wrong because it's not free and easy and creative and flowing, maaan. I think that's bullshit. You're not forcing anything. All you're doing is putting yourself in a space on a regular basis, so if an idea comes, you're not out shopping. You've got to make yourself available.

Still, that information is nice ray of hope for aspiring musicians who are frustrated with the quality of their work.

I've been asked if I consider myself prolific. My answer is “Yeah, I'm really prolific, and 99 per cent of it is unlistenable shit.” But that's how you have to be. You can't expect to come up with great stuff the first time. We throw away hours of music and thousands of words before we finish something. That's not supposed to be a heroic statement. That's just how it is.

How do the three of you come to a consensus on what to throw away? Do you have times when one person likes something, but the others don't?

Yep, definitely. And it's usually me, because I'm usually the one who writes it. Basically the best way to describe this band is, I'm the songwriter, and Clint and Steph are the producers. I bring everything in, and they tell me what they think is good, what they think is shit. They suggest re-arrangements and re-structures, or they'll say, “It just needs something different here”, and they'll tell me to write a different part. Which drives me nuts. I get crazy about when I'm ready to share something with them. So when I do finally show it to them, I'm on tenterhooks. And when they tell me what they think, I get like, “No, you're wrong!” and we fight, and then I realise they're right. So I write something different and we get there eventually. Very rarely I come in and they go, “Yeah, this is great.”

What's motivated the three of you to keep going all this time?

There's bits you like more than other bits. But there's absolutely not one element of it that I would complain about. My dreams have come true. I would be doing this with all of my free time if I didn't get to do it for a living. The three of us feel kind of stupidly lucky. We're best friends and family, and we just love making music.

Something For Kate will play the Enmore Theatre on Saturday July 12. Purchase at somethingforkate.com.