One of history’s most powerful women is humanised with the help of a couple furry friends. Lady Darci, Tinkerbelle and Dame Zahli, plus entourage of one.

Photography: Courtesy of The Charming Ladies
1/11 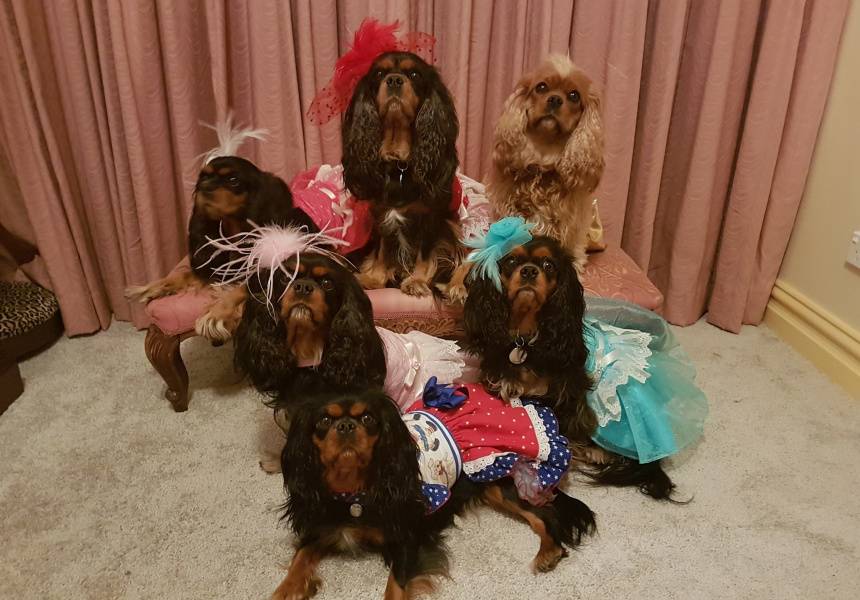 Photography: Courtesy of The Charming Ladies
1/11
by Jane Albert
Share

Lee Lewis has directed a myriad of A-list actors in her time, Marta Dusseldorp and Miranda Tapsell among them, but this is the first time she’s been called on to direct a dog.

Lewis has been holed up in the Sydney Theatre Company’s rehearsal room working with a cast of 10 on the epic historical drama Mary Stuart, with a powerhouse female cast, yet all anyone wants to talk about is the dog.

“It’s a huge play wrapped around a dog, that’s what I’m learning,” the director chuckles.

The relationship between of two of history’s most influential and ultimately conflicted women, cousins and rivals Elizabeth I of England and Mary Queen of Scots, seems to be in the zeitgeist. The recent film Mary Queen of Scots, starring Saoirse Ronan and Margot Robbie, has attracted a lot of Oscar hype.

The STC production has been adapted by award-winning playwright and actor Kate Mulvany (who also adapted The Harp in the South) from Friedrich Schiller’s original script. Mary Stuart covers the pivotal final days between the pair in the lead-up to Mary’s execution, and having such a compelling woman playwright adapt the script adds a new dimension to this tale, which has traditionally been told and directed by men.

“It feels like a big historical drama, but because Kate’s a young female writing the story everything we’re seeing on stage is very different. And rehearsing with two strong female leads Caroline Brazier [Mary] and Helen Thomson [Elizabeth] has been interesting, because it’s a very different dynamic to most historical plays where two women on stage are likely to be a servant and a wife,” Lewis says.

And then there’s the dogs. This is the first experience of live theatre for Lady Darci and her owner Nicole Celeban, who responded to an ad posted through an animal extras talent agency.

“They were looking for a dog who was calm and collected and happy to mingle with the actors and just be a sweetie and I think they nailed it,” says Celeban.

While Lewis admits she initially considered cutting the dog from the script in the perennial drive to save money, the pooch is in fact crucial to the play’s success.

“Dogs humanise characters; we like people with dogs,” she says, pointing out the audience needs a reason to empathise with Mary.

The dogs are only on stage for a total of about 15 minutes, but their impact on the audience at the preview shows was clear. Celeban stays in the wings during the performance, but says when Lady Darci first walked on stage and climbed into Brazier’s arms there was an audible gasp from the audience. And towards the end of the play, when Brazier has to farewell her dog before facing the executioner, there wasn’t a dry eye in the house.

Celeban says training the dogs has been relatively simple – only Brazier and Wilson were allowed to give them treats (of their favourite barbeque chicken). It helped that Brazier is a dog lover and in fact auditioned her own hound (who Lewis describes as “an Australian mutt”) who ultimately didn’t make the cut.

“The dog auditions were hysterical, and turning down the dogs was heartbreaking; it’s way harder than saying no to actors,” she says.

Lewis has built in contingency plans should the canines suddenly wander off or miss their cue. “I have variations depending on what the dogs do because I’m not using show dogs. A bit like working with really young children, I’ve learnt you can’t ask too much of them, you have to build a bit around their unpredictability.”

Although the dogs aren’t professionals, they all work with Nepean Therapy Dogs, a longstanding charity that trains dogs to visit hospitals, nursing homes and schools. Tinkerbelle’s owner Paula Smith is a trainer with the organisation, and her experience has been invaluable for Mary Stuart.

While Celeban says the fees earned by the dogs won’t exactly pay off her mortgage, it’s been a very rewarding experience.

“I don’t think I’ll be retiring on what we earn, but it’s something we’re just adoring doing and I’m enjoying being a stage mum. I’m blown away by what she’s [capable of]. Would I do it again? In a heartbeat.”

Mary Stuart is playing at the Roslyn Packer Theatre until March 2.