This tiny theatre in Sydney’s inner east is punching above its weight. Full cast and creative team for Only Heaven Knows 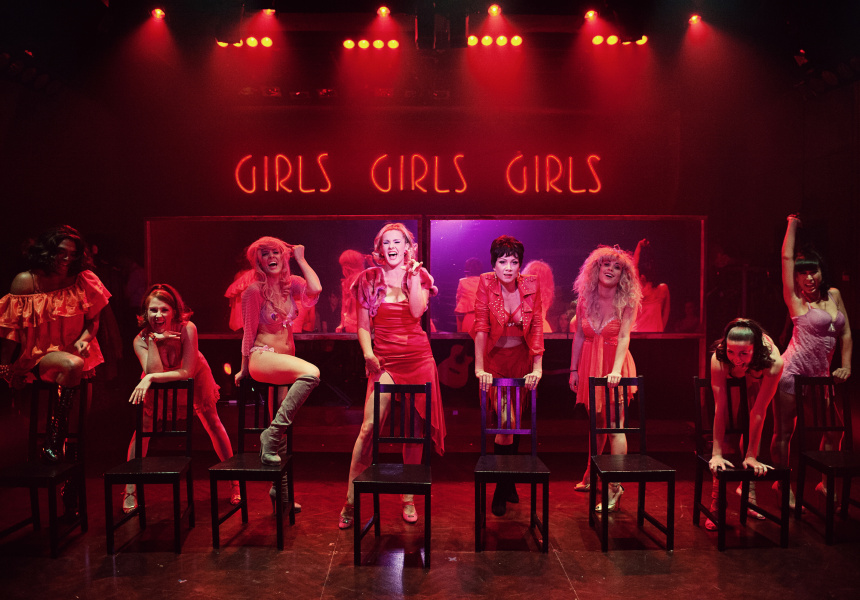 Sweet Charity at The Hayes Theatre

It may only have 115 seats, but this intimate venue often births new shows that regularly move on to the Sydney Opera House and interstate.

Named The Hayes Theatre – in honour of Australian musical theatre legend Nancye Hayes – it’s a not-for-profit that opened in 2014 with a production of Sweet Charity starring Helpmann Award-winning singer Verity Hunt-Ballard (Mary Poppins), and directed by Dean Bryant. It sold out and transferred to the Sydney Opera House.

Since then the company hasn’t looked back – built from a need for a small-scale space for musical theatre without the financial demands of established local companies such as the Sydney Theatre Company, Belvoir and Griffin Theatre (who don’t traditionally program musicals).

While New York and London have dedicated small theatres off-Broadway and off-West End, Sydney had none.

Producer Lisa Campbell and her husband, performer David Campbell, are founding directors of Hayes and Luckiest Productions, which produced Sweet Charity and successful productions of Little Shop of Horrors and Nick Enright’s Miracle City. She says they’ve been gratified by the response over the past three years.

“In all honesty it exceeded our expectations from the outset and we’ve been playing catch-up ever since,” Lisa says. “We had targets for our first year and our first show alone exceeded all of them.”

The hits continued: Rent, Calamity Jane and High Society all sold out while Heathers and Cabaret went on to tour interstate.

“We felt it was vitally important to give an opportunity to local creatives. A lot of the big shows that come over arrive with their own creative teams and although that can be hugely rewarding for actors there are less opportunities for creatives locally,” says Lisa.

Such is the reputation of the Hayes that award-winning performer Hayden Tee interrupted his West End season starring in Les Miserables to return for upcoming show Only Heaven Knows.

The New Zealand-born Australian performer says he didn’t think twice about accepting a role in the show.

“When The Hayes offers you something you say yes,” Tee says. “It’s an amazing theatre and there’s a real aura around performing here – and so there should be.”

Tee says the intimacy of the space (a far cry from the 2000-plus audiences he’s used to) provides the toughest of acting classes. “As an actor you want to challenge yourself and this theatre is so intimate you can’t lie. You have to be authentic, so it’s a way of honing your craft and challenging yourself.”

Equally as important to Tee was the nature of the show. Written in 1988 by Alex Harding, Only Heaven Knows is set in Kings Cross in the 1940s – a brief but glorious period of freedom and tolerance when women enjoyed equality and financial independence and homosexuality was celebrated. It abruptly ended when Menzies came in in the ’50s and fear, persecution and conservatism were the norm. The musical debuted at The Stables in Kings Cross before transferring to the Sydney Opera House, starring David Campbell, in 1995.

“There’s a lot of parallels to what’s going on now, that conservative shift which I think is happening globally,” says Tee. “We’re still fighting in this country for marriage equality which is something I feel very passionate about.” He plays the dual characters of real female impersonator Lea Sonia, a headline act at Sydney’s Tivoli Theatre, and the fictional out, proud and outrageous character, Lana.

Following Only Heaven Knows will be new Australian musical Melba, with Matthews playing opera powerhouse Dame Nellie Melba. In September, the Campbells will work on their first musical together, a new production of Stephen Sondheim’s Assassins (“he’d better learn his lines,” she quips). Then a new stage adaptation of Nick Hornby’s High Fidelity in November rounds out the year.

“The Hayes is vital to the cultural landscape,” Tee says. “It’s come along at a time when it’s really necessary.”

Only Heaven Knows runs at The Hayes Theatre until July 1.