Swimming Against the Tide with Vance Joy

He wrote the feel-good single of 2013, a ukulele pop smash that reverberated across the globe. But after the success of Vance Joy’s debut EP: where to now? 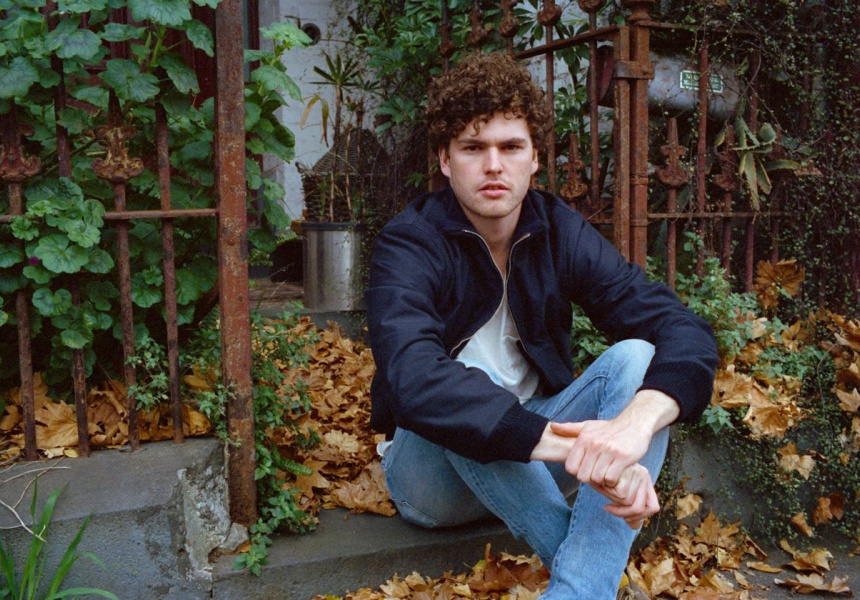 We meet James Keogh (AKA Vance Joy) at The Athenaeum Theatre in Melbourne where he’s about to play in front of 800 fans. It’s not the largest room he’s ever played, but for a change, the audience will watch from their seats. Once he’s done, he’ll go home to sleep and then pack up and fly out to the United States to do the late-show circuit. He has one week in New York and another in the UK, followed by a longer stint in the USA starting with Dallas on October 17. He’ll release his debut album, Dream Your Life Away, in the morning, too, and go back into the van with his band mates; back into a comfortable routine of phone interviews, hotel rooms, support shows, dining halls and theatre venues.

Keogh signed on recently with Atlantic Records, just as the crest of the Riptide wave rolled over the horizon in Australia and into the background, after a number one slot in Triple J’s Hottest 100 and a nomination for the Best Pop Release at the 2013 ARIA awards. Now it begins a new life in America, after a 31-week ride inside the UK top 50, peaking at number 10.

Suffice to say, last year was a big one for Keogh, who was, just a few years ago, mostly concerned with holding his spot in the VFL at Coburg and finishing a bachelor degree in Arts and Law at Monash University. He’s a gifted individual, and he’s handled the sudden rise with a humble and clear kind of logic. But there is that question that everyone’s been asking: how on earth do you back up a song like Riptide? And why, after such a success, did it take so long to release the album?

“Well, I lost my voice at the end of last year, and I couldn’t sing for about two months because I had swollen vocal chords – I pushed it too hard – and got this little swelling thing that means you can’t reach any high notes,” explains Keogh. “I think it was kind of a mental thing as well, because I was smashing it and not really taking care of myself.”

With two months on the sidelines, Keogh explains that anticipation can turn into anxiety, if not managed. “When you haven’t written for a while, you doubt yourself and you go, ‘Am I even a musician?’

“But that is what spurs you on, and makes you work to add to that foundation. You see those musicians with, like, 10 great albums and they’re constantly just trying to stab another song under that foundation to keep it up.”

Refreshed after the break, Keogh finished the first album, Dream Your Life Away, early this year, with American producer Ryan Hadlock (The Lumineers, Gossip). It culminated in an unusual and refreshing release schedule, one that gave Keogh time to distance himself from the sheer scale of Riptide, and reflect on his rise to fame last year.

“You can feel a little bit out of body when you stop,” says Keogh. “Like, your mind and your soul and your body aren’t quite aligning. They’re stretched in different places. I think it’s a symptom of always moving, and needing time to calibrate again. I learned to deal with that. But when you’re not aware of it, it can be distressing and you think, ‘Argh, I don’t even know who I am.’”

Dream Your Life Away is somewhat consistent with Keogh’s debut EP, God Loves You when You’re Dancing, if only with some deeper layers and more melancholic textures. It doesn’t feel like an album that came with any pressure attached, as it darts between soul and folk and pop influences. More than anything, the album shows maturity in Keogh’s song writing, and a brave progression into a deeper sound that burns more slowly.

“I was listening to Childish Gambino talk about our fear of being in the moment and our fear of the future, and it makes us want to climb into our nostalgia bubble. I think it’s good to be conscious of that because the past is gone and there’s no going back there,” says Keogh on his decision to write what came naturally for the album. “And it wasn’t that great anyway – it was just like now.”

Watch the video for Vance Joy’s new single, Mess is Mine.

Dream Your Life Away is out now.