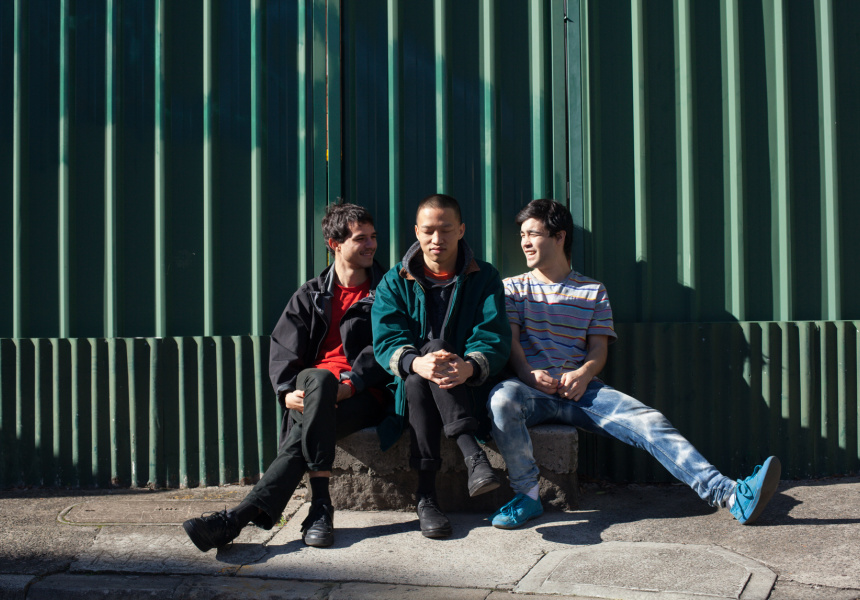 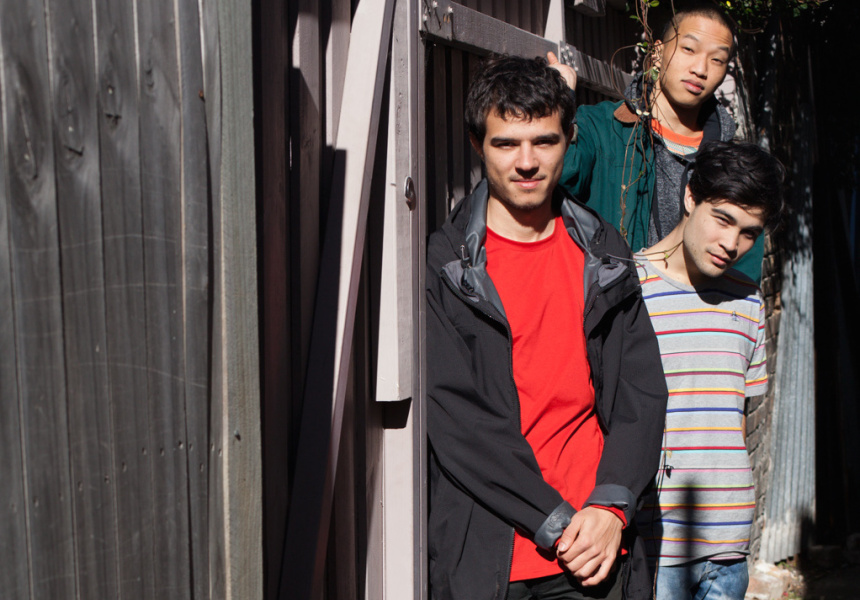 A group of three young guys in the centre of the club convulse to a heavy beat, surrounded by a circle of equally loose partygoers, awed and perplexed in equal measure. Welcome to the world of Black Vanilla. Lips, Lockheart and DJ Plead, (known as Lavurn Lee, Marcus W hale and Jarred Beeler to their mothers), have bubbled to the surface of Sydney’s electronic music scene with their combined prowess for slick production.

It all started as a light-hearted play with smooth R’n’B in 2011. As its sound evolved, Black Vanilla established a legitimate standing in Sydney’s electronic music scene. Deliberately un-signed, the experimental trio feasts nightly on Australia’s darkest dance floors with an irrepressible attitude that earned it two bookings at the Opera House this year for Vivid LIVE – DJ support for Italian disco lord Giorgio Moroder, and a live set for the Siberia Records studio party.

“The beginning was inherently funny,” says Beeler. “None of us come from that sort of thing, we’re not R’n’B stars and we’re not highly sexual or anything,” continues Lee (who is also known to many for his solo projects Guerre and Cassius Select). Still in their early twenties, now when you catch the members of Black Vanilla playing live, you’ll find them sewing sexy vocals into something entirely new. “Things are more minimal texturally, more barren and more aggressive but really vocal-heavy,” says Whale (who also produces as Scissor Lock and is one half of glitch-hop electronic duo Collarbones). “It’s performance-heavy club music.”

A mix tape entitled BLACK BLACK BLACK, released on the boys’ band camp page last year, placed them squarely on the local electronic music map. “We had made a dozen songs before the release, but I remember saying, ‘No, we are going to make new ones because the old ones suck’,” says Whale, realising that a total renovation of sound was in order. “The mix tape gives us so much room to experiment. We don’t have to worry about a label telling us what to do,” explains Beeler.

Black Vanilla’s music is first and foremost intended for a live setting. “That’s when everything works really well,” says Lee. While Lee says early naughties Pharrell Williams is the group’s main influence – “where the emphasis is on the grove” – Whale hands it to a “spirit of hostility” found in death-metal groups (such as local band, Making). “Just going in, throwing it down and not giving a fuck.”

Exercising a totally organic evolution of sound – free of industry obligation or an interest in expanding a fan base – the trio move along quickly. If you saw them last year, you probably won’t witness anything familiar at a Black Vanilla live show today. “It will be curious to see how people adapt to our newer set,” says Beeler, concerned the audience will expect a reproduction of last year’s mix tape. “We have to remember that Call Your Husband is the song that most people have heard,” says Whale, “and it’s easy for us to forget that the tone of that, and the sound of that, is what people associate us with, even though it’s really different now. We are pretty naive in that sense.”

BLACK BLACK BLACK received a management nod from Astral People (arguably Sydney’s youngest and wisest management group) early on – and Black Vanilla recently secured an EP release through Club Mod; Modular Recordings’ new avenue for one-off dance releases. “It will open up our market to a different demographic,” says Beeler. But Whale can’t imagine the venture translating to the stage. “We thought about it as a recording first, rather than as live tracks, so we are not that interested in playing them live,” he says.

While Black Vanilla has recently released a new track called Smacks, it’s leaving album duties aside for now. “We’re playing lots of shows and putting out a lot of music and what’s good is we can put stuff together really quickly and be really excited about the immediacy of it,” Whale says. “That is where we feel good at the moment.” In the meantime, if you haven’t heard its remix of Oscar Key Sung’s soulful All I Can Do – we’d suggest you hit the group’s SoundCloud page right now.