The Secrets of Stage Food, Revealed

Ever wondered what actors are really drinking when they crack open a beer? Or what’s in that elaborate pasta dish they’re supposedly devouring? 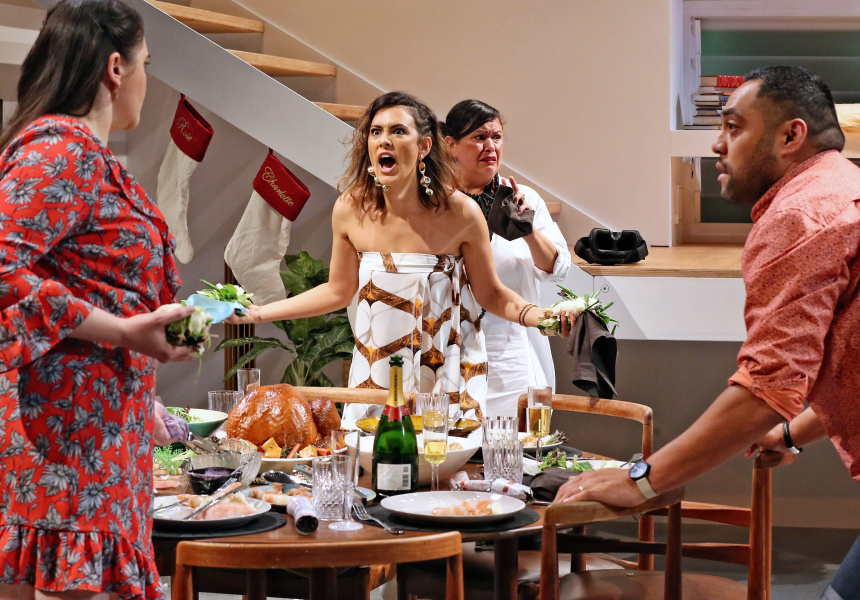 The cast of Sydney Theatre Company’s Black is the New White.

Elizabeth Gadsby had a career as a performance and installation artist before studying design at NIDA. Nothing could prepare her for the mental gymnastics required whenever a script includes food.

Take the upcoming Sydney Theatre Company play Dinner. The black comedy revolves around a wealthy couple hosting a dinner party for their equally well-heeled friends. What appears to be a perfectly predictable three-course meal begins to take a turn for the sinister. But the meal itself seems simple enough: soup, lobster, and dessert.

A week out from opening night and Gadsby, now STC’s resident designer, was still solving puzzles thrown up by UK writer Moira Buffini’s award-winning script. On the menu is a celeriac and parsley soup.

“Originally we tried lime jelly but it looked really weird when they started eating it, so now it’s made out of spinach and banana. But the trouble is we’ve found it stains, and all the napkins are white linen,” Gadsby explains.

Then there’s the lobster. “We can’t afford to give our cast lobster every night, plus you can’t buy Atlantic lobster in Australia so it is, of course, fake,” Gadsby reveals. “The actress who eats it is vegetarian and we went through many brainstorming sessions for what could possibly look like lobster. We considered tofu, but it was too crumbly so we’ve used lychee flesh instead.”

The cooking of the lobster is equally as ingenious. While it appears to be boiling away happily on the stovetop, the Sydney Opera House prohibits live flames onstage. The props department has cleverly solved this via a blue LED light underneath it and a pipe drilled into the back of the pot which pumps out faux steam. “Props is always dealing with the magic stuff,” Gadsby explains.

Gadsby works between art forms, from opera including Fly Away Peter and The Rape of Lucretia for Sydney Chamber Opera; to theatre, and dance including Epic Fail for Perth International Arts Festival and WA Ballet. Earlier this year she dabbled in fashion, designing Carla Zampatti’s show for Mercedes-Benz Fashion Week.

Quite often Gadsby’s role extends far beyond designer. The science – or what she refers to as “theatre tricks” – behind stage food is a juggle she artfully controls between the props department, stage management and the actors’ particular and sometimes peculiar requirements.

For the STC’s recent production of Cloud Nine the actors requested something to nibble for a scene where they were sitting around a table. “Originally they wanted lollies, but we realised it was Victorian Africa so they wouldn’t have had them. Then we suggested nuts but stage management said no, they could choke and make the actors’ mouths dry. Then we considered cherries but stage management said ‘what about the stones?’ and also they weren’t really in season. In the end no-one was picking food out of the bowl anyway, so I said, ‘Right. Let’s cut the bowl’.”

The solutions are as creative as they are endless. In Black is the New White the actors have a mashed potato food fight; but designer Renee Mulder discovered the powdered potato she was originally using dried hard, making it disastrous to clean. They ran with polenta instead. In Disgraced, Paula Arundell’s character proclaims: “Fennel, I just love fennel!” as she tucks into a salad. In fact the actor detested the vegetable, so finely chopped celery was brought in as a substitute.

Stage drinks require some wonderfully inventive solutions, too. WHS rules dictate actors cannot consume alcohol on stage, so beer bottles are often emptied and refilled with a non-alcoholic beverage before being recapped; or non-alcoholic bottles have their labels soaked off and replaced with custom-made labels.

“White wine is really tricky because when the lights shine on it, it either looks like water, or if it’s a warmer light, it looks like they’re drinking urine,” Gadsby explains. “We have whiskey for Dinner and it needed to be a nice one so we bought that, decanted it, filled it up with tea then at the end of the show we’ll sit down and drink it together. It’s one of the perks I guess.”

Gadsby appears to enjoy the challenge. Yet to be solved for Dinner is a recipe for vomit containing recognisable traces of the character’s dinner. “We tried using the lychee but that didn’t read very well, it looked watery and lumpy so now we’re trying the green soup. But I’m worried about staining. Next we’ll try a cream-coloured smoothie with green food dye that doesn’t stain,” Gadsby says cheerfully.

The Sydney Theatre Company production of Dinner runs at the Sydney Opera House from September 15 to October 28.