The Rise of La Femme

From a castle in the north of France, La Femme founder and lead guitarist, Sacha Got, talks about the ascent of his nine-piece band. 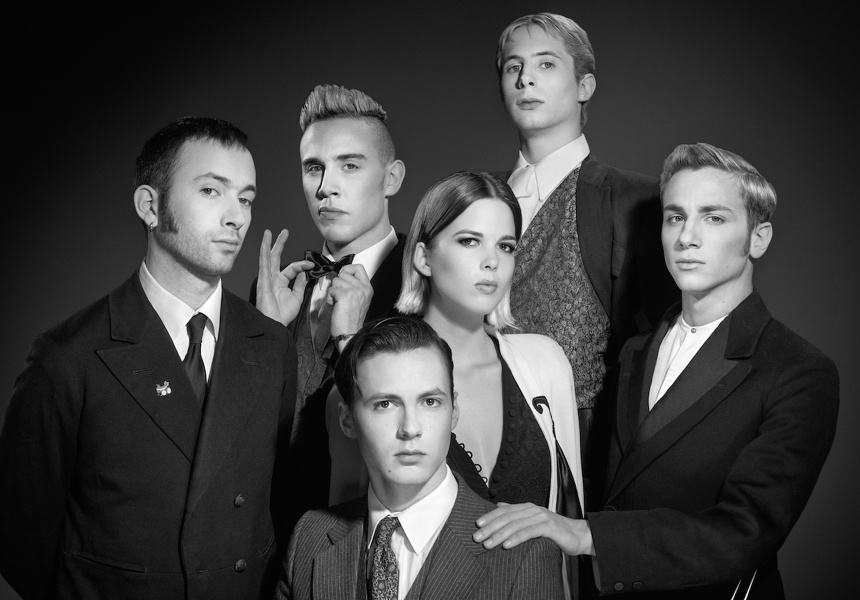 At the moment there are two particularly interesting things about Sacha Got, the founder and lead guitarist of French band, La Femme. The first is that he’s living in a wing of a castle in the north-west of France with the other eight members of his band. They are three days into a three-month writing and recording stint. It’s luxury you rarely hear of in music today, but the band’s sharp rise last year – culminating in a nomination for Best New Act at the French Music Awards – is such that it’s being afforded much time and space to write and record its sophomore album.

The second is that the ninth track on the band’s debut album, Psycho Tropical Berlin (called It’s Time to Wake Up (2023)), is brilliant and stylish and it has me star struck.

Sacha Got grew up in the seaside town of Biarritz on the south-west tip of France, just a short drive over the border from San Sebastian in Spain. “It’s not so exotic,” he says at one point, explaining that Biarritz is a cold and lonely place in winter, controlled by the elements; the sweeping waves and furious winds that wash and whip in from the Bay of Biscay. It was in this isolation that Got and the band’s other founder, Marlon Magnee, founded La Femme in 2010 and took the show on the road to Paris.

They have found much success in the ensuing years, with a self-titled EP in 2010, a follow up in 2011 called Le Podium #1, a third EP in 2013 called La Femme and a much anticipated debut album just last year, which won the coveted Album Revelation of the Year award at Victoires de la Musique, an annual French Music awards ceremony at which artists are recognised by the French Ministry of Culture. Early this year the band cemented its place in Parisian culture by providing the soundtrack for supermodel Cara Delevigne on the latest Saint Laurent campaign.

In just four years La Femme has climbed the ranks in France and toured the rest of Europe, and this summer it is coming to Australia – straight from the castle – to tour the east coast and play So Frenchy So Chic.

But alongside the accolades and the hype, Got and his band have produced music of the highest order since its inception. Taking influence from bands such as The Velvet Underground and Kraftwerk, it plays on suspended notes and builds tension; combines warm synthesisers and looped beats and futuristic effects, but it retains that beautiful isolation that exists in the French music bubble. Among the bands at So Frenchy So Chic this year, La Femme shapes as the musical outlier because its influences are uniquely torn between old-world psychedelia and the sound of Paris today.

La Femme are playing at So Frenchy So Chic in the Park on January 17 at St John’s College.