A Guitarist? Want to Perform in a Sydney Festival Concert?

Ramones-loving minimalist composer Rhys Chatham is coming to Sydney and needs you to be a part of his life-changing concerts. 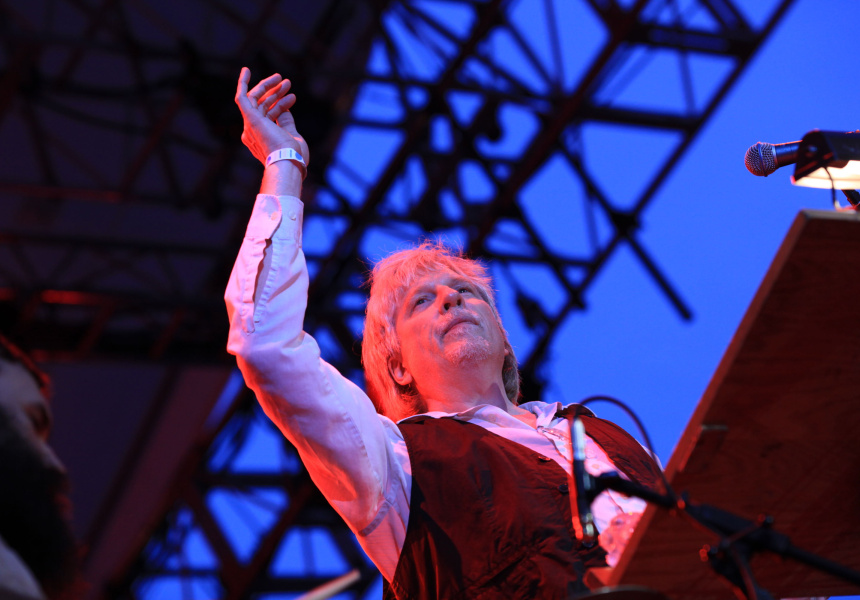 Rhys Chatham grew up in the company of legendary minimalist composers Philip Glass, Steve Reich and Terry Riley. In fact, so well does he know Glass he refers to him as “Uncle Phil”. But the classically trained musician and composer from New York – today a revered name in his own right – carries a secret he is embarrassed about to this day.

An accomplished musician, Chatham was wandering back to his apartment in the East Village with his friend and fellow composer Peter Gordon when Gordon asked him if he’d ever been to a rock concert.

“It was 1976, I was 24 years old and I had to confess that no, I hadn’t,” Chatham says from his home in Paris, quickly adding he liked rock, and bands such as the Velvet Underground were on high rotation on his turntable. “Peter said there was this really nice club right near where we rehearsed and a really good group were playing and I should go and hear them.”

The club was none other than CBGBs. And the band? The Ramones. That night Chatham’s life changed forever.

“It blew me away. My first rock concert; seeing these four skinny guys with electric instruments. I’d grown up in concert halls seeing [celebrated Canadian pianist] Glenn Gould – this was completely out of my range of experience.”

It is worth noting Chatham was no slouch when it came to music. A graduate of New York University, he worked for, and was later in a band with, La Monte Young, the seminal composer whose reductive strategies were influential on minimalist composers, Reich and Glass among them. Chatham himself was a pivotal part of a burgeoning New York Soho scene that fused jazz, classical and punk rock, and was the inaugural music director of avant-garde multimedia art space the Kitchen.

He spent enough time listening to the music of his minimalist predecessors to know he needed to find his own voice: Reich was influenced by Ghanian drumming rhythms. Glass incorporated ideas from process artist Richard Serra.

That night hearing the Ramones gave Chatham an idea.

“Their music was a lot more complex than what I was doing, but as a minimalist I felt I had a lot in common with the repetitive and reductive aspect of their music. Thanks to the Ramones I wanted to incorporate rock techniques into my music.”

He spent six weeks practising on a friend’s Fender Telecaster, learning basic bar chords and blues scales. Another year was spent gigging with rock bands, and embodying the rhythms left him ready to incorporate the minimalist techniques of Riley and La Monte Young into a rock context. The result was Guitar Trio for three electric guitars and drums. He debuted it at CBGBs.

“It was the height of the punk period and if you played at Max’s Kansas City or CBGBs there was a kind of violence in the air and the fans would throw beer cans – with the beer in them – and that’s if they liked you. I was thrilled to be playing on the same stage as the Ramones and Patti Smith and Talking Heads but frankly, I was afraid I was going to get lynched because we were playing one note the whole time – the low E.”

He needn’t have worried. The crowd went wild, heralding the birth of a new voice that would go on to have a profound effect on Sonic Youth, among many others.

From there Chatham advanced to six guitars, bass and drums before evolving into 100 in 1989, for his Lyon debut. “Why 100 electric guitars? I wanted to make something that was special for the beautiful timbre you can only get with 100 electric guitars.”

After international performances from Paris to New York, Chatham is bringing his work A Crimson Grail to Sydney Festival. And here’s the exciting part: wherever he performs the guitarists are made up of locals, from serious amateurs to complete pros.

The score ranges from moments of delicacy to thunder, with ripples of sound emanating from each individual amp. The orchestra is organised into groups of four, in Sydney led by three local female guitarists: Lisa MacKinney, Bonnie Mercer and Julia Reidy.

“We’ve had 11 year olds and 80 year olds, all walks of life, the only requirement is they know how to play. They don’t even have to read music because we have tab versions,” Chatham says enthusiastically.

For Chatham it is gratifying to see the close social networks that form. “All these people come out of the woodwork of the city, many of them didn’t know each other before, and afterwards new groups are formed.” In Portugal a couple ended up marrying and now have a son.

Chatham is on the hunt for more guitarists to help with the Sydney show. “If you’re a serious amateur and you can play, [join us], it’s a social experience and all kinds of beautiful things come out of people playing this.”

A Sydney Festival production, A Crimson Grail *will be performed at Carriageworks on January 12 and 13.