For a second year, Vivid LIVE entrusted Sydney’s youngest artist management and touring company to make studio party magic at the Sydney Opera House. So who are these Astral People, and how did they make it here? 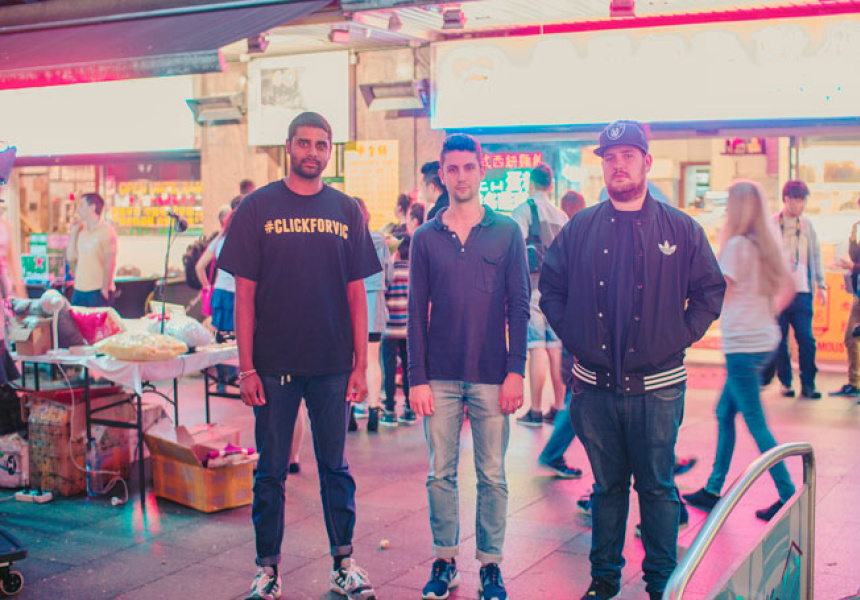 You may associate Astral People with an underground party, a hangover, an electronic solo artist, an international DJ set or a festival stage. Whichever it is, if you know the name, you’ll know it has become a trusted tastemaker with a surging local following.

Lee Danilewitz, Vic Edirisinghe and Tom Huggett started the company in 2011 after noting the dearth of electronic bookings around town. Since then they’ve filled the void so well that Vivid LIVE invited them back to the festival to throw a studio party on May 30 worthy of the Sydney Opera House.

“There was no outlet for electronic artists like these to play in Sydney when we first started,” says a gratified Danilewitz, who manages his brother Jonti as well as I’lls, Collarbones and Cosmo’s Midnight. “To have built ourselves up to an event like Vivid means we have been successful in creating a community for these artists.”

Danilewitz is talking about the 22 Sydney acts he and his two friends/colleagues collectively manage. They also put on more parties than they can count, run an annual music festival called OutsideIn and tour the likes of rappers Freddie Gibbs and Action Bronson, London master DJ Floating Points and Detroit techno hero, Omar S. Phuture, the group that pioneered acid house in Chicago in the ’80s, is joined at the Vivid Opera House party by a host of contemporary local and international acts.

And while names such as L-Vis 1990 and Bok Bok of Night Slugs might resonate strongly inside the scenes that spawned them, it still took a leap of faith for Vivid to book them. “It’s amazing the Opera House took a chance on us conducting such a large experiment with these niche acts,” says Huggett who manages the company’s most recent signee, Basenji alongside the likes of Wave Racer, Wintercoats, Bon Chat Bon Rat, Hugo Frederick and Cliques. “If you’d asked us about this a couple of years back, we would have found it very difficult to believe,” says Edirisinghe, who has a loaded management roster that includes Dro Carey, Rainbow Chan, Black Vanilla, Alba and many more.

Astral People does not follow industry protocol and is not – contrary to public perception – a record label. “It’s always on our minds whether or not we want to do the label thing,” says Danilewitz, “But we don’t feel we can do it justice right now,” says Edirisinghe, finishing his thought. While there has been an increase in vinyl sales in Australia, artists still make their money playing live shows. “Fees for shows have never been higher,” says Edirisinghe, as Huggett explains the importance of touring. “Wave Racer has definitely made money from selling his music, and he’s only released a couple of sounds, but it comes down to selling tickets. That’s why you just have to keep on playing.”

Astral People’s strength lies in uncovering bedroom producers based on taste, longevity and marketability. “Our job is to predict the artists that are going to have a sustainable career over many years,” says Edirisinghe. An artist’s personality is part of making this judgement. “You don’t want to work with an asshole, a princess or a diva,” says Huggett. While a daily influx of demos arrive, the guys still adhere to their original method of scoping for acts. “It’s about knowing where to look online,” says Danilewitz who discovered Cosmo’s Midnight on a music website’s artists-to-watch list. “I saw a photo and I listened to a track and I was like, ‘Oh woah, these kids are pretty amazing’.” Further research on the group’s Soundcloud page supported Danilewitz’s impression and together with Huggett, they approached the band for management.

“For tours, we start off on blogs, Soundcloud and sites like Hype Machine, Pitchfork, The Fader and Accelerator,” says Huggett. “We keep a watch on the ones we think have potential.” Once Astral People score an act, it is the friendliest tour host around, befriending anyone who comes to town and hosting barbeques at the founders’ Surry Hills pads. Perhaps this explains why they keep scoring talent such as London’s Oneman (signed to Young Turks overseas) and making new, high-profile alliances, such as the one with the Sydney Opera House.