One Foot Out of the Grave

Gory Australian zombie-film releases are making waves on the international festival circuit. We speak to three directors who are premiering their films in Australia. 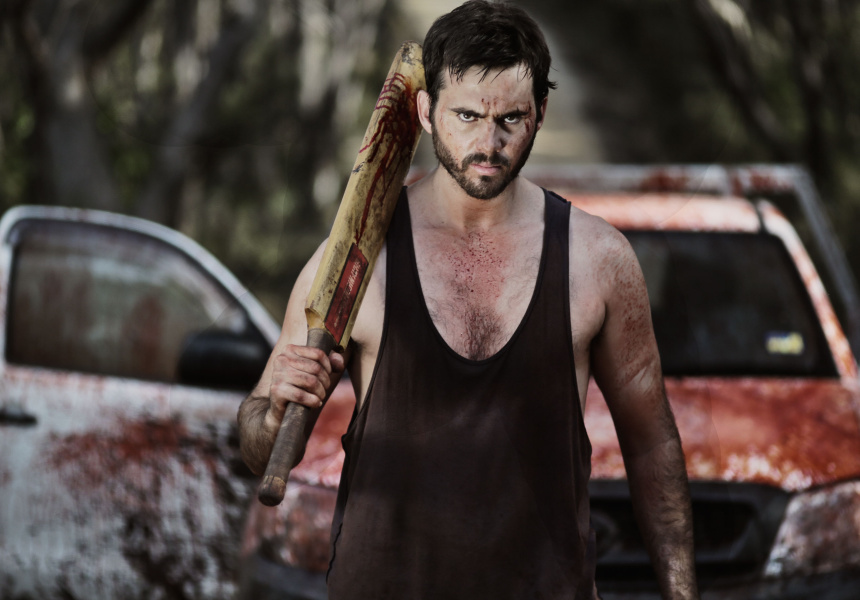 Large-scale productions have redefined the zombie genre and given it mainstream success. But on the indie scene, a solid group of up-and-coming, first-time directors are using gore to gain a foothold in the film industry. Despite the thematic accessibility of the genre, creating a believable (and enjoyable) zombie apocalypse still relies heavily on special effects, money and good script writing.

It took four years for brothers Tristan and Kiah Roache-Turner to make their film, Wyrmwood. They dealt with financial constraints by breaking the film down into a series of shorter exploits – crowdfunding and shooting in two-month blocks. “We really picked the worst concept we could for an independently funded film,” says Kiah, referring to the high running cost of special effects required to create Wyrmwood’s methane-breathing zombies. The film, which Kiah describes as Mad Max meets Dawn of the Dead, received accolades at both the Toronto After Dark Film Festival and Fantastic Fest in Austin.

“People are a bit more forgiving of a B-grade horror film,” Ryan Coonan tells us. Coonan is the director of Waterborne, which features a zombified kangaroo. He uses suspense to drive the story and at just nine minutes long, it effectively creates an edge-of-your-seat feeling that climaxes with a vicious zombieroo attack. “It’s all about trying to get the balance of engaging people psychologically and emotionally rather than shoving shocking images in their faces,” he says. Waterborne premiered to audiences at Sitges Film Festival in Spain.

Kiah Roache-Turner believes that true fans of zombie films will, “Always go see a zombie film – regardless of its quality.” Crossover appeal into mainstream audiences is a much greater challenge. “I knew if we were going to put a zombie film into the Australian cannon we couldn’t just go, ‘let’s blow up a bunch of heads and go for gore and laughs’. Wyrmwood is unashamedly over-the-top and gory, but there is a realism we wanted to nail,” he says. This realism is created through classic Australian deadpan “callous humour” delivered by believable characters. “The stakes have to be high and it has to be grounded or the audience won’t give a shit about these characters,” says Kiah.

Nick Kozakis and Kosta Ouzas, the directors of Plague, wanted to “freshen up” a saturated market. Casting off the traditional “zombie tag”, they created the post-apocalyptic world of Evie and John who are being attacked by a faster and more vulgar zombie than your traditional foot-dragging Romeroesque beast. “The approach we took was to harness inner-psychotic desire – when you will run through any bit of material just to get at your prey,” says Kozakis. Despite being based around an epidemic that has killed humanity, the real focus of the film is the plague of the cultural psyche. In his film, “that social contract no longer exists, rules don’t exist and you don’t have to follow them anymore,” he says.

So what is more important when making a zombie film – suspense or gore? “I don’t think you should shy away from gore but I think suspense is definitely a more powerful tool,” Kozakis says. “Your protagonists have to be under attack in every single way.”

As for explaining the appeal of the zombie apocalypse, Roache-Turner says matter-of-factly, “Well, for one thing, you can shoot your annoying neighbour in the face ... whether he is a zombie or not.”

A Night of Horror at Dendy, Newtown in Sydney
November 22, 7pm.