Joe Seaward, drummer for Glass Animals, speaks about the band’s impending return to Australia this summer. 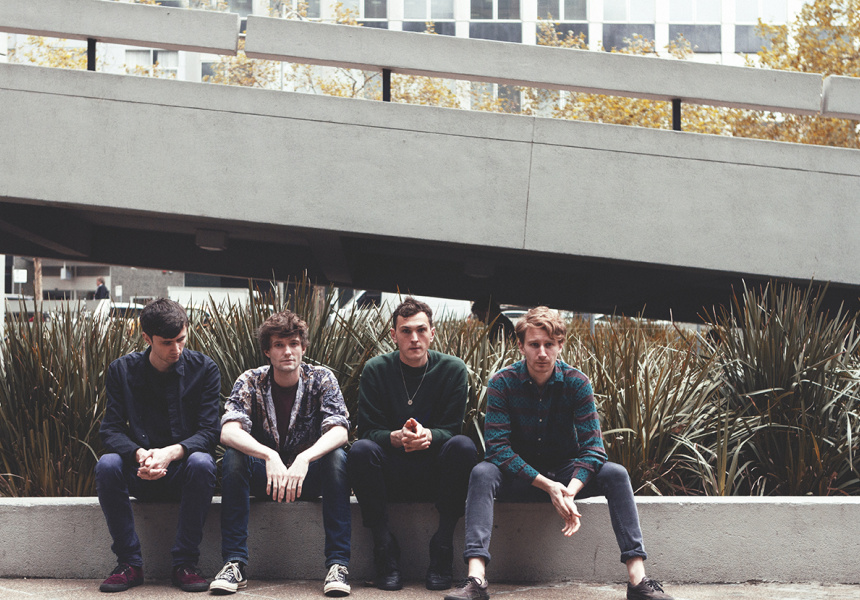 When Glass Animals passed through Sydney in April this year, it had only released two singles but had sold out a gig at Oxford Art Factory. Since then the band’s debut LP, ZABA, was released to resounding success, sparking multiple world tours. The band’s sound is incredibly alluring; nonsensical lyrics combine with synth hooks and jungle drums. Before Glass Animals returns to Australia this summer for Falls Festival and headline sideshows, we spoke to drummer Joe Seaward about the band’s time abroad.

Seaward speaks in a cheery Oxford accent from a dark hotel room in Munich. Guitarist Drew MacFarlane is fast asleep by his side. The band has just wrapped up a support tour with Metronomy which flung them across France. “Me and Dave [Bayley, vocals] grew up listening to Metronomy when we were young,” says Seaward. “It’s always strange supporting another band – you’re sort of filling in time for a lot of the crowd. It’s our job to win those people.” It’s the first support gig Glass Animals has done in a long time, having gotten accustomed to headlining its own shows since its record was released.

“It’s always a slightly different atmosphere than what we’ve been used to, so we adjusted the way we were doing things. We made it more punchy and less drawn out; to get people’s attention you need to make a bang,” Seaward says. The band spent its European summer on the festival circuit, playing four shows a week, something they’ll revisit briefly for Falls Festival in Hobart, Lorne and Byron Bay over the New Year period.

“People’s attention spans are much shorter at music festivals,” says Seaward. “Because there are so many vivid colours and everything is bright and fast and manic, you need to get people’s attention by being all of those things. But a lot of the songs we play aren’t short or punchy or fast, so there’s definitely a balancing act somewhere in there.” Glass Animals will have no trouble at Falls. Its live set cycles through chill beats and huge electronic crescendos.

Glass Animals will be sharing the Falls stage with Alt-J, Asgeir, La Roux, Movement, Tycho and dozens more. But judging from past festival experiences, Seaward doesn’t predict much artist networking. “I’m not the sort of person who would ever dream of going up to a musician I love and sparking up a conversation. We mainly sit in a group just being completely socially inept.”

Although ZABA was only released in June, hype for its sophomore project is already mounting. Seaward describes that concept as terrifying. “There was a slight hangover after we finished the first record,” he says. “We’d kind of spent every creative ounce of juice we had.” But recent months spent touring together as a band has provided time to recharge. “There have been many more ideas popping up and being passed around the bus, but it’s early days. It’s one of those processes that sort of happens all the time and at anytime. It’s fun, it’s what we do it’s what we love doing.”

Glass Animals will be playing at all three Falls Festivals. Its sideshows are at the Hi Fi Sydney on January 9 and Hi Fi Melbourne on January 10.