A New Stage Production of Wake In Fright Is Political, Provocative and Freshly Relevant

This one-woman re-imagining of the novel and Ozploitation classic draws on everything from the satirical blog Brown Cardigan to a punishing electronic score in an examination of toxic masculinity and Australian identity. 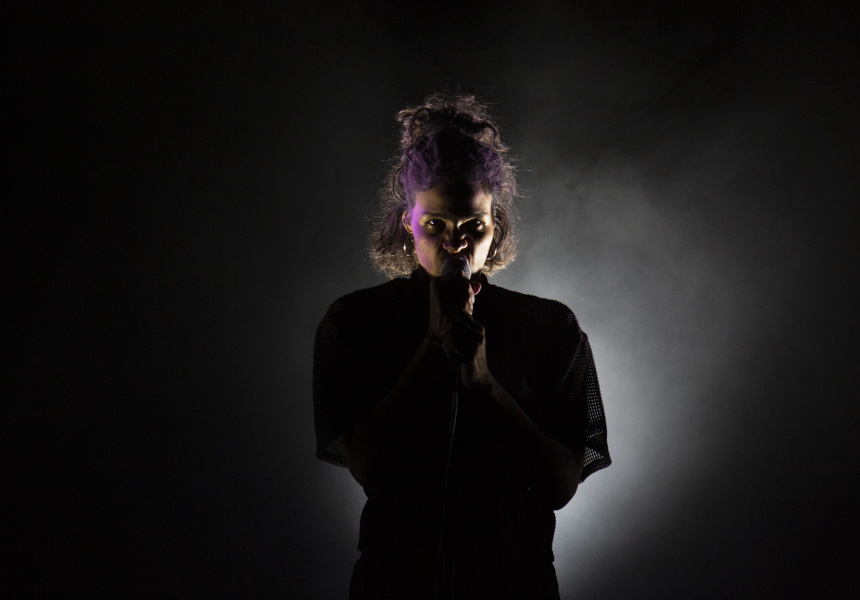 There’s an urban legend about the premiere of the classic 1971 Australian film Wake in Fright, adapted from the 1961 novel of the same name. As the closing credits rolled on the brutal indictment of Australian identity, a man in the audience stood up and yelled “That’s not us!” Actor Jack Thompson replied, “Sit down, mate. It’s us.”

A stage version of Wake in Fright premiered in Melbourne last year, and now it's coming to Sydney. The story revolves around John Grant, a schoolteacher stranded in the nowhere town of Bundayabba (“The Yabba” to locals). To fit in, he gambles, drinks himself stupid and goes on a savage ‘roo hunt. But from the outset, the stage version is markedly different. Jamaican-born actor Zahra Newman relates the whole story. She’s the narrator, the lead character John, and every resident in the town – presented, in this version, as a microcosm of the nation.

Though she’s lived in Australia for over a decade, Newman says she’s never escaped her status as an outsider. In a searing opening monologue, she tells us of the numerous times she’s been asked where she’s from, or told she’s not a true Australian.

“It’s a very heavy question, particularly for those born and raised here,” says Newman, on the question of what it means to be Australian. She asks another heavy one: “What characteristics do you have to have as an immigrant to be fully integrated into this society? There are parts of yourself you must kill. They must go away. That’s how you gain acceptance. That’s how you get a seat at the table.”

It’s a powerful reading of one of our most powerful national stories. This new version – developed with writer Declan Greene – leans far more on the original novel by Kenneth Cook than the film by Ted Kotcheff. But while the story remains the same, still nominally set in the ’60s, it’s been brought up to date.

Newman stands alone in the centre of the stage, aided by a score and multimedia design from Melbourne-based electronica duo friendships, which imparts the feeling of a debauched and regrettable night at the club – an update of the original’s outback pub. And early in the play’s development, Newman and Greene consulted the editor of Brown Cardigan, probably the finest online curator of murky and unnerving Austalianness. Green-flamed skull GIFs and questionable fonts flicker across the stage as that rap airhorn sound pierces your eardrums. All of this – along with Felicity Hampson’s modern, minimalist and nightmarish lighting and projection design – creates a link between the ’60s and now.

During her opening monologue, Newman calls out white Australia for othering her, for prying into her identity while being confused about its own. The scrutiny she faces recurs throughout the show. The words “WHERE R U FROM” in a variety of poor spellings are projected across the stage. It’s a dangerous game to play. Being accused of racism is horrifying for almost everyone.

“I don’t want to think that I’m calling Australians [broadly] racist,” she says. “But I appreciate that people might feel that way. I think it’s difficult for any culture to have a clean mirror put up to your cultural practice and your behaviour and your transactions with outsiders.”

During production, Newman and Greene spent time talking about the narrative that Australia is a benevolent and generous country, a nation of gentle larrikins. And Newman and I discuss Yassmin Abdel-Magied, whose remarks contrasting Anzac Day rhetoric with Australia’s treatment of refugees challenged the notion that we’re a benevolent and generous country. The ensuing backlash saw Abdel-Magied labeled persona non grata by the press.

“Absolutely if I were to address Anzac Day I’d face some dire consequences,” says Newman. “It could look like a city-dweller artsy type passing judgment on regional Australia. But it’s more than that. It’s about what this story means now ... I hope that people are challenged by it.”

In adapting an old work for stage, whether it’s William Shakespeare or Kenneth Cook, questions remain: why adapt it? How is it relevant? Rethinking a seminal text of Australian toxic masculinity as a one-woman show could easily be a blunt gimmick, but with Newman’s voice at the fore – simultaneously Australian and a self-described outsider – Wake in Fright is political, provocative and charged with fresh relevance.

Wake in Fright is at the Sydney Opera House from February 11 to 15.