What would you do if you saw a stranger faint at a train station? This year’s New Breed series explores that question and more via stunning movement. 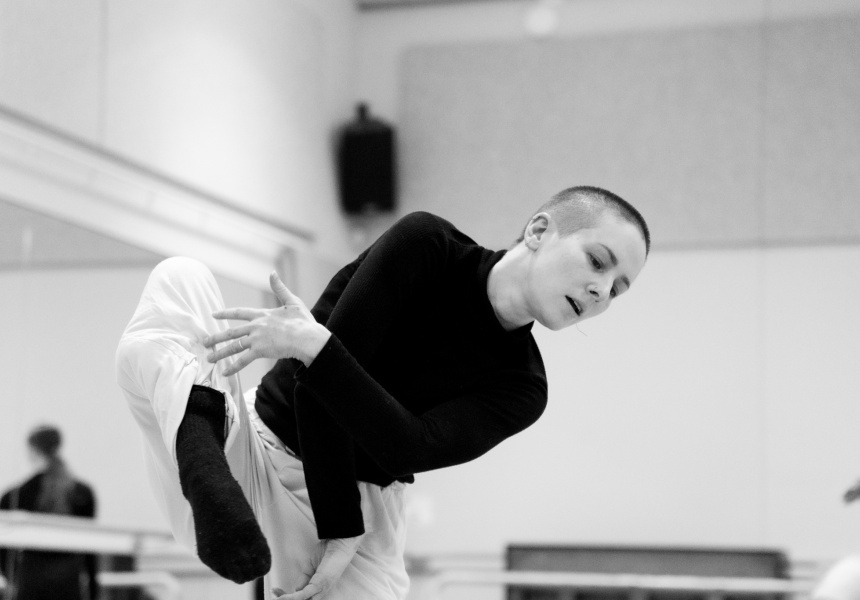 What would you do if you were standing on a crowded train station platform and the young lady next to you suddenly collapsed? Would you go to her aid, or simply get on the train and pretend nothing happened?

This situation confronted Jesse Scales recently – only, she was the one who fainted. “It was a busy time – peak hour – and not one person offered help. My dress was all the way up over my face and no one had batted an eyelid.”

Scales, a senior dancer with Sydney Dance Company (SDC), was moved by the lack of response to explore “the bystander effect”, a social-psychological theory that explores how people are less likely to help a victim when in the presence of others. The theory and its variables have inspired her work Inertia, choreographed for SDC’s New Breed, the company’s annual celebration of new experimental choreography at Carriageworks.

This year’s program sees Scales, fellow SDC dancer Chloe Leong and independent choreographers Joel Bray and Raghav Handa each create a work for what is typically an exciting evening of fresh choreographic talent.

Inertia is Scales’s second choreographic work with the SDC, following her successful 2016 debut What You See. Her creative process began over Zoom in April, when the company was in lockdown, and all dancers were working from home.

“We were all very, very grateful to have something to inspire us when we were stuck in our bedrooms, so that kept spirits high,” she tells Broadsheet. The movement she created needed to take into account both small bedrooms and large backyards. All the choreographers were also required to create works that adhered to social distancing – so no touching or partnering.

“I’d had many ideas of partnering, but with one door closing another opens and it flips your perspective about how to approach things, which I loved – it brought up some great material,” Scales says.

A collaborative choreographer, Scales asked each of her 12 dancers to respond through movement to a poem she’d written. She also had them show how they would respond to the situation she’d found herself in at Town Hall Station.

“Unfortunately for my piece they’re all quite lovely and would help ... but I’m always super curious about the mind and the variables there are to make people make the decisions they do. Sometimes it depends on what they’ve been through in their lives – do they feel helping would put themselves in danger? It doesn’t have to be vindictive,” she says.

Inertia will be performed to The Rocket Builder by Jóhann Jóhannsson and Let My Key Be C by Nils Frahm and Anne Müller.

While Scales’s work began on Zoom, much of Bray’s creative process was undertaken during the quarantine the Melburnian endured on arriving in Sydney.

“Fifteen days in a small room, no open window, you don’t see a person, they leave a paper bag of airplane food outside your door and you pay $3500 for the privilege,” Bray – a proud Wiradjuri man who performs with Victorian dance company Chunky Move – laughs wryly.

Nevertheless he was grateful to be kept busy. His work, Wagan – the Wiradjuri word for raven or crow – was inspired by the evocative classical instrumentation of Yuin composer Brenda Gifford (it spoke to him of the bush), and by a story his father tells about the crow, once a beautifully coloured bird that was burnt when it became too proud.

“There are many versions of the story across traditional language groups but for mob the crow is often the problem solver, the wise man. People don’t just see a crow, they see their uncle or grandmother, the ancestor who handed down the totem that is the crow,” Bray explains. “From a European perspective black birds are sinister harbingers of doom, and I wanted to reframe this creature from Indigenous cosmology as creatures of great beauty.”

The seven dancers will be costumed in body stockings inspired by the beautiful colourings of the finch endemic to the country of Bray’s great, great grandfather.

Wagan is a departure for Bray, who often creates challenging, political works around race and sexuality. “I’m hugely aware how many of my peers are struggling right now because of what’s been taken away from us. People have lost whole tours, so I’m very aware how fortunate I am to be making a work in 2020 and [with] these amazing, generous dancers,” Bray says. “I wanted to make something of beauty, optimism and hope.”

New Breed is the first time any major NSW dance company has been back on stage since March, and the dancers are beyond excited.

“I can’t wait,” exclaims Scales, who is also dancing in Handa’s work. “Being on stage is definitely what I enjoy most, connecting with the audience and being able to present art that creates conversation and challenges people to think.”

New Breed at Carriageworks runs from November 26 to December 12. While the season is sold out the company is hopeful of releasing more tickets. Join the waitlist here