My Sydney: Satirist Mark Humphries On His Fave Cafe and Restaurant – And Even What To Order and Where To Sit

Plus the best place to buy an umbrella, the karaoke place that makes you sound as good as you do in the shower and the city’s automation feature helping the aspiring Logies host and resident ABC 7.30 funnyman live a stress-free life. 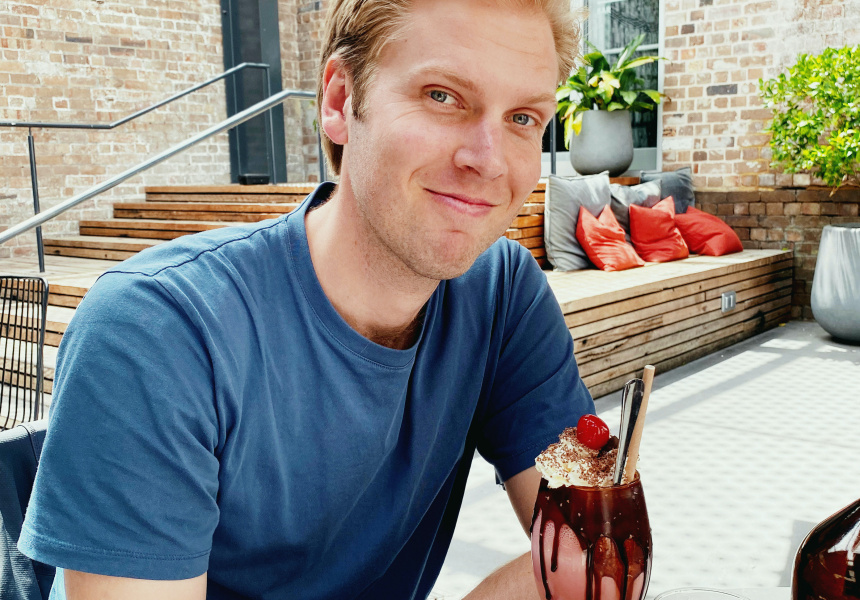 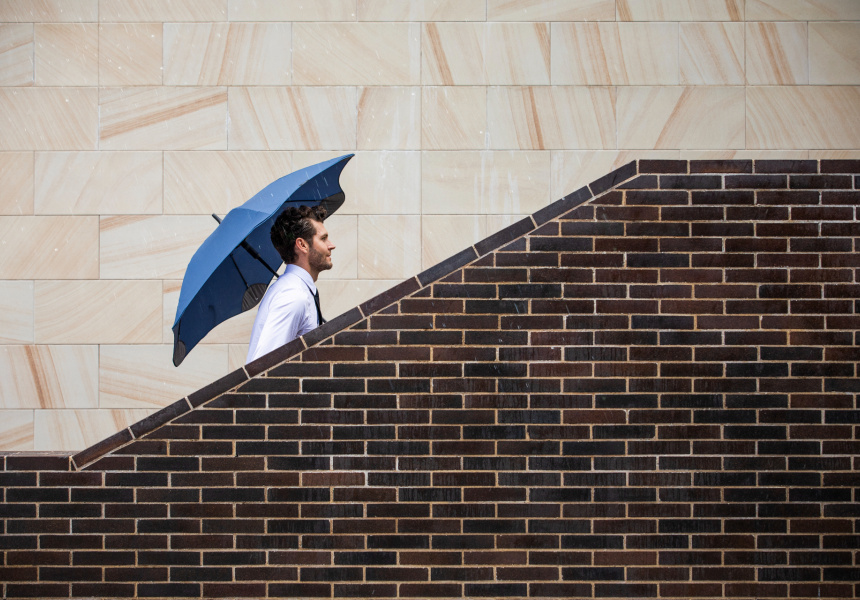 Tell us a little about yourself
I’m an aspiring Logies host living in the northern suburbs with my wife and two boys. I will make no further reference to them in this interview; this is all about me.

What’s the funniest thing about Sydney?
Smooth FM presenters trying to guess what I’m doing. “Maybe you’re dropping the kids off at school or driving into work”. I’m double-bagging the garbage because the first bag is leaking bin juice – you’re never gonna guess that.

What’s your favourite restaurant?
Nomad. The mark of a good restaurant is how quickly they bring you water, so by that metric, Nomad is the best restaurant in Sydney. If I see burrata on a menu, I’m ordering it every time, and the best burrata I’ve come across is the one at Nomad with fennel jam. If you’re reading this, Nomad, bring back the cannellini bean dip with burnt butter and cumin. Where to sit? In a corner so no one sees me mopping up the toum from the plate of barbeque spatchcock.

It’s your birthday – where and what are you doing?
No breakfast, just leave room for The Classics menu from Chin Chin. Those dishes keep coming and they do not miss. Good value too; $69 or something. Then roll on to karaoke at Echo Point on Pitt Street with as few people as possible. Large groups for karaoke? What are you thinking. You’ll only get to sing one song every half hour. To hell with that. Top it all off with an evening of musical theatre at the Hayes in Potts Point. I like musicals, you should too.

Where do you brunch or breakfast?
Henry Lee’s in Redfern. They’re insanely creative with beautifully presented food – they’re like mini edible artworks. It’s actually impossible to order a bad meal there. More than one dish contains crab meat, so you know they’re not messing around. If you can get a bench, you’ve always gotta go a bench so you can spread yourself out. They’re also slightly higher than the chairs, so it gives you a feeling of taking the high ground.

What’s one of the city’s most underrated places?
Echo Point karaoke. Located smack bang in the middle of the city, it has a cheap hourly rate, good song selection and a sound system that makes you sound as good as you do in the shower.

Favourite shops
Top3 by Design in Crows Nest. If nothing else, get yourself a decent umbrella. Every time it rains in Sydney, you see cheapo brollies sticking out of bins. It doesn’t need to be like this. The first umbrella I bought from Top3 lasted me a decade.

I’ve never shopped at Joe Bananas, but it’s my dream to one day do so. It’s ideal for the man who has the courage to dress in bold colours like Karl Kruszelnicki or Matt Preston. One day…

When you want to impress someone, you take them here
The Chinese Garden of Friendship in Darling Harbour. It’s this oasis in the middle of the city and, short of a massage parlour, it’s the only place in the city where you can feel truly relaxed. The teahouse there also does good scones, and Lord knows the world needs more scones.

Give a shout to a person that makes your city a better place
Nick Maher. I’ve never met him and I had to Google to find out his name, but he created the Tripview app. As someone heavily reliant on public transport, it’s been immensely useful to me for more than a decade and if I ever meet the guy, scones are on me.

Mark Humphries is the resident satirist on ABC TV’s 7.30. He’ll be appearing in Spin – Election 2022 at the Sydney Comedy Festival on May 4. His book On Politics and Stuff is out now.

“My Sydney” is a regular column discovering the places and spaces that captivate and entice Sydney’s well-known residents.