A Sydney Exclusive: Horses in the Sky

An Israeli dance piece with music by Bjork, F**k Buttons and Elvis Presley is coming. 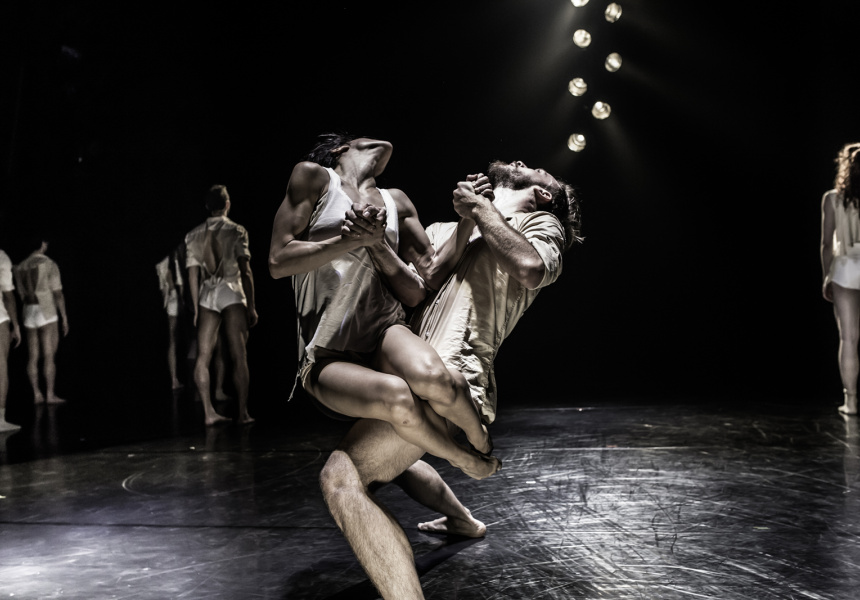 For Rami Be’er, the Holocaust is particularly close to home.

Be’er’s Hungarian parents were both Holocaust survivors who migrated to Israel in 1948. They set up Kibbutz Ga’aton (a communal settlement) in northern Israel with a group of people when they arrived and started to rebuild their lives.

Among the group was Yehudit Arnon, the founding director of the Kibbutz Contemporary Dance Company (KCDC), run by Be’er today. Arnon’s is a story of extraordinary bravery in the face of life-threatening brutality.

Like millions of other Jews, the Czech-born dancer was sent to Auschwitz in 1944 with her mother, who was sent immediately to the gas chambers. When Arnon was moved to another section of the concentration camp she tried to alleviate her fellow inmates’ sorrow by dancing for them in the bunkhouses.

After refusing to perform for the German guards she was left to die, barefoot in the snow during a bitter winter. But the human spirit has extraordinary resilience, and she survived.

“She decided if she came out alive she’d dedicate herself to dance and to educating others about dance and movement,” says Be’er from the kibbutz.

After narrowly surviving the firing squad, Arnon was freed by the Soviet army and set about doing exactly what she’d promised.

Be’er met Arnon when he was a child – she taught him movement and dance in kindergarten.

“[This kibbutz] has a special way of life, of socialism, where everybody lives together in the same place, shares what they have in an equal way and has a responsibility to each other,” explains Be’er of Kibbutz Ga’aton. “It’s still very beautiful, in nature: green trees, grass and flowers.”

Be’er grew up in an artistic household; his father was an architect and a musician, his mother a publisher. After serving his compulsory military service in 1981, Be’er joined the KCDC – which Arnon founded in 1973 – as a dancer and choreographer. Only members of the kibbutz were allowed to dance with the company, which had just eight semi-professional dancers.

Be’er became an internationally renowned chorographer. He has worked with Graz Opera Ballet (Austria), Batsheva Dance Company (Israel), Ballett Basel (Switzerland) and in 1996 took over from Arnon, who died in 2013. Today KCDC performs internationally and has 16 full-time dancers from all over the world – France, Spain, Russia, the US – but who all live and work together on the kibbutz alongside the junior company (made up of non-professional students), which performs education and family programs, an important part of the kibbutz philosophy.

“The kibbutz is a special place; the quiet it gives the dancers means they can concentrate on the dance and creativity,” he says. The company recently toured Spain, Portugal and Poland and it will fly to Sydney to perform at the Opera House for a number of firsts: KCDC’s first visit to Sydney – its first time performing in Australia in 23 years – and the first time it will dance Be’er’s new work, Horses in the Sky, outside of Israel.

It is a contemporary dance program imbued with the trauma present in so much Israeli art, but one that also offers a message of hope, all set to an eclectic and compelling soundtrack. Olafur Arnalds, Bjork, F**k Buttons, Elvis Presley and Canadian band A Silver Mount Zion (whose album and song lent the production its name) are just a handful of the artists chosen by Be’er, a musician himself.

“Horses deals with our existence, our relationship as couples. Maybe you can take some question marks [from the production] and ask about yourself, the society you live in,” says Be’er, who also designs the costumes, lighting and set.

Be’er is one of a handful of Israeli choreographers, including Ohad Naharin and Hofesh Shechter, whose work has come to Australia and is understandably influenced by Israel’s tumultuous history.

“Each artist has his own language, his own signature, but maybe a certain energy connected through place, through the conflict we live with, the tension we live with that finds expression in my work,” Be’er says.

But it’s not all dark and torturous. Be’er finds inspiration in music, poetry, architecture, animals, sunlight and his children.

“For me dance and movement are a way of communicating to people of different cultures, languages, religions. Without too much work we create a bridge between different human beings. Usually Israel is a place of conflict, so I’m happy we can also bring the other side and other activities that don’t just relate to conflict and terror.”

Hear all the music of the performance here.