The LA songwriter is worthy of love – even if he doesn’t think so. 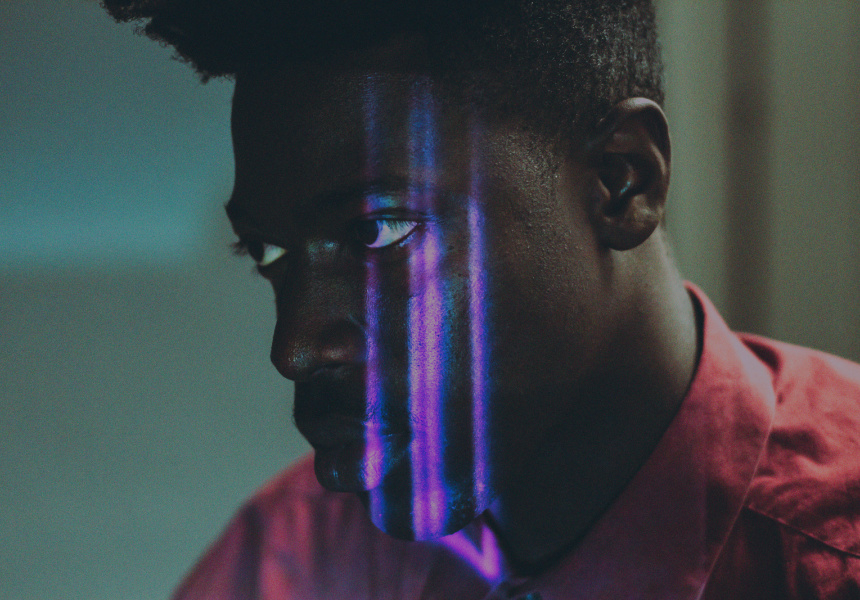 “Well, not several,” he says, correcting himself. “Just one. I lost mine.”

The 26-year-old songwriter has just knocked off a few headline shows and guest vocalist spots with James Blake and Cinematic Orchestra. Until his Australian tour in January, which includes sets at Melbourne’s Sugar Mountain and Sydney Festival, he’s mostly withdrawing from performing.

Speaking with an easy-going, Californian vocal fry, distinct from his dulcet, falsetto singing style, he admits it’s time to record “the dreaded album”.

The yet-to-be-named debut will follow his two EPs – 2014’s Mid-City Island, the vehicle for his breakthrough song, Plastic, and this year’s Lamentations.

“Out of nowhere”. Pull up any article on Sumney and you’ll find this phrase describing him. His rise is tricky to pinpoint. One minute he’s playing his first-ever live shows in 2013, the next he’s supporting Beck and Blood Orange (with whom he’ll again share the bill at Sugar Mountain).

His Instagram is populated with his new friends and admirers – Solange (his vocals appear on her new album, A Seat at the Table), Lianne La Havas, Sufjan Stevens.

But he doesn’t seem one to be swept entirely away by the distractions of LA. A creative writing grad of UCLA (who never studied music), he’s more likely mediating on what he’s making next.

“I do a lot of free writing,” he says when asked how he pushes out of his creative comfort zone.

“Just like getting a paper and a pen and writing everything that comes to mind for pages until there’s nothing left and what comes out is kind of scary,” he says, laughing. “If you’re being really open and really free, it’s kind of like demonic possession.”

He says the number one thing he learned from studying writing was “economy”.

“Saying the most with as little as possible. Talk less, say more.”

In his lyrics, particularly on tracks Worth It and Plastic, there’s recurring doubt about being worthy of love.

“Can I tell you a secret? / My wings are made of plastic,” he sings on Plastic.

“This is like a therapy session,” Sumney jokes when I press him on it.

“What deems anyone worthy of love? I think it’s worth investigating,” he says. “Or what does it take for us to love other people? What do we want from them? And what do we have to offer? I think it’s very fascinating. And I think I’m interested in exploring that from a lot of different angles.”

What attracts him to now making his first full-length release, he says, is the space to communicate “an idea – or a string of ideas – that are interconnected” over more than just five to seven songs.

So what are these ideas?

“I don’t want to tell you. It’s a secret,” he says, laughing. “It’s not, but I want to make sure it’s actually coming out before I tell people what it’s about. Maybe death. Just say it’s about death.”

“Lamentations still has a bedroom vibe across it. A lot of it was made in bedrooms. The album will be a little bit less so. And there will be somehow even more singing than before.

“I’m just curious about expanding the scope of what my music can be,” he explains. “When I started making music, my first EP was very lo-fi. I was reacting against how high-fi and computerised and polished everything is in modern music. And I wanted to make something really raw and very real, and very intimate and handmade. And I felt like making really lo-fi music was the best way to do that.

“Now I’m interested in making music that is polished and sounds like it was well done, but still intimate and emotional and human, and I feel like there’s space for that right now.”

I ask if his live performances – known for their intimacy and lush, live looping – will evolve alongside his first voyage into high fidelity.

“I think I just want to be bigger. Just have a bigger presence. And do more weird shit.”

Who nails that for him?

“I think Kimbra actually is an excellent example of a person who maximises their actual body on stage. I find her incredibly inspiring. I mean, she has a band behind her, but not a large band – but it feels like you’re watching a million people at once and I love that.”

I ask Sumney how he hooked up with his Australian friends – Melbourne’s Oscar Key Sung, for example, repeatedly shows up in his Instagram feed.

“I opened for Hiatus Kaiyote three years ago in Los Angeles when I was first starting out. And Oscar Key Sung was on that bill as well. So I’ve become pretty close friends with them,” he says.

“Kimbra’s a friend of mine, we’ve performed a few times together. I know she’s not Australian, but close enough.”

I assure him it’s fine – we claim the good Kiwis as our own.

“The good Kiwis! I love that.”

We talk about how Australians are naturally self-deprecating, while people from LA are rarely shy to talk themselves up. I ask where Sumney sits between the two camps.

“I personally don’t feel the need to talk myself up or sell myself to other people,” he says.

“Self deprecation is a big part of my ‘hashtag brand’. However, it’s incredibly true that people are always selling themselves to you in LA. It’s really quite exhausting. But, people move to LA to make it. So I get it, that’s their life. Their livelihood is being liked."

No artists float down from the sky – or “out of nowhere”. Sumney is deserving of his success as a hard-working songwriter. Now he’s not only worthy of love – he’s being flooded with it. Just listen to his output – it’s not so surprising at all.

Broadsheet is a proud media partner of Sugar Mountain festival.