Microbe & Gasoline is Michel Gondry’s most personal film and David Stratton’s top pick at the French Film Festival, on now. 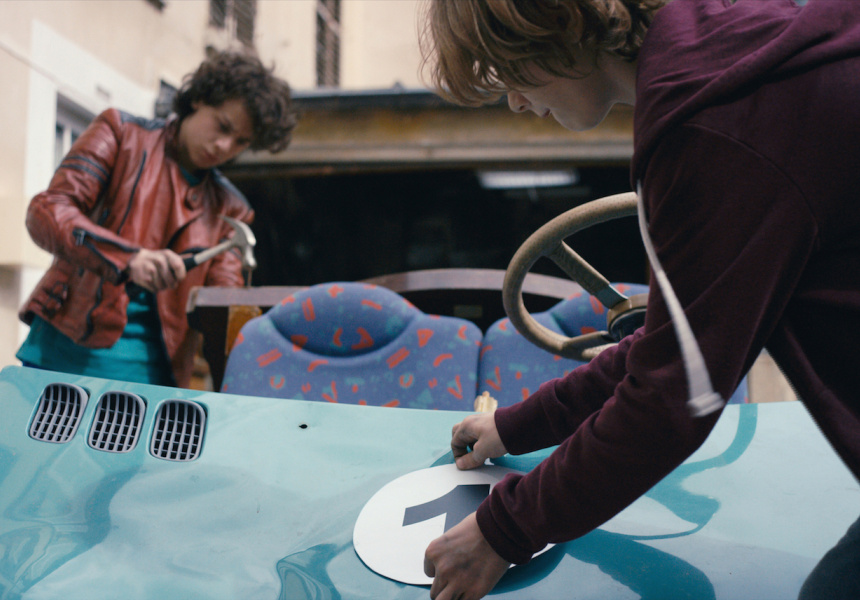 The words inventive, distinctive, surreal and whimsical are most commonly attached to the French film director Michel Gondry. But Gondry’s latest film, Microbe & Gasoline is best described as subtle. In Australia we know him best for some of his English-language films: Eternal Sunshine of the Spotless Mind, The Science of Sleep and Be Kind Rewind. And for the many music videos he’s directed since the early ’90s for Björk, Beck, Daft Punk, The White Stripes, Metronomy and Kylie Minogue among others.

One of Gondry’s hallmarks is merging fantasy and reality. And it’s present in Microbe & Gasoline, too. Its characters interact with made-up machines, stop-frame animation and cardboard landscapes. They move through the world tripping in and out of lucid dreams. His last film before Microbe & Gasoline was Mood Indigo, a love story – also in French – that has the requisite idiosyncratic elements: Audrey Tautou and Romain Duris flying through the air in a cloud car; Duris’ character inventing a Pianocktail – a piano that creates cocktails.

Mircobe & Gasoline, by contrast, is stripped right back and, for the most part, keeps its feet on the ground. Tautou advised the director to make a more personal, contained film after the large-scale production of Mood Indigo. (Tautou herself takes a pleasingly against-type turn in the film as Mircrobe’s caring, bohemian mother suffering from depression.)

The film is set in Versailles, the city on the outskirts of Paris where Gondry grew up. The character of Daniel – nicknamed Microbe, because he’s small for a 14-year-old boy – is based on Gondry’s own childhood memories. (Daniel’s family home in the movie is actually the house where Gondry’s grandparents lived; next door to his own childhood home.) And the streetwise, inventive Théo – known as Gasoline because he’s always tinkering with (and smelling of) motors – is an amalgamation of people Gondry knew as a child.

Both boys are unconventional. Daniel, a talented illustrator, is shy and unsure about being different. Théo, a little older, is proudly so. They become friends instantly when Théo joins school halfway through the year and they soon embark on a summer adventure on the roads of France. It’s a simple premise that allows for many moments of humour – scripted and physical – and poignancy to shine through.

The boys cobble together a DIY mobile home for their trip. Built from a lawnmower engine and a few planks to resemble a shabby-chic garden shed on wheels (complete with window flower box), it’s textbook Gondry. It looks (and drives) like – as the director has described it – a cross between something out of Mad Max and Wacky Races in slow-mo.

“It’s both an easy and a complex story, with many different elements in it,” says Denavit-Feller. By channeling his inner teenager Gondry has made a film that feels very grown up. It’s an artful, incisive study of two likeable nonconformists. Anyone who’s ever been a teenage boy – about half of us – will relate, as will anyone who’s ever felt out of step with the rest of the world – that’s most of us.

The Alliance Française French Film Festival 2016 runs in Sydney until March 24 and in Parramatta from April 7 to 10. Visit affrenchfilmfestival.org for showing times.