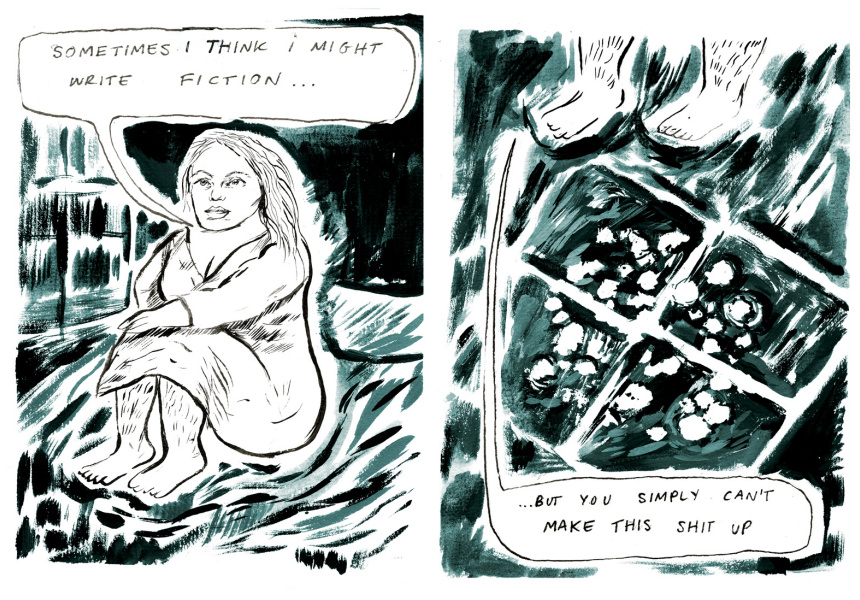 Photography: Courtesy of Glom Press
1/8
by Will Cox
Share

Between 1813 and 1827 serial killer Gesche Gottfried poisoned 15 people with arsenic, including members of her own family. When asked why, she merely said, “I’ll have to think about that.”

Grills thinks when our society looks at women who commit crimes, we see things as too black and white, and there’s a huge grey area we need to explore.

“Women aren’t normally allowed to express deviant behaviours,” Grills says. “[We hear] more stories of women in history who’ve done great things now, and that’s great, but I have a lot of problems with the [perceived hard line] between women who are good and women who are bad.”

Grills’s book isn’t exactly a comedy. She doesn’t lose sight of the seriousness of the crimes it describes, and doesn’t make excuses for the women who commit them. But she does attempt to reclaim their humanity. It’s a pitch-black and beautifully written reflection on society’s reappraisal of “evil” women.

The book also forms part of a wider, more sympathetic look at women driven to do horrible things. Grills refers to a recent controversial T-shirt design that features images of convicted murderer Aileen Wuornos with the slogan “I’m with her”.

“There’s been a revision of her narrative lately,” says Grills of Wuornos. “That T-shirt is a joke, but she was a queer woman who was a sex worker, who was abused. It doesn’t excuse what she did, but people have a lot more sympathy for her now. People understand her.”

Grills herself appears in the comic to introduce each story, sitting in a robe on her bed. “Sometimes I think I might write fiction,” she says in the book. “But you simply can’t make this shit up.”

For Grills, the heavy visuals of a comic make it easier to get into a character’s head. “It’s a really empathetic medium,” she says.

We’re pleased to present an excerpt from Grills’s dark, bitter and murderous book in the gallery above.

Sexy Female Murderesses is available in bookstores and online here.