In the past four years, Sydney electronic duo, Flight Facilities, has released just eight singles. Hugo Gruzman and James Lyell tell Broadsheet why now is the time for their debut album. And to make things more interesting, we put them in Melbourne's Escape Room for the interview. 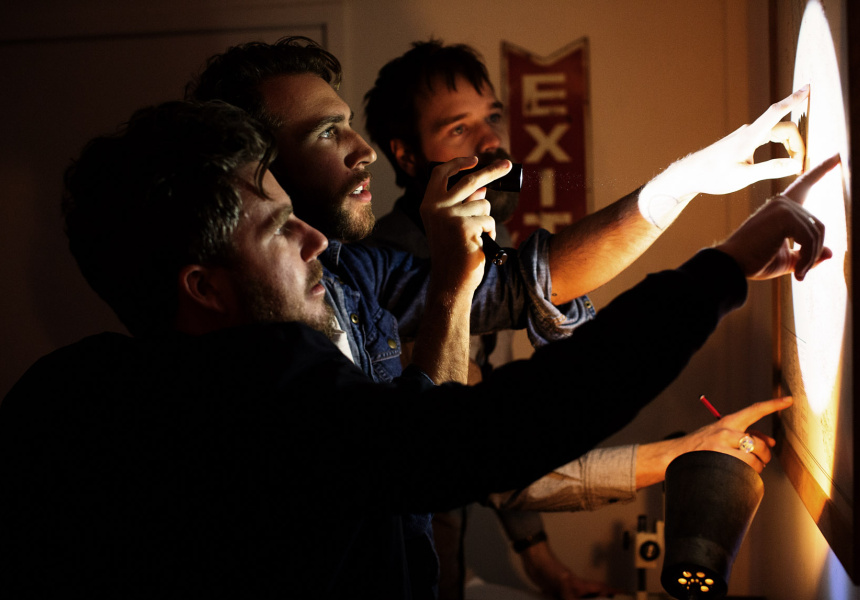 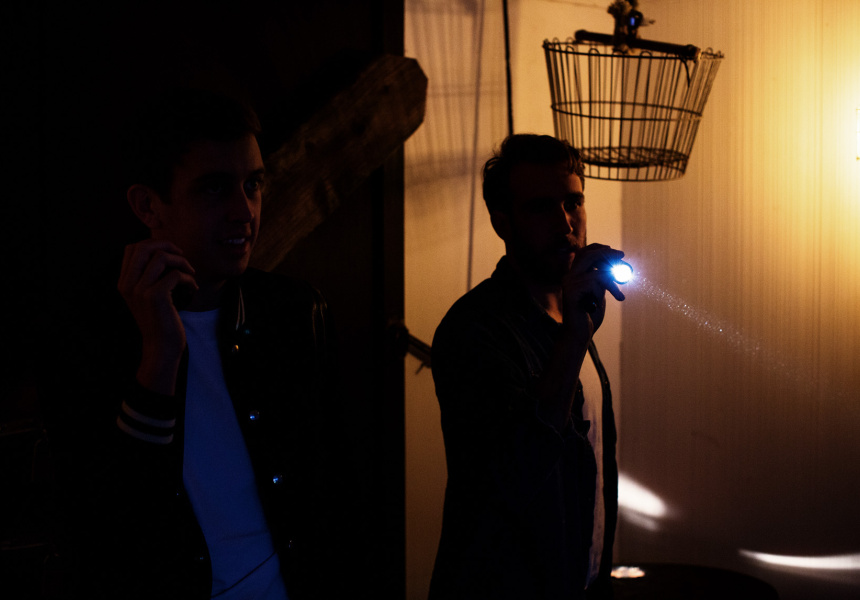 Melbourne's puzzle solving Escape Room, one of the city's more alternate attractions, looks like the top of an old mine shaft. It’s a lovely spring Sunday afternoon but inside it’s dark, dusty and dry. There’s a Johnny Cash song playing on an old wireless in one corner and a birdcage hanging from the roof. The noise bounces off the corrugated iron walls.

Flight Facilities' Hugo Gruzman and Jimmy Lyell enter the room, the door is locked and the timer starts. Gruzman picks up a note from the desk and reads it aloud to Lyell. “There’s been a collapse in the mineshaft,” he says, and tells Lyell that they have 70 minutes to find a path out from five levels below the surface. For a minute they pace around the room separately, looking at the maps and stones and clues before they come together again by the desk. “OK,” says Gruzman. “I’m guessing we have to go from place to place and get the keys, which open the locks.”

Sydney duo Flight Facilities met me outside the Escape Room at 2pm. Rather than doing the interview in a restaurant or pub, we decided that The Escape Room would give Broadsheet readers a better insight into the pair’s working dynamic.

Flight Facilities rose to fame with its debut single Crave You in 2010 and has released a hit record each summer since. Along with finding its way to number 17 in Triple J’s Hottest 100 in 2012 with Clair De Lune, the band landed shows at countless Australian music festivals and impressively, a slot at Coachella in Palm Springs early this year. Until now, it’s played the supply and demand game incredibly well, releasing a very limited number of very popular songs (eight singles over four years) – with no album to be seen. Now, a debut album, Down to Earth, is officially on its way via record label of the moment, Future Classic. Which leaves us wondering – why change tack now?

The pair is strategic and controlled in the Escape Room, and it’s these qualities that come out in the band’s production. The band has a unique aptitude for both business and timing, and to them it feels like now is the right time to expand beyond the realm of pop singles.

“It’s about showing people another side to our tastes, and making an extended record designed to be listened to from start to finish,” says Lyell.

“We think a lot of albums, these days, are two or three singles hidden amongst a sea of filler, mainly because an album pushes artists to the next level in terms of promotional potential and sales ability.”

After about 20 minutes in the room, Gruzman and Lyell are progressing well through the clues. They work together naturally and methodically, splitting apart to gather information and then coming together to confer. They breeze through the first section in which they’re required to find a note underneath some sand in a box. From there, Gruzman picks up a pair of binoculars (after being prompted) and looks for clues through a small slit in the window that looks out onto Yarra Street. “I’ve got something, but it’s quite hard to read,” he says, quite excited, after a minute or more. “All unauthorised vehicles will be towed away,” he says, and the pair burst out laughing.

“The music industry is still in the middle of a big change from the album to singles culture,” says Gruzman. “The old format still plays a huge part in how music is marketed, and labels and publishers still see the need for LPs to properly market an artist. This reasoning certainly played its part in our decision to take the leap.”

After just 30 minutes, Guzman and Lyell open the final lock in The Escape Room with a roar. Once they are out the attraction’s owners, Ali Cheetham and Owen Spear come in for a debrief. According to Cheetham and Spear, they were an impressive pairing, who were good at breaking off separately and coming together at crucial times. “You get some groups who are really serious,” says Cheetham. “These guys are a party group, they like to talk and laugh and have fun while they work through it.”

Safely out on the street, we continue our conversation on the release strategy of Flight Facilities. “We’ve grown up in a culture where singles are the songs that are remembered, and bands achieved global success on the back of a one-hit wonder,” says Lyell, on how they’ve released in the past, and their decision to go long play. “So why not make every song a single? Treat it with all the care and time you would an album. Today, in everything, we have so much choice that sometimes it’s better to limit everyone’s options.” Whether this is true or not, it’s clear that what listeners are looking forward to most is hearing Flight Facilities play the long game.

Down to Earth is out now.