The underground stars debunk the myth that there's nowhere to play in Sydney. 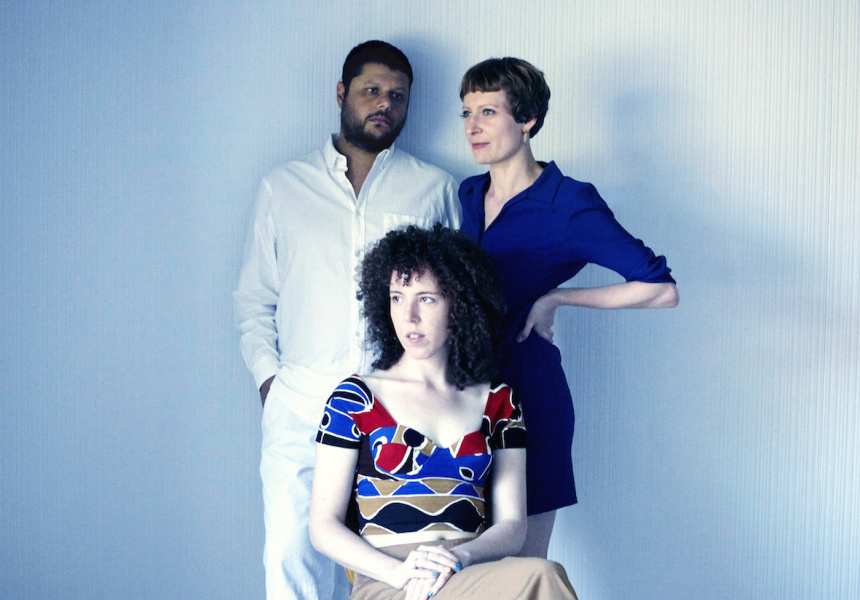 It’s been four years since Holy Balm released its debut album It’s You through champions of the Sydney underground scene, R.I.P Society. This week the Sydney-based trio releases its second album, Activity, through (equally independent) label Chapter Music, home to Dick Diver, No Zu and Wagons, among many others. For Emma Ramsay, Jonathan Hochman and Anna John, the move marks a subtle shift in their music.

Though still a firm fixture of the Sydney DIY scene, Holy Balm’s new singles, Fashion and Clandestine, sound smoother and more sophisticated than their earlier tracks; just as interesting, but eminently more danceable, hummable. Sure, you can still imagine the band sounding great at a warehouse gig, but you can also see them working wonders with a prime-time festival slot. As John says, “For a jammy-psych-dance-band who used to play out of amps, writing something like Fashion was like taking a risk. But it worked! I think we are growing up, but doing it our own way.”

Broadsheet: What can you tell us about Activity? Was there a particular sound or atmosphere you aimed to capture with it?
Anna John: I can't remember consciously thinking about it as we were writing, but I think our exposure to dance and electronic music has increased since we wrote our debut album, It's You, which came out of a long gestation period in the DIY scene. It has more hallmarks of post-punk and that kind of thing. Since working on the material for Activity, Emma hasn’t been playing live percussion, and [has] focused much more on [her] vocals and their affectations and the way her voice as an instrument relates to the synth stuff Yoni [Hochman] and I do. I have played less “keyboard sounds” – like strings and organ sounds – and opted for more textural, weird stuff that I think comes out of my exposure to more electronic music. The atmosphere of a lot of the tunes also breaks away a bit from “genre” sound, I think, which is exciting.

BS: What creative influences do the three of you come together on?
AJ: ’80s house from Chicago and Detroit, Prince, local stuff, Japanese electronic-pop has been a new entry – offshoot records from YMO members like Yukihiro Takahashi.

BS: Your music doesn't fit into any one box – but is there any particular music or creative scene in Sydney you feel part of?
ER: There are many folk – seen and unseen – who support us in many ways. There is a prolific creative community around labels like R.I.P Society and Paradise Daily. The Goodgod community (people like Jimmy [Sing] and Hana [Shimada] in particular), which extends to friends such as Marty Doyle.

Radio-wise, Ears Have Ears and Makeshift on FBi and 2SER have given us exposure to local audiences, which we have always been grateful for.

Earlier on, Gaylordz was a night that we would always have fun playing at the Red Rattler.

Repressed Records is a hub for like-minded musical folk in Sydney we feel a part of. Then there is the NOW Now community and gigs that Del Lumanta puts on, Double Vision.

A more low-key venue for experimental gigs is Life Groove Cafe. As our music and live performances have evolved, we've been made to feel at home [anywhere from] a DIY venue such as Blackwire Records to the smokiest club. I think there is a shared appreciation for a distinct kind of musicality at work. And then that is bolstered with love and friendships with each other, sharing music, performing, keeping the wheels turning.

I guess that sits alongside us as people, participating in a stack of music and art and experimental communities ourselves for over 10 years.

BS: Do you have a particular favourite venue you’ve played?
AJ: Spaces come and go here, but in Sydney's defence we always find a way. I have always enjoyed playing warehouse shows but they're few and far between these days. What comes close to that is a good gig at Black Wire. I think people enjoy it because it is really relaxed, people are respectful there and there are no extra layers – security guards and the like.

I miss Goodgod as it was. Newtown Social Club, where we are launching the record, is a fave as well, they have done a wonderful job. And the new venue at the Portugal Madeira Club! No shortage of venues in Sydney – don't believe the myth!

Holy Balm will perform at Newtown Social Club on Saturday September 24, alongside Enderie, Phone and Sex Havers DJ's. Tickets are $12 and can be purchased here.

Buy the album on Digital here and vinyl here.