Lisa “Suckdog” Carver is best known for extreme on-stage antics and her confessional writing style. During her full – and at times traumatic – life and career, she’s proven existence is the best muse. 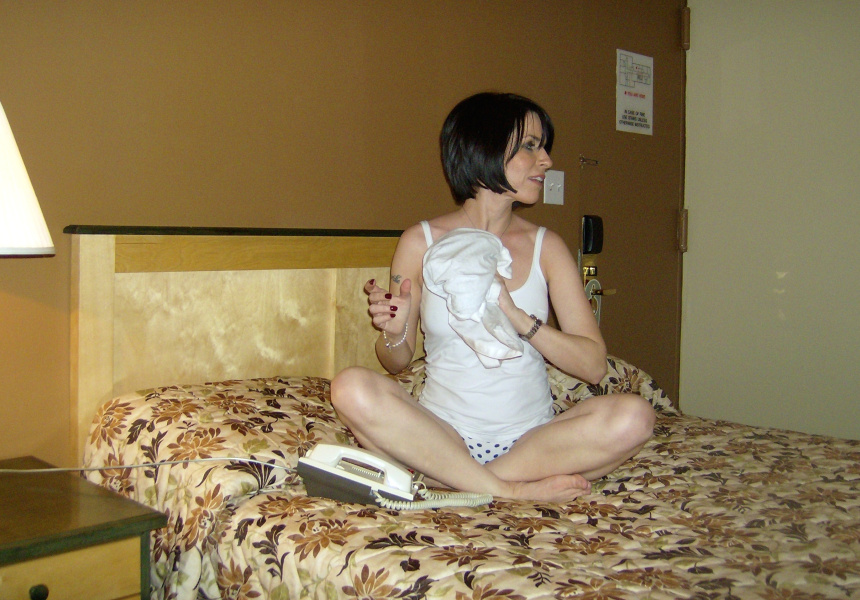 During our conversation Lisa “Suckdog” Carver casually mentions some very confronting things (“I liked those German people who cut off their body parts and hung themselves from hooks and called it art”). She’s upfront about her abusive childhood, and has been known to talk openly about her time as a sex worker. The performance artist, writer, zine-founder, musician, exploder of expectations, “trash princess” and professional antagonist has made a career out of expressing that which most people won’t even consider. Carver was “over-sharing” and finding a community to do it with before Lena Dunham and Tavi Gevinson were born.

Carver joined performance-art band Psychodrama when she was 18 (she’s 48 now). In 1988 she and her then-husband, Jean-Louis Costes, started a noise-music-opera band called Suckdog. Its shows involved wrestling, rape simulations, on-stage urinating and audience participation that verged on, and often tipped into, violence.

She started the underground personal zine Rollerderby in 1989 (the last edition was published in 1999), and editions were collated into a book in 1996. The zine reported from the fringe, covering subcultures, outsiders, sexuality and feminism. Hustler described Rollerderby as “berserk and brilliant” with “astonishing artwork and volcanic sexuality".

Her writing career includes a memoir, Drugs Are Nice; a book about Yoko Ono; Dancing Queen: a Lusty Look at the American Dream; novels; short fiction and a book of the artworks she made while trying to recover lost memories of being molested and pimped out by her father.

We chat to Carver ahead of her appearance at the State Library of Victoria as part of TINAtalks on the topic of Writing While Female – Subverting Expectations on Friday July 29.

Broadsheet: Do you consider yourself an outsider?
Lisa Carver: I never wanted to be mainstream, so I can’t feel like “they” kicked me out or wouldn’t let me in. I enjoy people who have a confrontational, disgusting piece of art they put out there, and shake things up.

BS: How do you feel about the term “underground” to describe your work? Could performance and writing like yours ever be mainstream?
LC: I like it. I always liked little tiny things that lived free and escaped notice. That’s why I was interested in Psychodrama, I guess, because they were so unknown. They could do whatever they wanted and not have to worry about going to jail.

Now I don’t think it’s possible to be underground because we’re so looked at. There are cameras on every street. I can’t imagine doing the things that I did with Psychodrama now. I just can’t even imagine that kind of freedom.

BS: Why is underground art important?
LC: It’s so difficult to do something mainstream on one of those topics [politics, feminism, abuse] because everybody gets upset. There was always such a feeling in underground of “we found each other” and just total acceptance, even if you’re horrifying, if you’re telling the truth about something you’ve had to keep to yourself, it was welcomed.

BS: You’ve said you were always looking for more extreme things to do. What drove you to look for expressions that were more extreme than the last?
LC: It feels right, it feels good. I felt like I was always doing something. I might hate what I’m doing, or what the people around me are doing, it’s scary, but at least I know I’m not doing something mediocre. That was my big fear. I was always interested in seeing what happens next.

I was performing a lot with my husband, Costas, and after we broke up, and I had a new boyfriend, we still wanted to tour together. When we got on stage he would attack me, because it was part of the show, and he would rape me and beat me in the show, which was supposed to happen, but he was really taking it out on me and bashing my head sometimes. On one hand I admired it because I like mixing real feelings [with performance] on the stage, especially when it comes to something that’s going too far. But on the other hand I didn’t want to have brain damage. So I had those two conflicting feelings and after that I quit.

BS: That’s intense.
LC: It wasn’t that surprising. Things like that happened a lot. I was doing drugs in those days and drinking too much and so were most of the people who would agree to be in this type of show. None of us were good singers or dancers or actors, and yet here we were going from town to town riding Greyhound buses, losing a tonne of money to create this thing every night. Everyone was having sex with everyone and getting hurt feelings, and everybody was maybe a little mentally ill and drinking too much and tired and sore and so it would come out in the show. And we loved it. Because we felt like this was a “happening”. And we all believed in it. Even the person objecting still believed this was an honourable thing we were doing.

BS: What do you think made Rollerderby so successful?
LC: It was really good! [laughs]. It just felt like it was your crazy best friends hanging out and having a sleepover and you got to hear all these juicy details about everything. And the people who wrote for the magazine would say anything. Because we knew our parents were never going to see it. We knew there was no chance it was ever going to be in Barnes & Noble [bookstore]. And then of course, it ended up in Barnes & Noble [laughs]. Everybody felt free, everybody felt like it was just us girls and guys and it was just a good time.

BS: How did Rollerderby inform your books and the writing career you then made for yourself?
LC: When I saw how people responded to Rollerderby I realised you can say anything. You can just write to people like you would talk to them, like they’re your friend, and they’re not going to think badly of you. In fact, they’ve probably done the same thing. And that doesn’t usually make it into books. So I think making Rollerderby let me know all the stuff I like that happens in my life, or that I feel upset about, I can just say it. No problem.

Lisa Carver’s new book of short fiction is called The Jaywalker. She will appear at The State Library of Victoria as part of YWCA’s (World Young Women’s Christian Association) TINAtalks on the topic of Writing While Female – Subverting Expectations Friday July 29 at 6.30pm. Also speaking on the night are Michelle Law, Adalita and Dee Fidge. Tickets are available here. Proceeds from the event’s ticket sales will go to YWCA.

Carver will also perform as Suckdog (along with her 14-year-old daughter Sadie Carver) in Melbourne, Adelaide, Brisbane and Sydney.