The Koalas of Bluesfest

A koala strolling around the grounds of Bluesfest isn’t an uncommon sight, but the local population is facing extinction. Here’s how you can help. 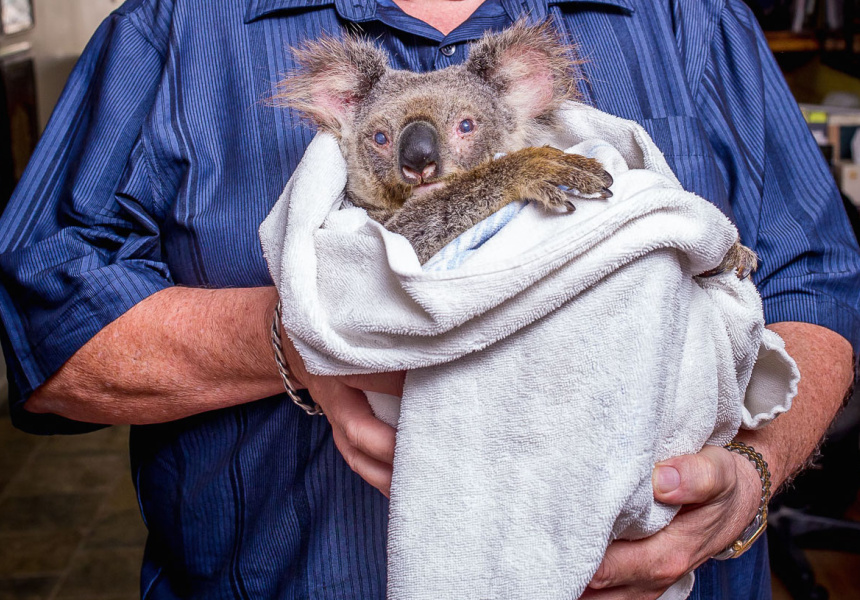 Festival Director Peter Noble with Mavis and the Bluesfest team.

If you’re heading to Bluesfest, it’s worth knowing a little more about the locals.

Making their home in 120 hectares of Byron Bay hinterland, the koalas of Bluesfest are as much a part of the festival as the music. They’ve even been named after artists who’ve performed there over the past 25 years.

As across the rest of the country, the Byron Bay koalas face a serious health crisis. The population is affected by chlamydia, which leaves them unable to forage for food or care for their young.

Five years ago the festival decided it needed to do more to help the animals. With proceeds from the sale of Bluefest tickets, festival director Peter Noble established a koala-monitoring program, working with researchers from the University of Queensland.

“Before, we had to send sick koalas to the vet,” Noble explains. “There was a 99 per cent chance they’d be put down.”

Since the start of the program, all of the sick koalas found have been returned to health.

One such koala is Mavis. She takes her name from soul diva Mavis Staples. Last year Mavis was found almost blind – vulnerable to predators – by UQ professor Sean Fitzgibbon.

After a few weeks of treatment at Australia Zoo, she was reintroduced into the wild.

“We’re just trying to do the right thing,” Noble explains of the impetus behind starting the program. “If you ask me, I’ll tell you about it, but it’s not something we really publicise.”

When you’re at Bluesfest, it’s important to remember that you’re on these creatures’ home turf. Keeping a couple of simple tips in mind will ensure everyone has a great festival, including those in the trees.

– It should go without saying, but if you see a koala, no matter how cute they look, don't touch it.

– If you find a koala that looks unwell – particularly if their eyes look red and crusty – tell a staff member. There will be koala experts from University of Queensland onsite for the entire festival to ensure the wellbeing of our furry friends.