The Sydneysider, appointed after an international search, was chosen for her experience, creative insight and deep passion for the city. For Olivia Ansell, Sydney Festival is intrinsically linked to a Sydney summer. “I’m a Sydney girl and [January is] shaped by the Sydney Festival. For the past 20 summers I can remember where I was, what I was watching and who the director was at any given moment,” she tells Broadsheet.

It seems appropriate then that Ansell has been announced as the next artistic director of Sydney Festival, replacing current director Wesley Enoch who will present his fifth and final festival from January 6 to 26 2021.

“I remember seeing Nederlands Dans Theatre when Leo Schofield was director [1998–2001]; then he brought [French prima ballerina] Sylvie Guillem to Sydney to dance Bolero for the Sydney Olympic Arts Festival and I remember thinking, ‘What would it take to be Leo Schofield one day?’”

Ansell was selected following an international search and chosen for her breadth of experience, creative insight and deep passion for Sydney. She has two decades of experience working as a director, choreographer and performing artist with organisations including the Sydney Opera House (where she has been head of contemporary performance for the past four years), artistic director of Sydney Comedy Festival, co-executive producer of Hidden Sydney, executive producer of the indie contemporary dance-theatre group Shaun Parker & Company, and curator of the independent dance festival Short+Sweet Dance.

Although Ansell’s three-festival tenure officially begins in November, she already has a raft of ideas, and top of her list is to reinvigorate Sydney’s live music and art scene.

“Sydney has been impacted in the past couple of years by the lockout laws, and now from lockdown. I’m so passionate about Sydney’s live music and art scene, I want to work, not just with the cultural [sector], but the tourism sector to reinvigorate live performance and entertainment across the city of Sydney and western Sydney,” she says.

Ansell has particularly enjoyed Enoch’s focus on stories by First Nations artists and hopes to take that further.

“Wesley has the incredible legacy of his commitment to new Australian work and First Nations’ work like Anthem and Black Ties, and culturally diverse works like Counting and Cracking. I want to commission new Australian stories and shine a light on Sydney stories told through the lens of our independent artists and small-medium sector with a special New South Wales focus.”

Ansell’s appointment is a rare piece of good news in an industry that is reeling from forced closures, unprecedented loss of income and an uncertain future as a result of Covid-19.

Although galleries are starting to reopen, it is not yet clear when live music, theatre and the performing arts in general will recommence. And with overseas travel still prohibited, no international artists can travel to Australia and viewing international offerings first-hand – a major job perk of the festival director – is impossible.

But there are also silver linings. “It’s a wonderful opportunity to support our local artists and get behind new Australian stories and commissions,” Ansell observes of the festival, which for its next instalment will be entirely Australian made. “There are enough stories in Australia to present 10 festivals. But the wonderful thing about international collaborations is that diversity, so hopefully by 2022 we do see that international mobility return. But we need to be prepared that it might not.”

Ansell anticipates the current global pandemic will inspire broader thinking on a creative level. “Even though the world couldn’t feel more separated, we’re more together than ever because we’re all experiencing the same challenges. I think it evokes humility as we come to grips with what we’re in, and I think a lot of new work that doesn’t have the boundary of borders will emerge from this.”

Ansell says she will be looking to curate work with broad appeal.

“Sydney is a big city … we have so many festivals and cultural institutions with their own curatorial programs that [artistic] real estate is always at a premium – which doesn’t come as a surprise to a Sydneysider!” 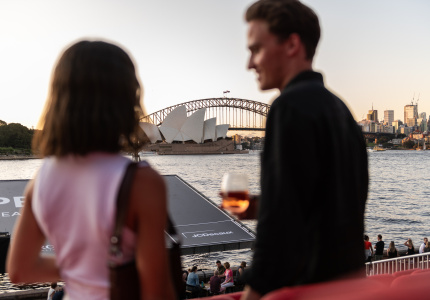