An Audience with Ira Glass

The host of This American Life on trying new things, the genius of Beyoncé, and bringing a dance show to Australia. 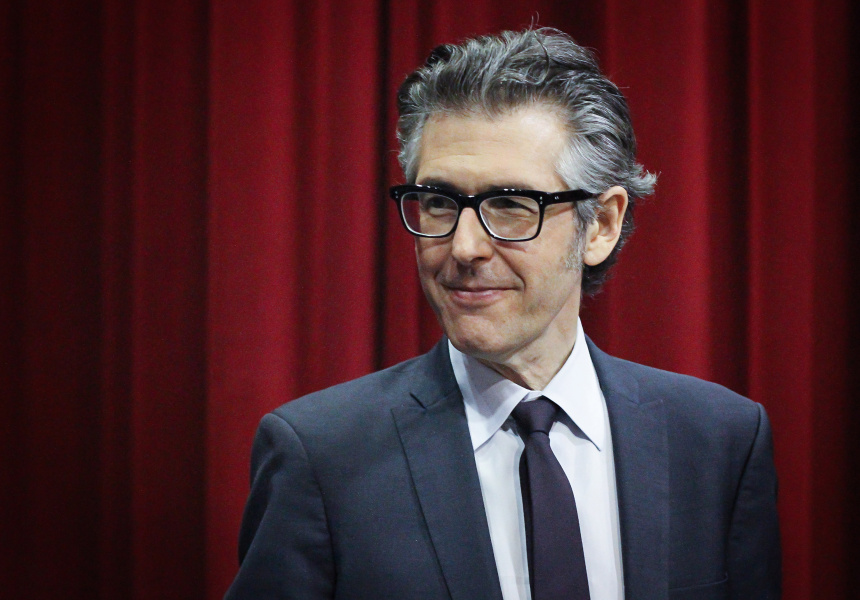 Through an ability to give headphone-wearing commuters the feeling they’re part of a small family gathered around the wireless, Ira Glass has become one of the most influential broadcasters in the English-speaking world.

When it’s not being beaten by its sister program, Serial, This American Life is the most downloaded podcast in America. Its worldwide audience stretches into the millions. It’s tempting to complicate things, point to factors beyond the folksy, homespun charm that Glass and his team cast with nothing but the magic of a good story. But listening as This American Life finds a new way to tell a story about Disneyland, or gives space to a calmly devastating tale of genital mutilation – it is that straightforward.

Most of the time the show’s presence is a quiet one. After 20 years, new episodes don’t have an impact on office conversations the same way the things we’re watching on TV do. Then, occasionally, you’re reminded just how big its presence can be. When This American Life left its radio distribution company to go fully independent in 2014, the New York Times described it, straight-faced, as, “The equivalent of Radiohead’s releasing its own album In Rainbows, or Louis C K selling his own stand-up special – except all the time, for every show.”

At that time, Glass left others to wring their hands over how he was or wasn’t disrupting the public-radio firmament. He gave a couple of interviews, but mostly he was too busy making his program, producing a film, helping his team launch an experimental, single-story podcast series and fronting a song and dance show.

That last project because, well, why not? Talking to Glass about Three Acts, Two Dancers, One Radio Host, the stage show he’s bringing to Australia this winter, its beginnings really do seem that glib. After seeing dancers Monica Bill Barnes and Anna Bass in 2011, Glass was struck by how much their sensibility seemed to match what he tried to do on radio. They began speaking, which led to a collaboration on This American Life’s live cinema episode, then in 2013, a full show. Glass might call it their “weird little backyard project”, but three years on, they’re still performing it, and he’s still describing it as one of the best things he’s ever made.

“It was entirely us thinking about what would be amusing to try, and running at it,” Glass says when asked how much preparation and thought went into his experiment with a totally new medium. “There’s no science to it at all, it’s just, ‘What would be fun to do next?’”

It turns out this approach informs most of This American Life’s new projects. “When we started Serial, it was like, ‘Oh, that would be fun to try’. I did an animated cover of the New Yorker magazine a couple of months ago, we have a new film that came out at South By SouthWest that Mike Birbiglia wrote … we always have these little things going, just because they seem fun.”

The process he describes belies a daunting work ethic. Glass and his team’s commitment to telling stories, and the time they put into it, is legendary. Much of the inspiration for Three Acts came from material originally found for the radio show.

“One of my favourite things we tried was based on a radio piece about the driver of an airport shuttle,” Glass says. “This man at Boston airport had been driving a 15-minute loop from the terminal to the parking lot for his entire working life. Over 30 years, you could count the number of days he’d worked and the number of loops he’d made. On the day he retired, his nephew rode with him and recorded the very last loop. All his friends who worked there were coming over the radio, talking to him, razzing him and being very sweet about it as he’s making his last loop. So he’s driving this circle and talking to his nephew and his friends are razzing him over the radio, and Monica and Anna created a dance they performed in a continuous circle. As they dance, there’s a huge confetti storm, with fans blowing confetti around so they’re totally drenched in it, while over the speakers he’s driving through the snow in a circle, they’re dancing in circles on stage and it’s really beautiful and melancholic … really something to see,” Glass says quietly. “And we did it once. We decided it couldn’t stay because it repeats feelings that happen in a different part of the show. On its own, it was a strong piece, but it wasn’t different enough to the things around it. In the context of the show it didn’t make any sense, or move us forward.”

For Glass, this ability to make completely unemotional, pragmatic decisions for the benefit of a creative work is a huge part of what helps it succeed.

“Having the will to throw out stuff, and be like, ‘Okay, we’ve failed, let’s go back to the drawing board’ – in my experience that’s what it takes, in journalism or in anything else. It’s only through a huge act of will do things get good.

Anyone who’s heard him speak about his work will know that Glass is only too willing to use himself as evidence of how much time and effort goes into making good work.

“There are videos of me online playing clips of myself from my sixth or seventh year of doing radio, and they’re terrible. They are not good,” he says. “This wasn’t my first or second year on radio, this was my seventh. I really had to think about what makes something good or bad, and the process you go through to make something good. For me, that act of being bad, and punching my way out until I was good, was such a hard emotional thing to do that I’m like anybody who was in a war and won – I always feel comfortable going back to it. If anything, I dwell on it too much, like some tired old veteran you don’t want to keep hearing tell stories anymore."

“I have sympathy for anybody who is struggling to make something special,” he continues. “I have weeks here where I am working my very, very hardest to make something good – we all are – I have 70-hour weeks where every moment I’m awake I’m at work and we’re re-writing and re-writing and throwing stuff out. It’s still really hard to make the [radio] show good.”

Unsurprisingly, Glass’s devotion to his work takes a toll on his ability to keep up with other media.

“I do [keep up] to some degree, but I have so little time I do a terrible job of it,” he says. “Just last night I watched Lemonade, the Beyoncé release. It was just spectacular. The aesthetic she’s invented for herself is just so beautiful, it’s just such a weird combination of old-school documentary and art photography and music video and something that’s just its own thing, and it’s so exciting to see someone do something so ambitious, so perfectly well. I came away from watching that feeling totally charged up, and wanting to tackle harder stuff.”

Needless to say, for Ira Glass, the end goal of “tackle harder stuff” is to simply keep doing it.

“I don’t need what I do to be the most popular thing in America, or the most downloaded thing in the world,” he says. “That’s not my ambition in any way. I respect people who want that, but that’s not what I’m interested in. What I’m interested in is doing stuff that I personally find interesting. We don’t do audience research into what will work and what won’t. What we do is make what we like, and assume that we’re normal, and if we like it, other people will like it. And I think that’s good enough. If you have a job that you can stand, you’re so far ahead of the game. You know what I mean?” he laughs. “I feel like that’s my goal. To make something I like. That’s enough.”