Edinburgh’s foremost (well, only) DIY hip-hop outfit, Young Fathers, is about to play the Listen Out festival. We talk to G Hastings, one-third of the band, about vintage synthesisers, being outsiders and going it alone. 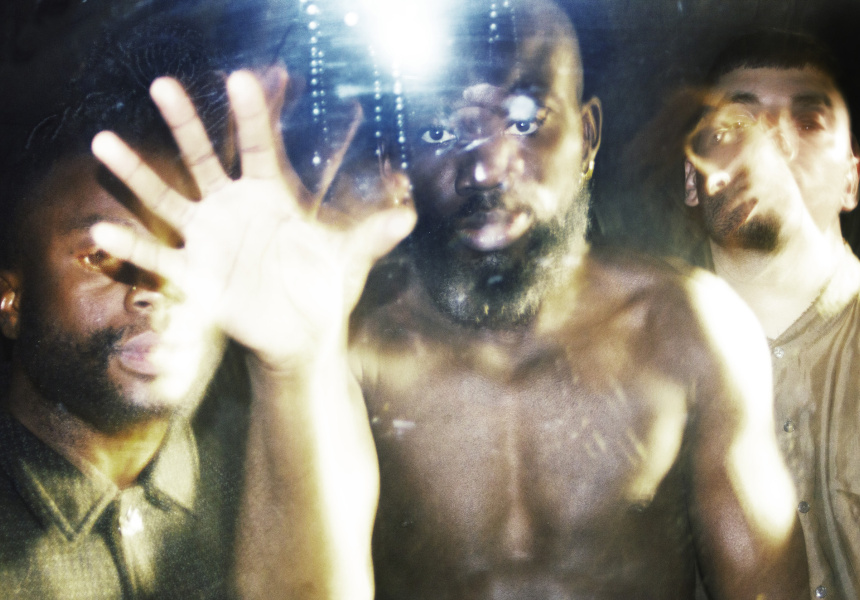 When Young Fathers takes to the stage, none of its members quite knows what’s going to happen. Configuration: Three MCs and a live drummer backing them up. Graham “G” Hastings takes prime position alongside fellow founding members, Kayus Bankole and Alloysious Massaquoi. Hastings struggles valiantly with a 1969 EMS synthesizer (with dials marked “attack”, “pop sensibility” and “aural assault”). He has no idea how to control it. It’s better that way.

“I just play with it,” Hastings says. “There’s nothing really controllable about it. I don’t know what it’s going to do every show. We’ve blown a few amplifiers with it. If you turn it up, it’s dangerous. But it’s proper, real analogue warm.”

Young Fathers is a kind of controlled chaos, and Hastings is completely comfortable with that. Six years ago, the members met at an under-16s hip-hop night in their hometown of Edinburgh and began recording using a karaoke machine and some budget sequencing software. The past three years have been huge for them, including recording and releasing two EPs, (Tape One and Tape Two), and signing to labels Big Dada and Anticon. This year, the group added a debut album to this string of successes, Dead, which was subsequently nominated for the Mercury Prize.

The new album sees the band remain firmly in the “hard-to-categorise” category, which is exactly where it likes to be. It’s a fusion of coarse beats, soul vocals, off-kilter synth hooks and socially conscious rapping. It’s not simple, and it’s not easy listening, but it is unique and substantial and it’s got an undeniable pop sensibility. Get Up – easily the most accessible, hook-driven piece on the album – is built on a nerve-jangling synth line, and yet the vocals implore you to, “do the right thing” which is, of course, party.

“One reason we bonded in the first place is because we have gut instincts. If we all like it, we get on with it,” says Hastings. “[With Tape One], we had something we really wanted to hit people over the head with. We wanted to push it.” The band got rid of people around them who didn’t fit in with what they wanted to do. “We were fed up of being told to just make the music and have someone else do everything else. All the small things matter. Videos matter. Photos matter. Artwork matters.”

It’s been a relentless schedule since then, but a self-driven one. They have made no attempts to blunt their edges and fit into a genre or a scene. Tellingly, they’re from Edinburgh. Outside of perhaps The Proclaimers, bands just don’t come from Edinburgh.

I put it to Hastings that being a DIY hip-hop outfit from Edinburgh makes them perpetual outsiders. “Edinburgh doesn’t really have any insiders,” Hastings replies, “so I don’t know if you can call us outsiders.

“We don’t see the sense of sticking to our lane,” says Hastings. “All the people who are interested in strange underground stuff, we don’t want to just appeal to them. We want to appeal to everybody.”

Young Fathers plays the Listen Out on Saturday September 27 at Centennial Park. Its new album, Dead, is out now.