If the Sun Could Sing

Artist and musician David Haines spends his time in the wild recording sounds the rest of us can’t even hear. 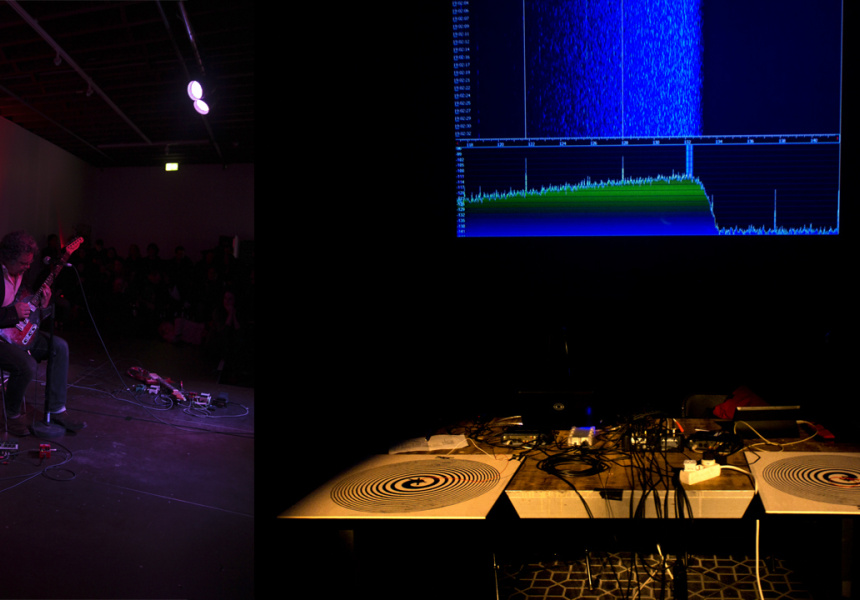 Most people would look at you strangely if you asked them to describe the noise that rocks make, or the sound of the sun’s rays.

Not David Haines. For him, the answers are easy: sizzling bacon (that’s the sun) and an energetic, wild, near-technological sound for certain rocks.

An artist, astrophysicist, geologist, environmentalist and musician, with a hint of mad scientist, Haines has spent 20 years in the field with his partner and fellow artist, Joyce Hinterding, collecting sounds from the natural world. Most of them are often outside the range of human hearing.

“We find ways to make what you wouldn’t normally hear, audible, and often that comes through being able to detect things out of the range of hearing,” says Haines. “We use all kinds of strange devices to do that.”

Their work is “exhibited” and acclaimed internationally and locally. A recent exhibition at the MCA, called Energies, attracted more than 120,000 people. Much of it is sourced in NSW in the quiet of the Blue Mountains.

Their most recent commission, by Campbelltown Arts Centre, builds on their body of work. They will work with renowned Kiwi musician and visual artist Michael Morley on Black Canyons. This one-off performance invites the audience to sit in the round and surrender their senses to experience the sounds of lyre birds, rocks and the sun, set to visuals shot in the mountain canyons.

Hinterding has long incorporated electricity into her work after discovering how to make the sound of magnetically charged rocks audible. In Black Canyons these rocks will be wired into the trio’s mixing desks alongside live electric guitar and “traditionally amplified” sound. The result, Haines says, is experimental sound that has as its core the sound of the landscape. “It’s like an abstract sound painting!”

As musical influences go, the trio grew up on a diet of Steve Reich, post-punk music and experimental filmmaker and musician, Tony Conrad. Morley is a respected visual artist and musician who recently recorded and toured with Sonic Youth founding member, Kim Gordon.

“We’re all firmly on the inside of the art world, but on the outside of other ones, which is great because it means our art has the integrity it deserves,” Haines says.

Haines recognises the art they create isn’t your standard oil painting, but says they have a loyal and diverse following.

“It’s for anyone interested in sensation, aesthetic experiences or the form of music being challenged ... hopefully this sort of work is tuned to people who want to think about things as much as they want to experience them.”

Black Canyons is on Saturday October 31 at Campbelltown Arts Centre.