Could we be witnessing a revitalisation of Sydney’s nightclub scene? One after another, we've watched Sydney's nightlife institutions close. But a handful of favourites are reopening, rebranding and fighting against the lockout laws.

The latest to announce a comeback is Hudson Ballroom, otherwise known as Plan B and before that, Goodgod Small Club. Located in the CBD, Hudson Ballroom could be the venue we’ve been waiting for.

Hudson Ballroom is a partnership between Clark Mak, two silent partners and Nathan Farrell, who manages musicians such as [Thundermentals] and [Tuka]. Mak bought Goodgod in late 2015 and, during a 10-day scramble to reopen the venue, renamed it Plan B. For the owners the name was quite literally the “plan b” until the long-term project of reinventing the space was realised.

“The intention to relaunch and rebrand was written in the stars,” says Joe Muller, entertainment programmer of the Hudson Ballroom and general manager of NFE (Nathan Farrell Entertainment). “We’ve done it now because the timing is right, the space feels like it’s coming into its own and we’ve got a solid community of people who come down week to week.”

The club promises to continue doing what it does best: dance parties.

“In many ways we are continuing to work with the same promoters … it’s business as usual, but because there’s such a groundswell it felt like the right time now,” says Muller.

The most exciting part of the rebrand? The new generation of patrons it is bringing in. While lockout-law restrictions have crowded the conversation about Sydney’s nightlife, Muller assures us the space never fails to draw a crowd of young musicians and punters from Wednesday through to Saturday.

“It is important that we champion the venues that are open and music events that are happening. There are so many people who have been a part of the club throughout its incarnations but we’re really excited about the future of Sydney’s music culture,” he says. 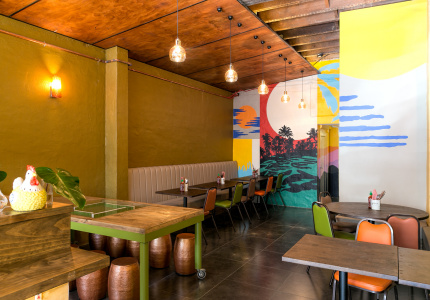