How To Be Happy

When yogi Sammy Veall got a tattoo that read “To be happy” at 18, she never imagined how hard that would be in the coming years. 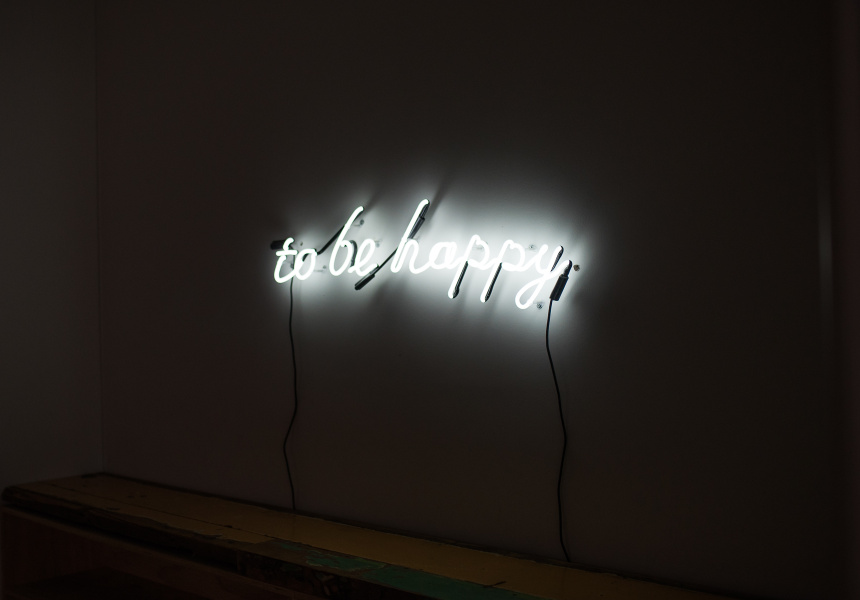 “It just exploded onto me," Sammy Veall recalls. “The guy I was standing next to, he just got singed hair. I had my hand right on his shoulder, and I got completely burnt.”

Owner of the popular Yoga 213, Veall is known to many for her unique approach to her practice – yoga to a soundtrack of hip-hop. Just two years before opening the studio she suffered third-degree burns to 35 per cent of her body.

She was 21 years old when the accident happened, living in New York and studying acting at the Lee Strasberg Theatre and Film Institute. Struck with a bout of homesickness, she travelled to Australia for a quick visit, squeezing a friend's 21st into her itinerary.

As the birthday wound down, Veall joined her friends around a burned-down bonfire. Across the dying embers someone was mucking around, flicking petrol onto the remnants of the fire.

The next thing she knew she was alight, just for a few seconds but it was enough to damage her legs badly.

“I remember my family walking into ICU and they just started crying,” Veall recalls. “I was like, “I'm fine”, because I couldn't see myself.”

For nearly a month she lay in hospital on strict instructions not to stand for fear of splitting her stitches. Never one for inactivity, she soon grew restless.

“One time I just got up the courage,” Veall says. “No one was in the room, and I just said, ‘I'm going to get up and I'm going to start walking’.”

She did, and her body started to heal. As summer approached, though, Veall dreaded the coming months of warm weather, days at the beach, shorts and bathing suits. She didn’t feel ready to show her scars to the world.

Instead, she headed to LA, resolute on giving acting one last shot. However, the physical fallout of her accident still plagued her. The skin grafts made her limp and she suffered constant nerve pain akin to, “a thousand ants biting you.”

Three weeks in, desperate to get back to some form of exercise, Veall went along to her first hip-hop yoga class at Steve Ross’ studio. After just one session she knew she needed to quit acting, and the next day started intensive yoga-teacher training.

The three-month course was hugely effective physical therapy. In just a few weeks, her skin stretched enough to stop her limp, and the tingling all but vanished.

When her training in LA finished, Veall wasn’t quite ready to come home yet. Instead she flew to Bali for an extra month of yoga. It was there the idea for Yoga 213 came to life. Between sessions, she pulled together her business plan.

Now just a few years later, she’s heading up her own successful studio and is even releasing a line of yoga apparel, collaborating with designer Charlotte Grigg.

Sitting at the desk of her South Yarra studio, Veall is in her element. Across the room a sign her partner, Luke Henley, designed bears her motto, “To be happy”.

She says she’ll sometimes get emails from her students, thanking her for helping them through a tough time in their lives. It feels as though she’s been able to pass on some of what Ross’ classes gave to her.

What has she taken away from everything she’s been through?

“Knowing that if something bad happens, it’s always going to pass. I think that’s been my biggest lesson from the accident,” Veall explains.

“I never fought anything, I just let things happen. I think when you do, when you just believe in yourself, it just falls into place in the end.”

No matter what your next move is, the HostPlus Digital Member’s card makes it easy to take your super with you. Download yours today.