The January 15 concert will honour the late musician and pay tribute to Scott Marsh’s mural in Erskineville. It’s also a timely reminder of the power of community spirit in the face of darkness. A curious piece of pop-music history was made recently when Wham’s festive-season classic Last Christmas made it to the number-one spot in the UK charts, 36 years after the song was released.

It’s evidence of the enduring popularity of George Michael, the iconic singer-songwriter who co-founded the pop duo in 1981 with Andrew Ridgeley. Decades after Wham disbanded – and four years after Michael’s death – his catchy, emotionally complex songs continue to resonate.

That love and affection is felt here in Sydney, too. Look no further than the community’s embrace of the two-storey mural of Michael that musicians and housemates Paul Mac and Jonny Seymour commissioned for the side of their Erskineville home in early 2017.

The mural by street artist Scott Marsh depicted Michael in saintly rainbow-hued garb holding a large spliff. But it quickly took on significance far greater than Michael and his music, becoming a symbol of hope in the months leading up to the same-sex marriage plebiscite in November 2017. Although Australians ultimately voted to legalise same-sex marriage, the national debate had a lasting detrimental impact on the LGBTQIA+ community.

So you can imagine the devastation felt by the queer community and allies when the mural was crudely defaced in late 2017 by a group of young men who claimed it violated their Christian faith.

The mural, its symbolism and its coalescing effect is the inspiration behind The Rise and Fall of Saint George, a concert of 15 original songs – with music by Mac and lyrics by multi award-winning playwright Lachlan Philpott – that will be performed on January 15 as part of the Sydney Festival.

“The mural and the stories around it seemed a good way to cover a part of Australian history that is particularly important … it’s not forgotten, the things people were asked to put up with for a decision that could so easily have been made in a less harmful way,” Philpott tells Broadsheet.

The friendship between Mac and Michael is well documented – Michael would often spend summers in Sydney and the pair regularly collaborated on musical projects. But Philpott felt it was the story of Michael himself – along with the mural and its destruction – that would have the biggest impact.

“We’ve gone back to what made that story speak to people at that moment: the role the mural had in this community, the shock of the destruction of something that wasn’t doing anyone any harm in the first place.”

For their first collaboration, Mac and Philpott wrote a series of songs and musical compositions that were performed at Mardi Gras in 2019 and Melbourne’s Midsumma Festival in 2020. They’ve expanded the concept for this year’s Sydney Festival, with renowned dance-theatre director Kate Champion directing.

The 65-minute show incorporates an eclectic mix of musical styles – from the electronic-pop Mac is renowned for to Gilbert and Sullivan-inspired comic opera. The Inner West Voices community choir (reduced from 90 to 30 singers due to Covid restrictions) will perform alongside seven Sydney-based artists, including Ngaiire, Marcus Whale, Jacqui Dark and Andrew Bukenya (who also hosts the festival’s Darlo Supper Club). Philpott will join his fellow choristers on stage for the first time and Mac will be on stage throughout.

“People ask, ‘What is it you’re making? Is it a concept album performed live? Is it an oratorio?’ We still don’t really know what it is, except it’s live music with a theatrical and audiovisual element – but I don’t know if it needs a label,” says Philpott.

What it is is a show that reminds us of the power of community spirit in the face of darkness. It’s a story of resilience and hope. It’s a story everyone could learn from right now.

“The story of what happened to the mural is such an interesting way to remember that part of history and the damage that can happen to a community, but also how a community can come together and get over a trauma,” Philpott says.

As for the mural, it seems Marsh has had the last laugh. “It’s just been redesigned by Scott for all to see. Now George is riding in on a unicorn, it’s a very powerful image, a lovely ‘fuck you’ and a beautiful work of art,” Philpott says, chuckling.

The Rise and Fall of Saint George will be performed at The Headland, Barangaroo as part of the Sydney Festival on January 15. The event is sold out, but you can join the waitlist or watch it via livestream. 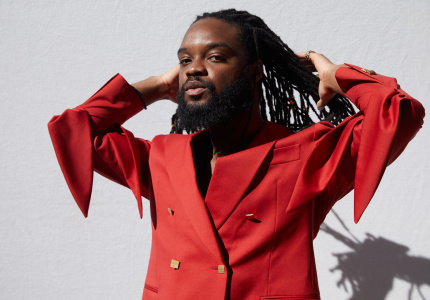