A Garden of Earthly Delights

Pleasure Garden is a kinetic sound sculpture; as you move, so does the music. See a live performance by its creator at dawn tomorrow, as part of Sydney Festival. In Sydney Festival’s ethereal Pleasure Garden, each listener becomes an instrument. The verdant gardens of Vaucluse House have been transformed into a luscious soundscape, where different musical layers are triggered by human movement. It’s a mystical and intensely personal experience.

This kinetic concept was conceived by Genevieve Lacey, globally recognised for her virtuosic recorder playing and ambitious sound projects. Collaborating with a small creative team – namely Norwegian co-composer Jan Bang – Lacey has spent the past year devising and recording the many elements of Pleasure Garden. She says the project represents the “coming together of many strands” in her life.

“It combines old music that I love, and new music that’s improvised and electro-acoustic,” Lacey says. “So it’s sort of a bridge through time and space ... You’re never quite sure what’s real and what’s not. I like the idea that being here opens up your senses.”

Lacey spent her early childhood years in Papua New Guinea where she watched her mother devote herself to the family garden. In this time, she was also uncovering the prolific works of 17th-century Dutch composer Jacob van Eyck. Lacey has since felt a “lifelong connection” to van Eyck and his music; Pleasure Garden can be seen as a loving homage.

“I first played one of van Eyck’s tunes as a little girl and I’ve gradually been learning them over many years,” Lacey recalls. “I think they’re incredibly pure, and because he was a [recorder] player and an improviser they just sit beautifully on the instrument, so they feel incredibly natural.”

Pleasure Garden subtly weaves van Eyck’s folk melodies into the landscape, layered with surreal field recordings of birdcalls, crickets and flapping wings. These sounds float across the garden from 32 independent speakers. Each speaker is disguised as a flower pot. The motion-tracking cameras are nestled in bird houses. Even the jumble of wiring has been buried deep in the garden bed.

“The idea is that the technology disappears, that you don’t even know it’s there,” Lacey says. “It’s about trying to create experiences or spaces where people can just be, and think, and dream.”

Pleasure Garden will run from January 7–26. Entry is free. Genevieve Lacey will be play a dawn performance on January 9 at 6.30am. 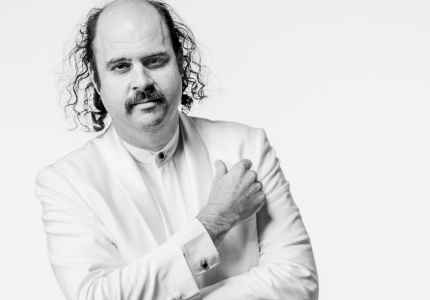