And suddenly it’s July, the cold has set in and our southern neighbours are having a covid spike. It’s a good reminder to stay vigilant and follow those important social-distancing and hygiene rules. (If you’ve run out of sanitiser, see our guide, here). If you want reminder of what you can and can’t do in NSW, here’re the latest restrictions guidelines. Stay safe, Sydney. This is what Che-Marie Trigg, Broadsheet Sydney assistant editor, and myself will be up to this month – follow my adventures here.

For those with a hankering for Vietnamese food
It’s not in Sydney’s usual Vietnamese food hubs, and it doesn’t serve straight-up traditional Vietnamese food, but Banh Xeo Bar is one of the city’s best Vietnamese eateries. It’s in Rosebery’s Cannery and serves abundantly tasty food and interesting spins on the greatest culinary hits from the Southeast Asian country, among other things.

As you can gather from its name, its speciality is banh xeo, fermented rice flour crepes, and on my last visit it was selling a special stuffed with hunks of free-range Berkshire suckling pig. The giant, crisp savoury pancake was generously packed and outstanding. And, as a fish burger and banh mi fan, I was also excited to order the crunchy crumbed-fish roll, with thin slices of chilli, coriander and a robust sauce. Benjamin Sinfield is behind the food. Before opening this modern eatery with his partner (in business and in life) Tanio Ho, he worked at Ester, Fred’s and London’s renowned St John (which is where he met Ho). You can see those mad skills coming through with everything they do.

And a bonus: you can BYO. The Cannery’s Drink Hive opposite is a pretty decent bottle-o, too, so that’s handy.

And two Surry Hills eating and imbibing venues to check out
Surry Hills dining-out fans (there’s a lot of you, the data proves it), we’ve got some good news: a new charcoal chicken restaurant, bar and takeaway joint has opened on Crown Street. It’s by the very capable Nour crew (also nearby) and has nailed the casual vibe for this almost-post-lockdown era. If you want some dish suggestions, may I suggest you order the lamb kibbeh (bulgur, minced onions, finely ground meat and spices) san choy bow and the brisket-shawarma tacos with zhug. (Where have you been all my life, zhug? This Yemeni hot sauce is similar to chimichurri but has a fresh capsicum kick).

And for a drink, you can walk the couple hundred metres to Four Pillars Laboratory (also on Crown Street) – the new Sydney outpost for award-wining Yarra Valley-based gin distillery. Find the discreet entrance on Fitzroy Street and then ascend the stairs to Eileen’s Bar where it would be remiss of you not to order a Martini and a couple snacks. Some of the food here uses gin and gin by-products, such as the crisps, which are hit with a salt and gin vinegar.

Wellread book subscription service is making it extra-easy to be well read
Fact: receiving packages in the mail is exciting. It’s not the only reason Broadsheet Sydney assistant editor Che-Marie Trigg signed up for Wellread’s book subscription service, although she says you are guaranteed a delivery every month (depending on which subscription you choose). “It’s also a real joy lifting the sticker on each month’s brown paper bag to find the book inside. The latest was Rodham by Curtis Sittenfeld, an absolute cracker of a story that explores an alternate reality in which Hillary Clinton didn’t marry Bill.”

She goes on: “Even better is Wellread’s latest launch: four packs of three books to educate ourselves on racism. There’s fiction, non-fiction, children’s and combination packs, with selections in each from Australian and international writers. I selected the non-fiction pack, which includes Indigenous journalist and writer Stan Grant’s Talking to My Country, American author Ta-Nehisi Coates’s Between the World and Me and British writer Reni Eddo-Lodge’s Why I’m No Longer Talking to White People About Race. And if you needed another excuse to drop cash on a pack, 10 per cent of sales goes to the South Coast Writers Centre’s Indigenous Literacy Project. Find them here.”

Toasties and wine
More July tips from Trigg: “In my opinion, it’s pretty tough to make a bad toastie – just whack some ham and cheese between bread, toast ’til gooey, and you’re sorted. But now we’ve seen the toastie creations by the likes of Mitch Orr (ex-Acme, Cicciabella) and Mark LaBrooy (Three Blue Ducks), I’m feeling a little underwhelmed by my past toastie decisions.

“Cult winery Unico Zelo has enlisted the above chefs, and six more, to craft their ultimate toastie. You have a month to make all eight at home and judge them on criteria such as melt-pull and crunch. Pick your favourite, and you’ll go in the draw to win a dozen bottles of the winery’s Esoterico, a smashable, skin-contact amber number. Unico reckons it goes perfectly with a toastie, and we are all about that highbrow-lowbrow combination.”

Get your hands on limited edition Le Creuset and the recipes to cook in it
Owning a Le Creuset enamelled cast-iron pot says to the world, “I’m an adult”. On July 15, it’s releasing a limited edition 24-centimetre casserole dish that it’s creatively named “The Marble” because, you guessed it, it’s inspired by marble from Italy. It’s pretty cool, I reckon, and perfect for making any one of these 13 slow-cooking recipes we recently published. There’s a couple goodies by Sydney chefs in that list, including the signature lamb by Matt Moran at Chiswick, and the spiced pork shoulder with spring onion pancakes and Asian slaw by Bill Granger of Bills.

Get Chinese-restaurant classics delivered
Necessity is the mother of invention, and during these pandemic times we’ve seen a whole lot of incredible innovation from Sydney businesses. One of our recent favourites has been Season’s – a Haymarket grocer – which has gone online for the first time in 38 years. Not only can you get farm-fresh Asian veggies, noodles, kimchi and condiments delivered, but the grocer has also teamed up with iconic Sydney Chinese diners such as Palace Chinese and Chinatown BBQ Kitchen so you can eat their menu items at home. Season’s delivers across Sydney.

Buy this canned cocktail and dream of summer
Pasan Wijisena of Jacoby’s tiki bar in Enmore has made a canned Mai Tai in collaboration with Curatif. It’s a mix of Plantation rum, orgeat (almond syrup), curaçao and fresh lime juice and is practically sunshine in drink form. There’s also a Bloody Mary and Espresso Martini by fellow Sydney bar and distillery Archie Rose. Curatif uses a zero oxygen facility to can these drinks, topping it with nitrogen before it slams it shut so it can last 12 months on the shelf. Not that you will want to wait that long.

And if you’re looking for a new TV series
I’ve been making my way through SBS’s Natural Wines With Clovis series and even though I’m enjoying the ride, I still don’t really know how he convinced someone to let him make it. Clovis Ochin is a natural-wine specialist based in Paris and in the first episode he throws a wine party, pours lots of delicious-looking wine, eats great food and hangs out with his friend, American rapper, chef and wine-enthusiast Action Bronson (who Clovis has spent time with in Bronson’s Vice show). From there, Clovis goes on the hunt for the best vino he can find, chatting shit with people and drinking and eating more. Four stars. 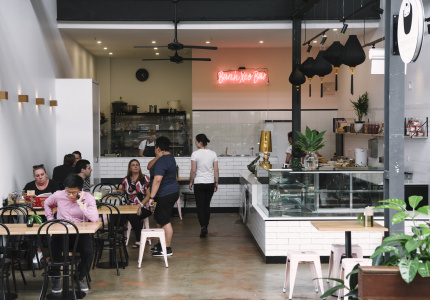