Editor’s Pick: The Best Things to Do in Sydney in July

The places, events and things we’re excited about this month. Get your calendar out – you have plenty to choose from. 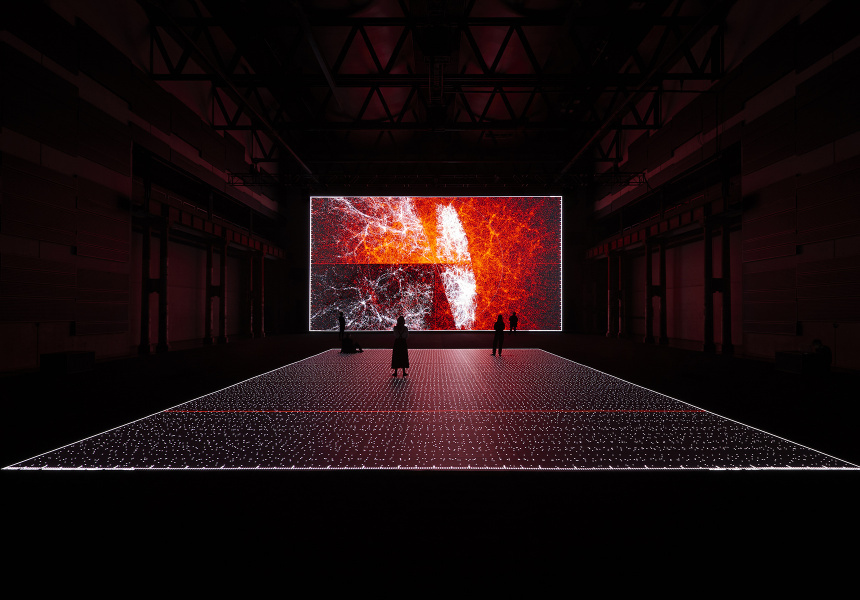 From a massive night-time winter food market, to a mammoth hypnotic installation and a niche coffee competition, here’s what the Broadsheet Sydney editor Sarah Norris is most looking forward to this July.

Micro | Macro
“Terrifying” and “mesmerising” is how people have described Carriageworks’s latest large-scale installation by Japanese light artist Ryoji Ikeda. A friend, who saw it last week, said she was unable to spend more than 10 minutes in the room and that kind of makes me want to go even more.

Sydney is just the third city in the world to get a chance to experience this immersive exhibition, which was developed by the Paris-based artist during his residency at CERN, the European Organisation for Nuclear Research in Switzerland. You get a sense of the scope of this ambitious piece when you learn more about the organisation, which mucks about with instruments such as the Large Hadron Collider to unearth secrets about the fundamental structure of the universe.

It’s only showing until July 29, so get there soon.

Bistecca
We joke at Broadsheet that there’s a handful of characteristics that, if featured by a new venue, will get the city’s attention. If it’s hidden, down an alley and has a neon sign, that’s the trifecta.

Bistecca might be missing the neon, but to get to this subterranean CBD restaurant, you must first find the door at the end of an alleyway, then take a flight of stairs down. There you will discover the latest diner from the team which brought us one of my favourite bars, The Wild Rover, as well as Grandma’s, which, when it opened, was one of the city’s first small bars.

The menu is … limited. There’s only one main: steak. Or to be specific, bistecca alla fiorentina, a T-bone traditionally cooked, originally in Tuscany, over coals and served rare.

And I reckon that sounds pretty cool.

Burning Love at Carriageworks
Carriageworks’s semi-regular night-time food market returns this month, and this one, Burning Love, is curated by Elvis Abrahanowicz and Ben Milgate of Porteño (and the always excellent Bodega, plus other venues). It will feature 55 (55!) of Sydney’s best restaurants and drink purveyors, as well as music and cooking demonstrations.

You need a game plan to get the most out of this notoriously busy night market. Here’s my must-do tip: upon arrival, grab a drink from Giorgio De Maria Fun Wines or one of Sydney’s best bottle shops P&V Wine and Liquor Merchants, and let the mad after-work rush subside.

I’ll be looking out for the stall by Fratelli Paradiso and 10 William St – they had what I thought was the best dish at the event Kylie Kwong curated last summer – as well as Marta and Continental Deli Bar Bistro.

Etelek Pop-Up
I never knew I needed langos in my life until I ordered it at the last Etelek pop-up in 2017 at Bar Brosé. The deep-fried flatbread from Hungary was a revelation, much like Adam Wolfer’s (ex Bentley and Yellow) food in general.

He’s trying to branch out from being known as “the Jewish-Eastern European guy” with his forthcoming Etelek venture, again with Marc Dempsey (Universal, 121BC, Cornersmith), but this time at the old Gastro Park space, from July 25.

A winter’s morning run
People call this time of year Sydney’s “running season”, mainly because of the fast approaching City to Surf, happening on Sunday August 12.

Sure you might need to add an extra layer of clothing and pull on a pair of gloves, but there’s nothing better than a Saturday sleep in followed by a run to shake off the week.

If you want some insights and tips on running, watch out for Broadsheet’s guide to perfecting running, to come later this week.

Le Labo
A visit to the recently opened made-to-order fragrance store Le Labo on Gould Street in Bondi might be more about our wish list than an actual purchase, but there’s nothing wrong with that.

What we like about the New York perfumery is it blends your scent on the spot and prints you a personalised label.

Australian AeroPress Championship
Super coffee nerdy, and super niche, but there’s something so endearing about this event.

Kicking off later this month and running across the country, this is the annual hunt for Australia’s best AeroPress coffee maker.

Competitors have eight minutes to prepare, brew and present a coffee to a panel of three judges. Those adjudicators then answer one question: Which cup would I prefer to drink?

“On the count of three, the judges simultaneously point to their favourite coffee, moving the winner on to the next round while eliminating the losers,” says Kershia Wong, co-ordinator of the World AeroPress Championship.

Whoever wins the Australian leg goes on to represent the country in the world title event, taking place in Sydney for the first time in November.