The Guru Dudu silent disco walking tour is coming to Bondi, then beyond. 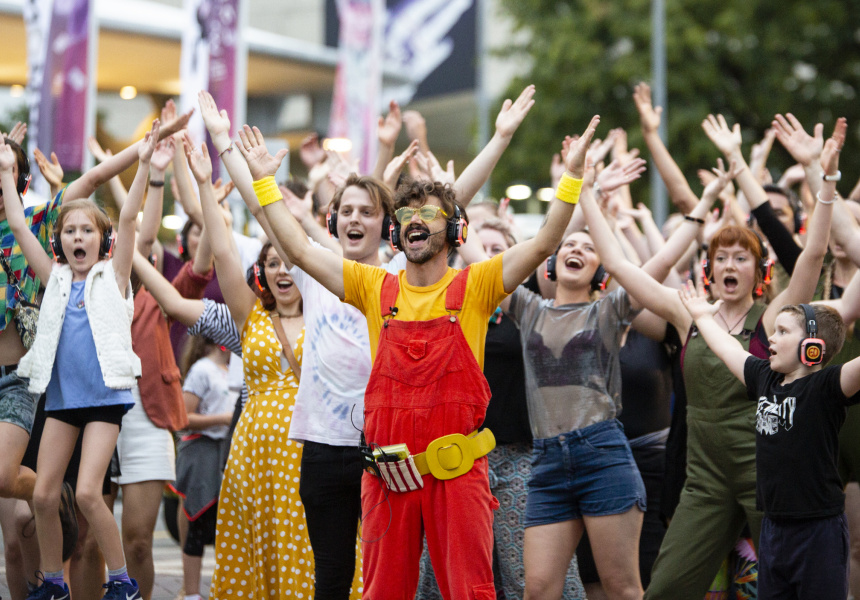 It all started in 2013 when David Naylor threw a birthday party at Melbourne’s Edinburgh Gardens. He sent friends and family a playlist beforehand, and when they got together in the park he told everyone to simultaneously hit “play” on their devices. What happened next was spontaneous dancing and singing, and that mini dance festival led him to create a more organised silent-disco operation.

Guru Dudu is its name, and Naylor has since hosted unscripted frolicking sessions around Australia and the UK. Unlike static silent discos, it’s a tour, taking punters around streets and local landmarks, and using commentary and interpretive dance routines to reimagine well-known spaces. Guru Dudu will be at Bondi Feast from July 12 to 21 for a series of tours around the beachside suburb, then there are plans to host events more regularly across Sydney.

“I'm very excited,” says Dani Cabs, a tour guide who’ll be handling the Sydney expansion and who goes by the name “Dani Disco”. “Two weeks ago, I was a bit nervous, but now I can’t wait ‘til we hit the streets,” he told Broadsheet.

While each guide has their own signature style, Cabs starts his sessions by explaining that the tour is a safe space for everyone’s personal and artistic expression. “There’s no judgment here; it’s about you expressing yourself … with respect to everybody else,” he says.

He then gets everyone to put on (supplied) headphones and warm up with some music and freestyle dancing. Once the group’s ready and everyone’s shed their inhibitions, it’s time to hit the streets.

The playlist differs depending on who’s on the tour – there’s music from the ’70s to the naughties, interspersed with commentary from Dani Disco – but there are a couple of songs that always get the crowd going.

“I use Mamma Mia for singalongs, everyone loves it,” Cabs says. “Beyoncé also gets a lot of people going, and who doesn’t loves Backstreet's Back? No matter the age group, Spice Girls is always a hit. And a personal favourite of mine is Get Down On It [by Kool and the Gang].”

Aside from teaching everyone flash-mob dance moves to hits like Single Ladies and Holding Out for a Hero, Cabs also gives individuals time to shine in the spotlight. The session runs for an hour and punters will walk and dance their way around the festival site, as well as the beach and a couple of nearby streets.

They’re still working on the details for the regular Sydney tours. “Bondi is a great area; Newtown would also be great, “says Cabs. “So would Darlinghurst, Paddington, and the city of course, through Pitt Street and all that. Maybe we’ll do one week somewhere; the next will be somewhere else. There are so many good spots in Sydney.”