The Chaser Stars in Neville’s Island, a War on Team-Building Exercises

Reuniting for a play that lets them do what they do best – make you laugh. 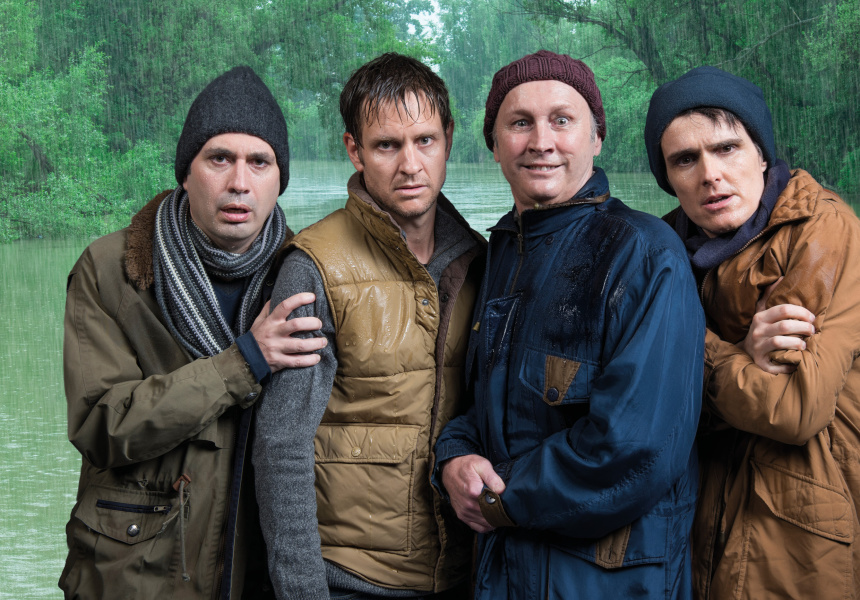 The Chaser has built a career out of lampooning incompetence, so it’s no leap that three of its members – Chris Taylor, Craig Reucassel and Andrew Hansen – were drawn to Neville’s Island, Tim Firth’s comedy of white-collar ineptitude that opens next month at the Ensemble Theatre in Kirribilli.

The play’s premise is simple: an office’s team-building weekend camping trip is quickly derailed by a trifecta of terrible planning, office politics and awful weather. Really, really awful weather – when Neville’s Island played on West End in 2014, the first few rows were issued anoraks, though there’s a no-splash zone in the Sydney show.

Instead, Taylor and co will take five-minute showers – costumes and all – before heading on stage, with buckets of water each side to “re-douse” before entrances. And while the idea of shivering through performances during an icy July isn’t terribly enticing to Taylor, he’s excited by his chance to play mean with his character, Gordon.

“Gordon is an unbelievably unlikeable man,” says Taylor. “They’re confronted with a crisis, and rather than pitch in and help them survive, he basically just spends the entire time belittling the other three men, and takes great delight in belittling them.”

“[He’s] a bit like Larry David in Curb Your Enthusiasm, where Larry just spends the whole time shouting at people and getting into scrapes. That annoys a lot of people, but the thing about Larry David is that he is always right.”

As for who’s wrong, that’d be the hopeless Angus (Reucassel), the feverishly religious Roy (Hansen) and the slowly falling apart team leader Neville, played by Ensemble veteran David Lynch (no, not that one). It’s the sort of set-up in which, in the right hands, becomes a cracker comedy: currently, the team’s playing to its strengths and adding in a dash of that Chaser charm.

“The idiom of the play is so British, especially Gordon – he’s very dry and sarcastic, which is a very English type of humour,” says Taylor. “I find even when rehearsing it, I slip into a British accent because the language is so British … so we’re re-writing the jokes to give them that laconic Australian tone and feel.”