Carole: Landing the Role of a Lifetime

She’s played Audrey in Little Shop of Horrors and Bart Simpson in Mr Burns. Now Esther Hannaford tackles one of the most iconic singer-songwriters of all time. 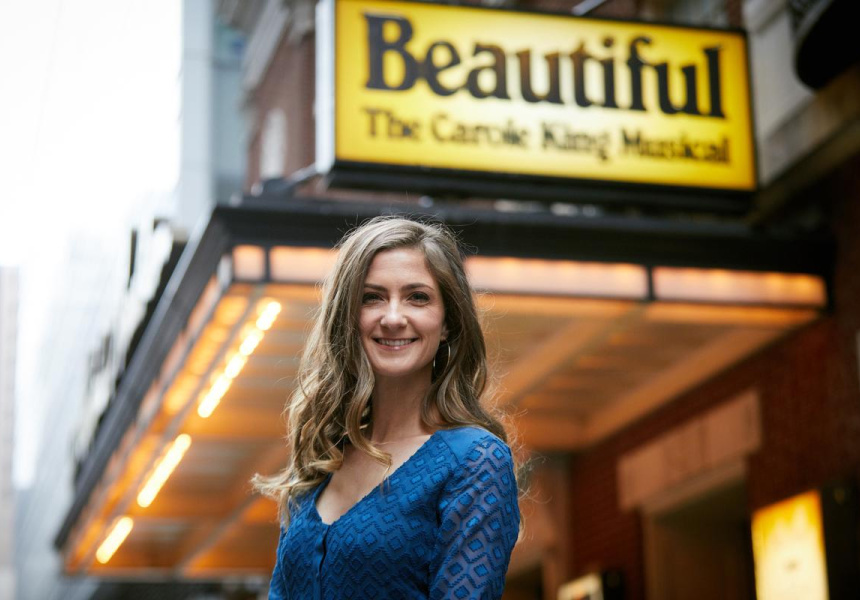 Esther and cast in the rehearsal room

If there’s one place in the world to find out you’ve landed the role of a lifetime, it’s New York. That’s where Australian music theatre performer Esther Hannaford was when she received the news she would be playing one of the 20th century’s most influential artists, Carole King.

If you’ve ever heard the songs I Feel the Earth Move, (You Make Me Feel Like) A Natural Woman, The Locomotion or the Grammy award-winning You’ve Got a Friend then you’re familiar with the genius that is King.

But if that’s the extent of what you know, you’re not alone. The American singer-songwriter is one of the most prolific pop songwriters of our time, yet her story has remained largely untold. Until now.

Little surprise, then, that before Hannaford auditioned for the upcoming biopic Beautiful: The Carole King Musical she immersed herself in the life of the enigmatic woman who was behind more than 100 hit singles and six Grammy Awards.

Hannaford’s audition tape reveals how uncannily she captured the compelling mix of vulnerability, shyness and passion that makes King’s such an absorbing story. Hannaford was in New York, watching her partner and former King Kong co-star Chris Ryan perform alongside Cate Blanchett and Richard Roxburgh when she received the phone call that would change her career.

“Chris was doing The Present on Broadway which was super exciting and I was waiting to find out. Luckily, thankfully, it happened,” she says. She immediately rushed out to buy tickets to see the dual Tony award-winning show Beautiful to see the world she would soon be inhabiting.

Hannaford was captivated by the twists of the early life of the young New Yorker, who sold her first hit Will You Still Love Me Tomorrow when she was only 17, and within just three years was writing chart-topping hits for the biggest acts in the country: The Drifters, Aretha Franklin and The Monkees among them. More recently, Kylie Minogue, P!nk and Lady Gaga are among the 1000-odd artists who have recorded her songs.

Behind the extraordinary success is a woman who simply wrote because she loved it, and whose chief ambitions were to settle down with a husband in the suburbs and become a mum. She achieved this much younger than expected, and had had two children by 19, marrying her first love and fellow songwriter Gerry Goffin (who co-wrote hits such as Will You Still Love Me Tomorrow and One Fine Day). Then it all tragically combusted.

Suddenly King found herself heartbroken, divorced, a single mother who had lost her confidence along with her marriage. Astonishingly, she managed to pick up the pieces and made her Carnegie Hall debut, singing songs from her second solo album, Tapestry, which would win four Grammy Awards and ultimately sell 25 million copies.

Hannaford says she is still discovering just how prolific King was. “Even now I’m finding these little gems and thinking, ‘Oh my god – you wrote that as well?’ It’s sort of outrageous really,” she laughs.

In preparation for the role she devoured everything she could lay her hands on, including King’s biography A Natural Woman, which reveals the music she was listening to, the clothes she was wearing, even the poets who were influencing her at the time. “She was super self-deprecating, had a lack of self-esteem when it came to her appearance and was always seeking personal approval from other people. I’m actually finding it really challenging because for a good third of the musical she stays somewhere which is quite uncomfortable because she doesn’t think she deserves better.”

An award-winning singer herself, Hannaford is at pains not to try to copy King’s vocal style. One of the more demanding parts of the role has been getting her piano playing to the point where she can comfortably sing and play at the same time. “It’s a challenge I haven’t had before, so that’s great. You feel much more connected with what she wrote when you do.”

There is always the chance that King, who at 75 still lives in the US, will suddenly turn up at a show. She famously did so during the Broadway run, surprising the audience but especially the cast by slipping on stage during the curtain call. For Hannaford, this would be the icing on the cake.

“I know there are whispers about it,” she says. “That would just be the most outrageously awesome thing to happen! But no pressure, I guess.”

Beautiful: The Carole King Musical plays at the Sydney Lyric Theatre from September 17.